Fishes are equipped with a range of senses. Vision is an obvious one. Research has shown that different fish species see different colours better, even into the UV part of the spectrum. Most fish can also sense vibrations (‘hearing’) to a greater or lesser degree through their lateral lines, ears, and swim bladders. Sharks and rays are particularly sensitive to the minute electrical fields put out by living creatures, and some species use this facility to hunt out prey buried under bottom sediment. Many fish also have a good sense of taste.

One of the primary senses for most (although not all) fish species is smell. Technically called ‘olfaction’, smell is a major sense and is used for many different things. These include: finding a home area or a spawning ground (in recent experiments some sharks have been shown to use their sense of smell for navigation); recognising other fish of their group or species; when spawning; and for avoiding predators. But probably the most important use, from an angler’s point of view, is for locating food.

We humans have a relatively modest sense of smell. Some Pacific Island fishermen I know seem to have a ‘nose for fish’ and claim to be able to identify areas of fish activity by the ‘fishy’ smell. Occasionally I can get a whiff of this myself – the odours from the oils released by baitfish after being smashed up by predators. Dogs, by comparison, live in a world dominated by scent and are estimated to have a sense of smell between 1000 and 10,000 times better that ours, depending on the breed of dog. We put this ability to use for our own purposes in many ways: the various types of detection dogs used by customs and police are examples.

But some species of fish have a sense of smell an order of magnitude better than this again, enabling them to detect, identify and react to chemical odours in water of just a few parts per billion. Fish noses are different in structure to ours. They are used exclusively for smell, are self-contained, and don’t connect to the throat. Most fish species have two ‘nostrils’ – pits – in front of their eyes. Each of these organs has two openings (called a ‘naris’) – an ‘in door’ and an ‘out door’ – which see water rapidly directed through a tunnel between the openings. Each tunnel is lined with sensory organs called lamellae. Lamellae collectively form a structure called an ‘olfactory rosette’. The detection of various chemical compounds triggers a neural response that is transmitted to the olfactory lobe of the brain. This arrangement allows fish to rapidly and constantly analyse the water around them.

These structures, particularly the number of lamellae in each olfactory rosette, are different in each species of fish. For example, some salmonids have fewer than 20, whilst some eel species have as many as 90 lamellae. Generally speaking, the more and bigger the lamellae a fish possesses, the better it can smell. Each species is keyed to detect and react to a different range of smells, including the types of foods that the species favours. For example, the spotted smoothhound is probably keyed strongly into the scent of crustaceans such as crabs, while other, more broad-niche feeders, such as snapper and blue cod, detect a much wider range of potential prey items. 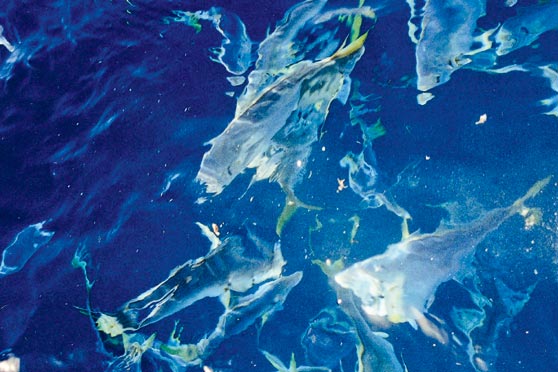 What makes a scent?

So far I’ve used terms such as ‘chemical compounds’ when referring to scents, but what actually makes a scent? There are two basic elements: pheromones and amino acids. Pheromones are used between live fish to communicate, especially during courting and mating, and to signal danger when predators are detected or the fish is otherwise stressed. They break down quite quickly in water but can have their uses for anglers. More about them when we get to ‘prey rinses’ in part two.

Amino acids are the chemicals that form the molecular building blocks of proteins, which in turn comprise the structure of all living animals. There are about 30 different types, and all animals (including humans) give them off in molecular form, the amount and type depending on physical activity and emotional state. Dissolved amino acids in water may indicate food to a fish – or a danger that should be avoided.

When fish are feeding they are vulnerable to capture by hook-and-line anglers. While feeding activity usually involves a number of senses used in combination (scent, sight and taste for example), scent is one sense that fishers can most easily exploit to improve catches.

At the most basic level, the scent trail given off by a hook-bait in a current is one way to attract fish to the hook. ‘In a current’ is a key part of this. With a reasonable current running, each hook-bait establishes its own little trail of amino acids running away from a boat or along a shore. When a fish of a species attracted to the type of bait being used crosses the scent trail, it will follow it up-current to your bait where, hopefully, it is hooked.

This is one reason why party-boat fishing can be so successful: instead of just a couple of hook-baits giving off mini scent-trails, there may be 15 or 20 baits in the water, providing much more attraction and ensuring that no matter how hot the bite is, someone always has a bait in the water, keeping the scent trail running.

By comparison, if a small boat has only one or two rods out, and a multiple hook-up or tangle takes both out of the water for a time, the scent trail is broken and any fish tracking towards you or in the vicinity of the boat may ‘lose the scent’ and move on.

Several things are important here: firstly, a decent tide or current run is needed to disperse your ‘advertising’ – scent. The old saying, ‘no run, no fun’, is a truism most of the time.

Next, you need to be using a bait-type acceptable to the species of fish you’re hoping to catch. Fortunately, many of the popular table species – snapper, blue cod, gurnard, tarakihi, trumpeter, hapuku, trevally – are broad-niche feeders that will accept a wide range of baits, including skipjack, pilchard and squid. Other species, such as spotted smoothhound and blue moki, may require more specialised baits, such as crab for the former, or mussel, crayfish or paua gut (hua) for the latter.

I believe that in addition to being a bait type that the fish species prefers, it (the bait) needs to be in reasonable condition (i.e. not rotten). I also believe that many fish have a preference for baits with a high calorific value – baits (or foods to the fish) that will provide the most energy for the effort of finding and eating them. Cut baits rich in oils and fats provide this, as well as giving off strong scent trails. This, in turn, is why, for example, baits such as skipjack tuna are so successful on snapper, even though skipjack are not a natural prey item for this species.

Finally, the bait needs to be kept refreshed for best results. After soaking for a while, much of the available scent will have dispersed and the bait will be washed out, making locating the bait much harder when a fish finally does happen along. It pays to put a fresh bait on your hook every 15 minutes or so if you’re not getting any bites. 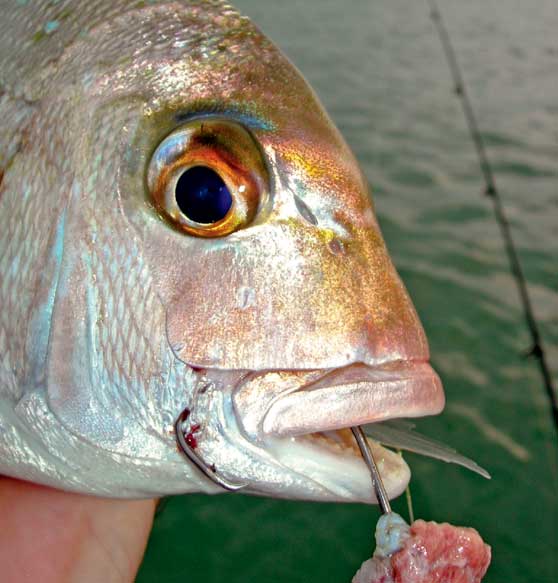 While individual hook baits can be reasonably successful at attracting fish, bulk advertising in the form of a berley trail can make a big difference to overall results. The majority of anglers, particularly boaties, would rather leave their lunch at home than the berley. The scent off a hook-bait may be like a track through the bush leading to your hook, but a good berley trail is like a super-highway!

When set up properly, fish cannot miss a berley trail, and as well as attracting them to your area, it will concentrate and hold them, even if all your hook baits are momentarily out of the water. These days it is unusual to see boats fishing without berley, but it was only a matter of 35 years ago that the use of berley was a rare thing. I saw an article about the use of berley pots in an Aussie magazine and built one for my dinghy out of PVC pipe; such devices were unheard of here at the time. It hung off the transom, and old fish scraps were pounded to pulp with a pipe ‘muncher’. The system proved highly successful, especially when stray-lining baits in shallow water. Soon berley pots became a must-have accessory on fishing boats, and then along came the commercial versions.

But there were restrictions to berley pots: in strong currents and deep water, surface-dispersed berley could end up miles away by the time it got down to bottom fish, effectively berleying them away from you. Munching up the berley was noisy, too, and keeping a regular trail going demanded a lot of attention. Over time pre-minced frozen berley bombs have become the way to go. They can be adjusted to any depth, and you can ‘set and forget ‘em’ while you concentrate on fishing. Berley bombs of various ‘flavours’ are available commercially and are a useful way for processing companies to use up waste products. Some, like the born-again Berley Mate product, do not need freezing. Or you may like to make your own out of your left-over fish scraps.

Berley is not just a way of attracting table or sport fish that you want to catch, it is also a good way to bring in the baitfish that may be the key to hooking larger specimens. The berley attracts the baitfish (ensuring a handy bait supply) and the baitfish themselves also act as a magnet to attract predators. While stray-lining baits, we often suspend a jack mackerel live bait near the berley bomb, and it pays handsomely in regular catches of delectable john dory. 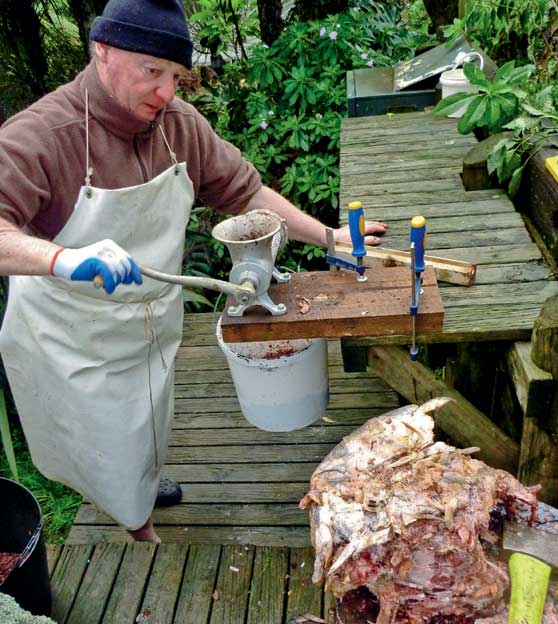 There are some basic aspects of berleying that need to be understood. 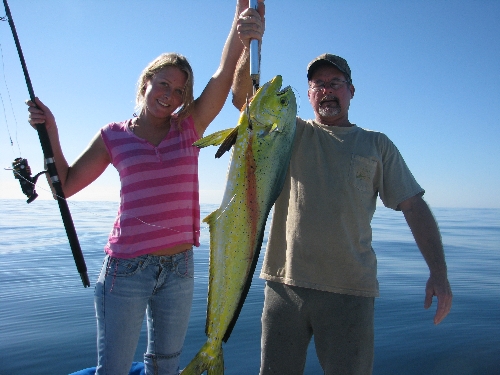 Put up a mighty good fight!!! - The Keys, Florida