There are pluses and minuses to living in our little piece of paradise at the bottom of the world. Qualified in geology and with a background of a decade working in earth sciences, Sam Mossman explains…

The tyranny of distance

Owing to its remoteness, New Zealand was the last large habitable landmass to be settled by humans. Such was the isolation of our unique islands from major population masses that it was not until around 1300 that Polynesian voyagers began to settle here, developing the distinctive M?ori culture. Others were not all that far behind. Only around 350 years later, in 1642, the Dutch explorer Abel Tasman became the first European to sight New Zealand.

‘The tyranny of distance’ was a phrase first coined by American geographer William Bunge and was later borrowed by Aussie author Geoffery Blainey (for the title of his famous book on the history of Australia) and used later again by Kiwi band Split Enz in their iconic song ‘Six months in a leaky boat’.

But distance is tyranny only in some ways. Admittedly, in the early years of New Zealand settlement, time and distance were major blocks to communication, travel, and the import and export of goods and other necessities. Letters, dispatches, passengers and freight took around four months to get from Europe to New Zealand by sailing ship in 1860. Now, you can fly this distance in a couple of days. However, despite its advantages, quick and cheap travel does make us vulnerable to things like pandemics.

These days perceptions have changed, and many New Zealanders see our isolation from the rest of the world not as a hinderance but as an advantage. Electronic communication with other parts of the planet is now instantaneous, but our physical isolation means we are more remote from other countries’ pollution, illegal immigrants and other woes. And most importantly, we have sea and air borders that can be closed and monitored (and a government prepared to do it) which has been instrumental in saving us from the worst depredations of COVID-19.

But let us not delve too deeply into NZ history at this time; its geography is just as important. From a fishing perspective, New Zealand anglers are fortunate compared with those in many other parts of the world. The reason for this is largely geographical, and in this regard New Zealand is a ‘Goldilocks’ country – many aspects are just about right.

Let us start with our latitude – our distance south of the equator. This controls many aspects of our climate, not least being the temperatures of the land and in the sea. Our climate is classed as ‘temperate’ and, up to a point anyway, we have the benefit of avoiding the worst excesses of tropical cyclones (which tend to weaken as they drop down from the tropics) and also Antarctic storms (which often lose a lot of their impact as they move north).

Water temperatures are moderate – warm enough in summer to host desirable tropical gamefish (we will get back to this in a minute) yet cool enough to support good levels of dissolved oxygen (cooler waters have higher oxygen content) – one of the bases of marine life. (As an aside, warm tropical waters have lower dissolved oxygen levels than temperate regions and are often noticeably clear, but this is only because they can support only lower levels of plankton and hence, reduced biomass of fish.)

In addition, New Zealand has a reasonably large area of continental shelf/extended continental shelf. Much of this region is shallow enough to be penetrated by sunlight, allowing the process of photosynthesis to take place and for plankton, the foundation of the marine web of life, to flourish.

As just mentioned, our cooler, deeper waters are high in oxygen content and nutrient levels. When these deep waters are forced to the surface by our continental shelf and added to the nutrient run-off from the land, there is the potential for an explosion of life.

Consequently, our waters can support a huge biomass of fish and other marine life. In the 1960’s, ‘70’s and part of the 1980’s, Asian and European countries, such as Japan and the USSR, used to send their fishing fleets halfway around the globe to plunder our fisheries before we established our Exclusive Economic Zone (EEZ). The potential of our waters is huge – if only it was managed properly. I would give a lot to experience our marine environment as it was 1000 years ago. 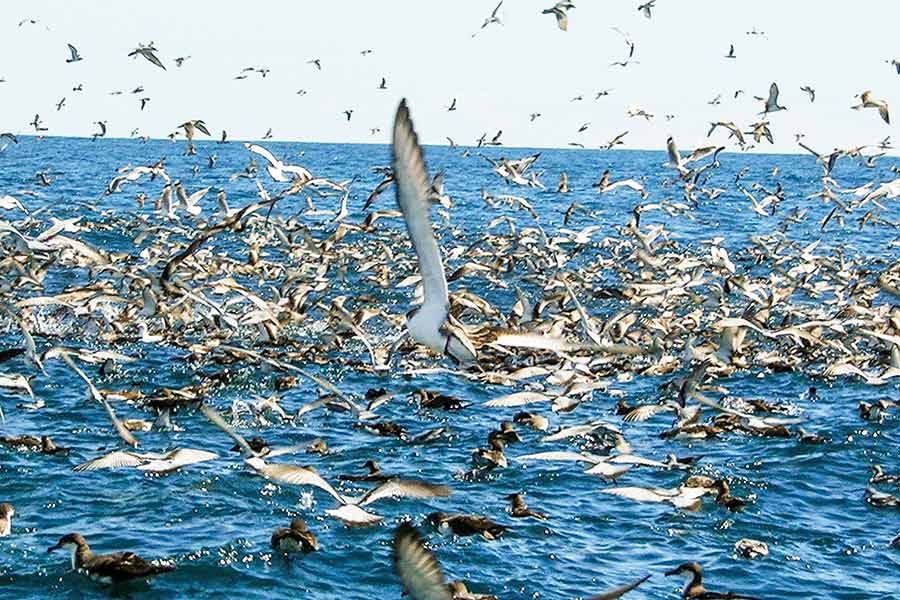 Our waters can support a huge biomass of fish and other marine life.

The lay of the land

Another feature of New Zealand geography that affects our fish is the north-south orientation of our country. We have around a thousand old-fashioned miles (1600km) of coastline lying north-south along the latitudes. Although listed as ‘temperate’, NZ coasts encompass conditions and water temperatures at times ranging from sub-tropical to sub-Antarctic, providing comfortable conditions for a wide range of species.

This long north-south stretch of coastline and its accompanying variety of temperatures, conditions and habitats may prove to be of considerable value if (as is likely) global warming continues and sea temperatures continue to slowly increase. This geographical feature could allow fish species to adjust their range southward relatively easily into cooler water if the water temperatures in their previous preferred range becomes too warm. This may even be of benefit to some species. Consider the ever-popular snapper: their best spawning success is in water temperatures of 18 degrees C and above. If ocean warming means higher water temperatures in more southern areas of the country, the potential is there for expanded snapper spawning success resulting in more robust populations of this species in the South Island. 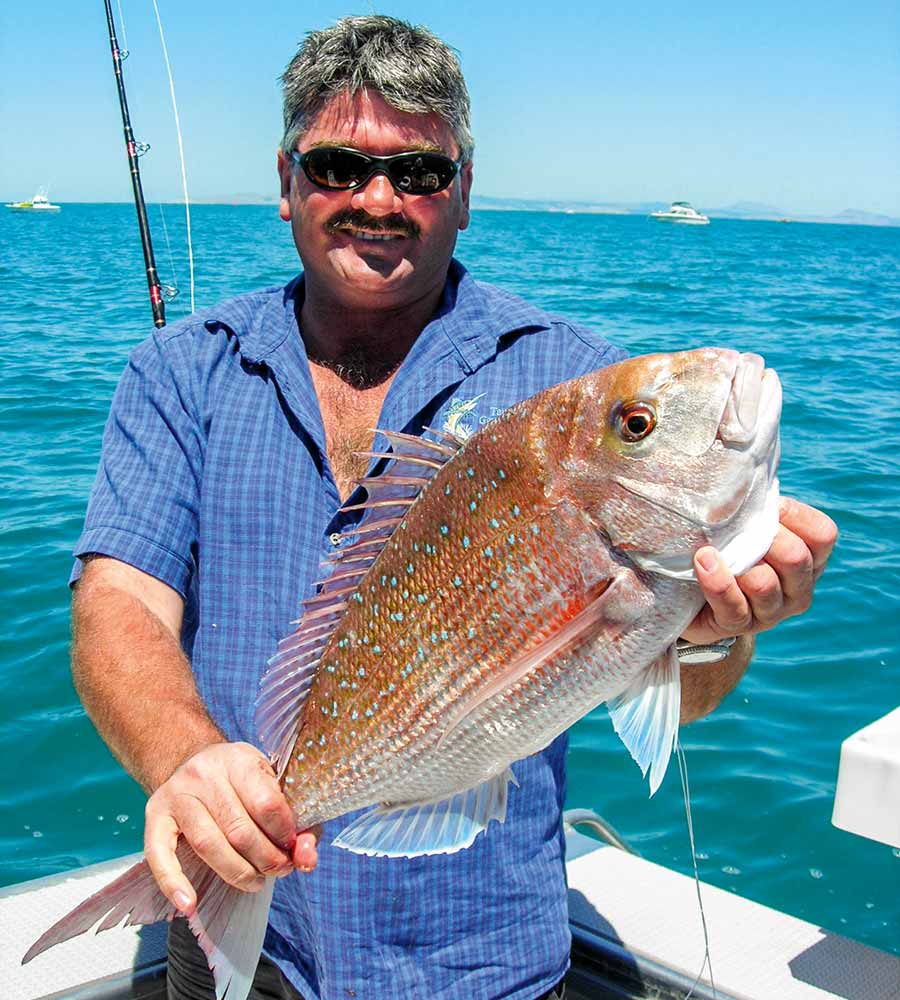 New Zealand water temperatures are around the fringes of the comfort zone for many species of tropical pelagic gamefish. Species such as marlin and some tuna and shark species only reliably find the water temperatures that they are suited to off New Zealand during our warmer summer months, and then only in more northerly regions (the top half of the North Island). Consequently, we tend to have a seasonal gamefish run starting about December and running through to around May in most years.

How this could be an advantage may not be immediately obvious, but it is one of the rules of biology that the largest specimens in any population tend to be found on the fringes of the species’ range. This may be because bigger fish swim faster and further with each tail beat, and the larger size (thermal mass) of their bodies means they can cope with cooler water than smaller fish. The payoff for larger fish that migrate the extra distance to get down to New Zealand’s waters is the easy feeding to be found in our nutrient-rich water. So, although we have a shorter gamefish season than areas closer to the equator, we tend to have bigger fish on average. Check out the IGFA world record listings for our most prominent marlin species, striped marlin, and you will see that New Zealand pretty-much owns the world records.

The fact that our waters are only marginally warm enough to host the tropical pelagic species can be seen in La Nina years of ENSO (the El Nino Southern Oscillation that effects our water temperatures). This last summer saw a moderate La Nina episode but during strong La Nina years increased water temperatures can bring exceptional fishing for game species which can penetrate much further south than normal. The stand-out season of 1998-99 saw 35 wahoo (normally a rare tropical visitor) weighed in, and several striped marlin caught as far south as Haast at the bottom of South Westland – the first rod-and-reel captures of this species ever recorded from the South Island. Slow global warming may well be having a long-term effect too, as hinted at by our ever-increasing captures of blue marlin, which are regarded as the marlin species most adapted to warm tropical waters. Perhaps rising sea temperatures in the future might see tropical species such as wahoo, mahimahi, sailfish, marlin and yellowfin tuna present in NZ waters for longer periods and perhaps even establish permanent populations off our coasts?

Fresh from the sky

Finally, the structure of our country has a great effect on our freshwater fisheries as well. Again, the north-south orientation of our landmass comes into play, along with the mountainous backbone of both our main islands. To explain: the major weather systems that affect us come from the west. This means that they pass over an expansive spread of ocean before they get here, picking up water vapor all the way. When they get to New Zealand the mountainous spines along each island force the warm, moist air to rise and when this happens it cools and condenses into water, falling on the land as rain, snow, hail etc. This is called ‘orographic precipitation’. It is all simple stuff, and it explains why the country has a lot more precipitation on its west coasts.

With a geographical set-up like this, our north-south mountain ranges are squarely across the path of west to east-moving moist weather systems. New Zealand should never be short of water and our introduced freshwater gamefish, trout and salmon, should have plenty of high-quality habitat. But rain does not always fall where you need it. We get rain shadows on the eastern side of the mountains, droughts in some regions and floods in others. A lot of this could be eased by water harvesting during flood times, more conservative water allocation in drought-prone areas, stopping exports of bottled water that deplete aquifers, and other measures. 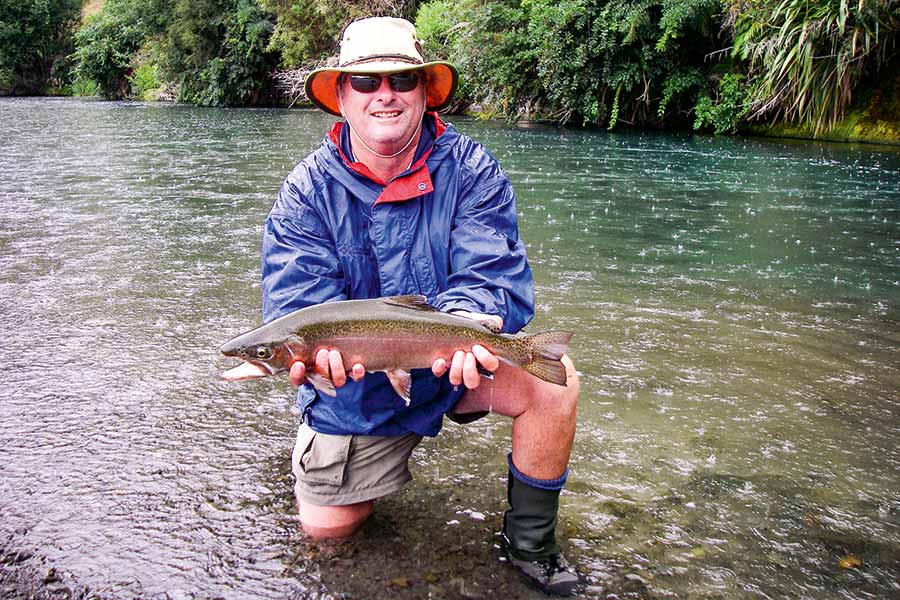 Like our saltwater fisheries, New Zealand’s geography has presented us with a near-perfect freshwater scenario. We need to manage them conservatively, with a view to preserve these gifts of geography and the brilliant fisheries they support. 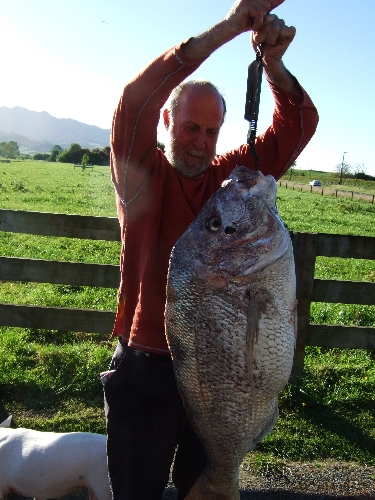