Mark Kitteridge acknowledges there are very few advantages to getting old. However, thanks to a working lifetime spent in the fishing trade and the plentiful fishing opportunities on offer, he can look back with a greater appreciation of the fishing available here in New Zealand.

We are bloody lucky! Sure, some fisheries have dramatically changed over time, but on the whole, we still have it very good in Aotearoa compared to the rest of the world.

Even better, we have so many amazing species on offer. Some fish are notable for their eating qualities, others for the challenges involved in hooking and/or playing them. The following is my countdown of the species that have absorbed and entertained me since I was a kid – and please try not to be turned off by the fact I’m starting with carp!

Much like you, I can also hardly believe carp made this list. However, when the wind is blowing too hard for sea fishing and I feel like getting away somewhere quiet and sheltered for a fish or to be in the company of a good buddy, carp fishing has its place.

It’s hard to describe the simple peace, solitude and contentment that can be found while seated on the bank of some bush-fringed pond or meandering waterway, perhaps accompanied by a chilled refreshment or two. If anyone had told me beforehand how absorbing it could be to watch a quill float or bread-crust bait as it gently bobbed around on the water’s surface for hours, I would have said they were dreaming.

It’s also a great opportunity to work out life’s problems or have a good catch-up with a mate… until your float slips beneath the water or a pair of blubbery lips comes up to slurp the bread crust down and you’re on!

Koi carp fight surprisingly well, bulldozing off powerfully and even porpoising out the water occasionally. They can grow to an impressive size - almost nine kilos is my biggest - with the current largest on record weighing over 40kg! Yes, koi carp might be an oversized goldfish, but they can be a good option when the wind is howling or some quiet, easy fishing is called for.

No, gurnard aren’t targeted for their fighting capabilities, even though a good-sized one can give a reasonably stubborn account of itself. Rather, it is their firm-fleshed, delicately flavoured fillets that make them so popular with so many fishos. Dee-licious!

Gurnard and I go back a long way - almost 50 years – to when I used to target them in Wellington from the shore. However, it was while fishing from the notoriously dangerous Castle Point cliff in nearby Wairarapa that I got my gurnard-fishing highlight: an absolute monster ‘carrot’ weighing 1.8kg!

These days I rarely fish for gurnard, but treasure those odd opportunities spent fishing for them in the inner Manukau or Kaipara Harbours in various small craft. However, I don’t like the heavy gear deployed by most anglers when harvesting gurnard in the ‘Wild West’. Instead, I deploy 4-6kg tackle, and although this does occasionally lead to some titanic battles with sharks and rays, I reckon that’s part of the challenge. Gurnard taste as good as they look!

Handsome in appearance, boasting chromed sides and black-spotted grey-green backs, salmon also put on spirited and often aerial scraps, with their delicious fillets further rewarding the successful anglers afterwards. What’s not to like?

Indeed, these gleaming beauties had filled my dreams and aspirations for many years, and were top of my ‘bucket list’, alongside broadbill and tarpon.

All the writing and videos suggested plenty of perseverance was required to catch just a single fish. I therefore still find it hard to believe that my salmon-catching experiences largely stem from a single morning spent fishing the Mackenzie Country Canals with Bryce Helms. Fortunately, thanks to Bryce’s tips and my fortuitous choice of soft-bait, I ended up catching (and mostly releasing) 12 beauties to 7kg by lunchtime! Even Bryce was somewhat impressed, especially as there had been no salmon escapes in recent times. Having said all this, I acknowledge there is a big difference between catching escaped caged salmon and chasing wild ones with ‘normal’ tails in one of Canterbury’s braided rivers! I look forward to more such experiences in the future - no matter where these silvery torpedoes are situated in the South Island! A life devoid of salmon changed to a dozen in just one morning!

Fishing for trout was my greatest passion for many years, and now that my family is getting older, I hope to get away on occasional weekends with ‘the boys’ to do more of this, again.

In this case, though, much of the pleasure is in the fishing experience and process, especially when fly-fishing, with the actual catching coming a close second. There is so much to be gained from simply wandering up small streams and rivers, with new and wonderful vistas opening up while rounding each new corner, the bush all around and native birds singing their hearts out. Or maybe it’s casting out into a cold, clear lake, snowy mountains on the horizon, with fat silvery trout slurping down buggy-type morsels or slashing the surface in pursuit of smelt or damsel nymphs.

For me, just the rhythmic casting of flies can be absorbing and calming (if I’m not snagging grass, shrubs or trees, or whipping flies off on the stones and gravel!). There’s something about fly fishing that other freshwater methods can’t provide.

Several locations were at their peak when I really got into fly-fishing, resulting in plenty of big-fish tussles. For example, Lake Aniwhenua had some deep-bellied monsters in it during the late 1980s and through the ‘90s. If we didn’t get at least one double-figure (pound, that is) trout for the weekend we were disappointed. There were other neat places, too: Lake Okataina, Flaxy Lake, Lake Tarawera, Lake Rerewhakaaitu, Lake Rotoiti and Lake Otamangakau could be amazing at times – and I really enjoyed fishing the incomparable Tongiriro River with wet flies!

Now, of course, there are the Mackenzie Country Canals, which have taken things to a whole new level, occasionally producing trout to over 40lb! Just a little 25-30 pounder will do me though… While the writer has caught trout to around 6.5kg, they pale in comparison to those available in the Mackenzie Country canals.

I went crazy on marlin fishing for a while and still own hundreds of skirted lures to prove it!

Seeing ‘the bite’ was the pinnacle for me, so for many years I could usually be found down at the stern railing, staring out over the lure pattern, constantly fine-tuning the various lures according to the conditions, and waiting for that lit-up beast to come roaring in!

I also found the sight of hooked marlin charging away, one porpoising jump after another, to be absolutely exhilarating – especially when attached to lighter gear. This saw us successfully using line down to 8kg on several occasions; it’s hard to adequately describe the excitement felt as we reversed in high speed after our hightailing quarry, the whole boat shuddering from the strain and torque, with water cascading over the stern to half fill the cockpit at times. I would have loved to have got one on salt-fly too, but my opportunities and finances ran out around that time.

Besides, we were also occasionally tangling with the much bigger blue and black marlin… and suddenly striped marlin didn’t look as impressive, aggressive and crazy anymore. Chasing marlin with 6-8kg tackle provided the writer with some of the most exciting experiences of his life!

In the next part of this series, we count down the remaining top five species on my local species list...

in The Work-Up
1 hour ago
White snake

in Buy Sell Trade or Exchange
4 hours ago
cornf3 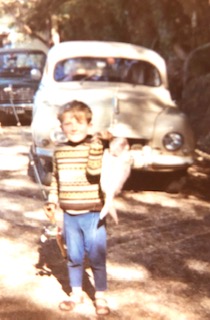 in Buy Sell Trade or Exchange
13 hours ago
Seedo