”Heaps of fishing space and a stable platform, not to mention good performance in the rough”, were the features new Kingfisher 670 Powercat owner Bill said influenced in his recent purchase. Speaking with NZ Fishing News’ Grant Dixon during a Bream Bay boat test, Bill Armitt was full of praise for the vessel, SupaReel - which he has customised to suit his needs

Bill describes himself as a ‘bottom fisher with game fishing aspirations and the boat reflects that. The cockpit is large – especially with the drop-down clears out of the way – and there is excellent toe-room; that space needed when playing a fish with the angler’s thighs pushed against the gunwale.

Up front there is a casting platform, excellent for those who enjoy chasing kingfish with lures, accessed by a reasonably a wide gunwale with handholds on the cabin top. You couldn’t describe it as a ‘walkaround,’ but there is a reasonable amount of space when going forward to and from the cockpit.

If you were seriously into your topwater fishing, raising the forward bow rails would be worth considering for greater angler security.

The caged space between the twin Honda 100 outboards is a great spot to fish from – with a free foot wash thrown in – and would be a handy spot from which to trace a gamefish. The back of the cage folds down to create a dive ladder with a drop-in door keeping the water on the right side of the cockpit in sloppy conditions.

SupaReel’s transom features a decent livebait tank set into the step-through to the rear platform which would comfortably hold 50 or so jack mackerel baits or 4-5 decent-sized kahawai. Staying with the livebait theme, shifting from bottom fishing to gamefishing mode, the baitboard/drawers combination is easily removed from the port to starboard side of the transom, to access two tuna tubes. A saltwater sink sits on the starboard side – great for washing hands after handling fish or bait.

Bill plans to use drop-in ‘riggers when trolling lures which is a good option as game fishing is not the boat’s prime fishing function. The end rod holders in the rocket launcher have been beefed up for this purpose.

I liked the two deep pockets that run the length of the gunwales – perfect for holding decent gaffs and all the other paraphernalia fishing folk like to stash on board their boats. A washdown hose is included to help keep the working spaces clean. Water exits the vessel via scuppers, rather than being pumped out. Personally, I would like the additional pump option when needing to remove decent amounts of water from the cockpit in a hurry.

There are two start batteries and one house battery, all set in raised transom lockers. The start batteries are C-Tek monitored and set up for easy charging access. Another feature of the vessel is the use of U-Dek flooring throughout, providing a non-skid, cool, shock absorbing covering underfoot that is easily cleaned.

Bill has plans to do the occasional overnighting trip. While the cuddy is short, the bulkhead folds out to create the extra leg length. A chemical toilet is located under the passenger’s seat, along with two sets of shallow tackle drawers. Protection from the elements is provided by dropdown curtains that provide a full-enclosed wheelhouse. Currently, this curtain is one-piece. Bill is keen to create side clears with the back panel unzipping, giving him options to remove it altogether, or roll it up.

Removed, it greatly increases the cockpit working space, giving Bill the best of both worlds. Adding to the space-saving functionality of the cockpit are the fold down passenger seats located behind the helm and passenger seats. These double as step-ups for getting on and off the boat and accessing the casting platform. SupaReel is well-illuminated with Hella lighting throughout. The cockpit lights operate through the programmable C-Zone switching system which gives him red and blue options. Underwater lights are fitted to the transom. Apart from adding to the vessel’s appeal after dark, they have the practical function of attracting baitfish. To help with docking, there is a forward-facing light bar located on the cabin top.

While Bill has carefully considered his options regarding practicality versus cost, there has been no skimping in the electronics department.

SupaReel carries a full suite of Raymarine electronics. The 16” screen dominates the helm station offering radar, chart plotting, sonar, auto-pilot and engine management options. The VHF is a Vesper cordless model – think mobile phone size – and has all the functionality of a standard VHF. Bill opted for it as he wanted a tidy helm station that didn’t include chords hanging down. There are three USB charging points for cameras, iPads, and cell phones, along with a 12-volt outlet socket.

Crew comfort has not been forgotten. The helm seat sits on a SoftRider pedestal and both this and the passenger seat are upholstered with bolsters. There are well-placed handholds for any crew who wish to travel standing up. While Bill opted not to fit sliding windows, two forward facing hatches in the cabin top act as scoops to create airflow down onto the helmsman and the passenger. Two further hatches in the cuddy provide airflow when at anchor, great when overnighting. All-round vision from the helm station is excellent through the green-tinted screens and side windows, both seated and standing.

The helm station features controls for the LoneStar drum winch, and the switching system is C-Zone, which has the advantage of being able to programme various functions such as lighting and livebait tank. The latter can set up for intermittent use, say run for two minutes every 10 – saving the battery and great when overnighting when you want to keep baits alive. The switching panels are located both at the helm station and on the inside rear of the hardtop where second panel can easily be reached from the cockpit. The rear switching includes underwater lights, cockpit lights and the washdown and livebait tank.

Rather than painted, the hull and cabin has been vinyl wrapped and where it has not been vinyled, Nyalic has been applied to give a nice finish and protect the alloy beneath. Combined, it has added to the vessel’s sharp appearance.

Completing the rig is an Auto Leisure and Marine Group built Enduro customised tandem braked trailer, which Bill says, ‘tows brilliantly.’ What he likes is the internal flushing system where he simply plugs in the garden hose to a connection on the trailer and can wash out the frame internally, adding to its longevity.

No setting up for Sportfishing boat trial is ever complete without spending some time fishing!

Sam Pillage from Spec Media and I met Bill Armitt at Marsden Cove and after a few pleasantries it was time to hit the water. Bill came ‘fully loaded’ for whatever fishing opportunities might present themselves, the first coming less than 100 metres outside the Marsden Cove Marina.

There was a swirl on the water, created by a small kingfish shadowing a stingray in less than a metre’s depth. Out with the topwater set and Sam got a couple of casts in but didn’t hook up.

We continued out wide of the harbour and beyond Four Mile Reef to where the longliners were working in 40 metres. Conditions did not trouble the SupaReel– a half metre easterly swell topped off by 10 knots of SW breeze. The vessel loped along, taking the conditions in its stride.

There is something about the hum of two well-synchronised motors and the twin Hondas were no different. At around 3800RPM were we doing 23 knots, burning a bit less than 34 litres (17 litres a side). Given that we were carrying a full 300-litre (2 x 150 tanks) fuel load, plus three crew, this gave us plenty of range. We stopped on a bit of sign and over the space of a mile or two of drift, we put a good feed of Bream Bay pannies in the 100-litre Catch! bin that Bill carried.

With the drogue out we were held stern on into what slop there was – providing a steady fishing platform. It was only when the drogue came in and we went side-on to the waves that there was any movement at all.

Running the boat, I liked the way the hull popped out of the water with minimum revs, quickly onto cruising plane. There is no doubt catamarans run differently than monohulls – especially when tight cornering where they sit flat through a turn, as opposed to the heeling motion of the monohull. I describe it as ‘turning like it is on rails.’

Bill had considered more horsepower, but the twin 100 Hondas certainly get the job done efficiently.

The Kingfisher was Bill’s first experience with the catamaran configuration and he is now hooked on them.

“It is everything I thought a catamaran would be – a good sea boat, roomy and a great fishing platform.”

The last word goes to Sam, whose eagle eyes spotted, in the same place as the morning, one or two larger kingfish chasing a stingray. Out came the topwater rod and onto the forward platform – first cast and he was hooked up but on coming tight, the braid parted where it dug into loose line on the spool – ‘bugger’ was all he could say! in Forum comments and feedback
30 minutes ago

Also links like  bold and edit etc... think has something to do with the servers the adds are linked to???...

in The Boat Shed
32 minutes ago

Its the winbch drum I have found gets the most corrosion damage.I layer up lanocoate , leave few days then load wind the riope back on...

in The Briny Bar
45 minutes ago

Steps to get the circles out quickly if releasing or keeping a fish push hard on the back of the hook eye with one of your... 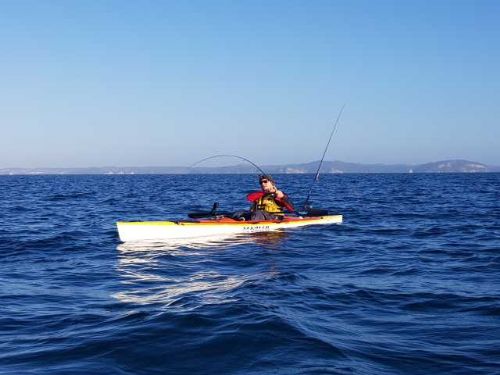 One more bump before i buy from offshore...

I have. It may have been the vid thing, but it took them ages (months) to get some parts in before shipping. It was right at...