ITM Hook me up! The new fishing show format

The ITM Fishing Show was all about fish, fishing and all things related to fishing, and it was going along nicely at 300 episodes when we decided to create ITM Hook Me Up! In doing so, we broke the mould for making a fishing show.

No more could we just go and catch the fish we wanted, film the action and craft it into a fishing show to inform and entertain Kiwi’s and millions of others around the world. In the ITM Hook Me Up! format, we now work with a guest who not only has to catch the fish of their dreams, but communicate it in their own words. I won’t lie – it’s certainly been challenging at times. But overall, I have found it incredibly rewarding. And I put that down to the people we’ve filmed with, all of which have two things in common: they’re all kiwis and they all love fishing.

Our guests have had many laughs and tears, both on and off camera, and even after days where we’ve caught five swordfish or 28 marlin, it’s the moments shared with the guests I remember most fondly from this series. I’ve got too many anecdotes to share here; however, I’ll make room for one little story from series one.

The guest was Ryan Fox, son of former All Black Grant Fox and New Zealand’s top golfer, but that’s not why he was fishing with us. He was there because he is a mad-keen fisherman with a dream. Like all our guests, I wanted to take him out of his comfort zone, get him some good fish and show him a good time. Now I don’t play or watch golf, and when I think of golfers I see wealthy dudes in polo shirts and bad pants drinking gin at the clubhouse. So, I made a plan for Ryan that would undoubtedly give him a new experience. We stayed at Waitiki Landing in the Far North and fished from a dinghy and off the rocks with the locals – and, like me, none of the locals were golfers. He was a looooooong way from the golf club.

On the last day, we were privileged to get to fish a beautiful remote piece of the Far North coast that we accessed via Maori land. As we bounced our way along some narrow tracks in the Hilux, I couldn’t help but notice Ryan’s grin. I didn’t have to ask how he felt – I could see he was chuffed just to be there. The location was special, but the real treat was to be hosted by these locals. All the cuzzies had come out just to show us a good time. We were experiencing mana aki manuhiri tanga. Even while digging the truck out of the dunes, Ryan was still grinning, but this is where the story gets interesting. As we scouted ahead in the quad bike to find a track through the soft sand on the beach, the bike sunk in a bog filled with kelp that had washed up in a storm. To get the bike out, we had to get in the bog ourselves.

As we stepped in, we sunk through the crust of kelp and vile black water bubbled up around us. We were literally up to our nuts in filth. “You’re a loooooong way from the golf club now mate!” The smell was putrid and maggots crawled all over us, yet Ryan kept that doey grin – the guy in the filth next to me was not how I pictured a golfer.

After we got the quad out, I did some forensic analysis and figured out the reason for the vile bog. It appeared that kelp had washed up and blocked a stream to create the bog, but the smell was due to the kelp being filled with hundreds of baby packhorse crayfish. They must have been marching before getting washed up in the storm, and now they had rotted in the freshwater. Our host, Scotty Murray, fished right on the edge of the beach where the maggots and rotten cray would have been washing into the sea and he nailed a nice snapper – I’m not sure whether this was intuition from the old matua, or whether he just couldn’t be buggered walking all the way out to the point with us. We caught snapper up to 10kg, but the enduring memory is the people we shared the day with. One of them, Mabel Murray, stood out as being incredibly passionate about fishing. So, in turn, we took the girl raised in Whangape to the South Island as a guest on series one of ITM Hook Me Up!, and yep, we pushed her out of her comfort zone too. 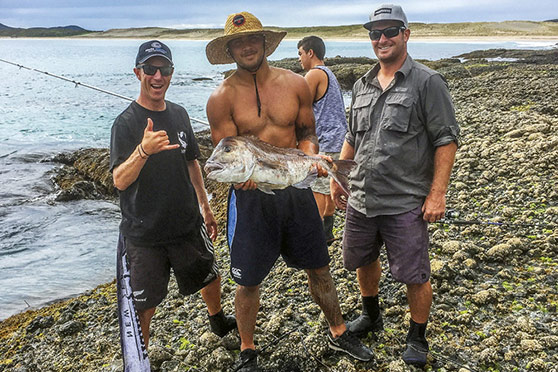 Kiwis are great people, and Kiwis that fish have something in common that makes us all the same, irrespective of wealth, race or where we live. So I’d like to say thanks to all of our guests over the last two years. Some have been stricken with serious illness and others have lost loved ones, yet, in the act of catching a fish, I’ve had the privilege of seeing every single one of them experiencing a moment of pure joy and happiness. To me, that’s better than any fish.

We are still releasing new content weekly of all kinds of fishing, from all over New Zealand. Get it all free at ultimatefishing.tv or download the Ultimate Fishing app. 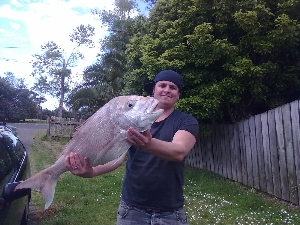