Dawn vs Dusk: What's the best time to Fish?

It’s commonly accepted knowledge that the change of light period is the best time to catch many fish species in New Zealand. Nick Jones digs into why this is the case in an attempt to shed some light on the real quiz – whether a winner can be crowned between dawn vs dusk?

Change of light is my favourite time of the day to drop a line, and it is widely regarded that fish feed hard as the sun is rising or going down. Sunrises and sunsets mean the ‘changing of the guard’ in terms of species and consequently offer the first or final chance for species to feed for the day or night; akin to humans eating dinner or breakfast. Many fish species do not sleep but do have a ‘rest’ mode and/or retreat to areas where they can be safer or less active. Squid are a common food item for many species and become far more active in the upper water-column in the darker hours. It’s no surprise therefore that big tuna are commonly caught when trolling at sunrise, sunset or even overnight around the world.

In my experience, especially when the water’s warmer, fish are more active during sunsets and sunrises. The fish we are targeting are generally not at the top of the food chain. Therefore, they must constantly be aware of predators and the change of light probably helps conceal their movements. Similarly, our target species may find it easier to ambush the bait which feed harder in these periods.

Fish like snapper can be notoriously tricky to tempt during the middle of the day – the fish are there but can be super hard to catch. I’m not sure whether this is related to spawning activity (the fish which were feeding hard to put on condition during spring may have become more focussed on doing the deed!), the water being too warm to sustain extended feeding activity, or the longer days spreading the feeding opportunities out over a longer period. Perhaps it is simply the fact that our boats, terminal tackle and leaders become more obvious in the full light of day.

I find early morning and evening the best time to catch livebaits, be it from a wharf, boat or from the rocks. Predatory fish like kingies tend to use the shallow-light angles to their advantage, busting up those hapless baitfish in the morning and evening.

The other simple benefit of hitting the water early or staying out late is that you get a better chance of having spot X all to yourself.

One definite exception to the ‘rule’ of change of light fishing is work-ups in the Hauraki Gulf. There is often little point heading out of port in the dark as our ‘old mate’ Gary Gannet tends to take a while to find the bait in the morning. 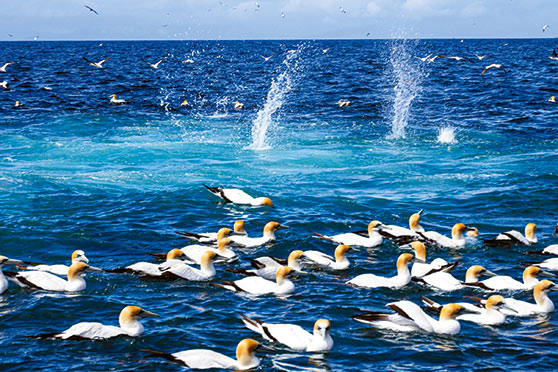 Work-ups are an exception to the general dawn or dusk bite.

One of the best things about dawn is that it’s generally the calmest period of the day – making travelling and fishing more comfortable than in the late afternoon. Heading out in summer for an evening session can see you dealing with those nasty afternoon sea breezes – not much fun.

The morning calm allows you to read the water, work lures more effectively and observe opportunities as they present themselves. With the calm of the morning also comes better underwater visibility, which assists lure anglers – at least before the wind picks up and stirs up sediments. The other day I snuck out for a topwater nudge with fellow Hauraki Express skipper George Bourke at sparrow’s fart and we found ourselves surrounded by terns working a massive area around Rakino Island. It was so calm we just cruised around until we spotted the packs of kings busting up anchovies, then blasted over and threw stickbaits right in among the melee. The action was instant – how good?! 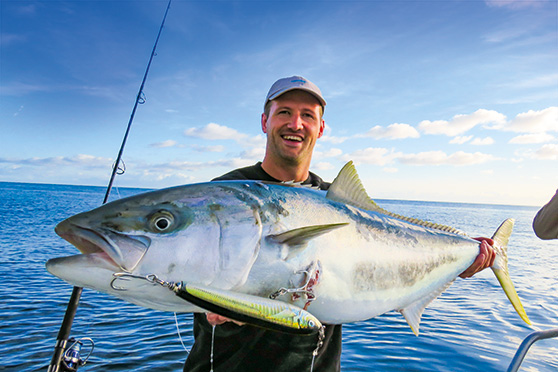 At popular fishing reefs in areas such as the Hauraki Gulf, I believe fish like kingies become a tad ‘gun-shy’ once they’ve seen dozens of stickbaits and jigs thrown their way. This is why being the first boat at a spot can be a huge advantage to getting those fish to bite.

I noted above that predatory fish like kingfish tend to utilise shallow-light angles to hunt down prey. The theory goes that predators generally attack with the sun behind them as their prey is temporarily blinded by looking into the sun, allowing the predators to grab an easy snack. If the bait hangs in the shallows and the predators attack from deeper water at your local spot, then it might be worth thinking about sun angles during sunrise and sunset. On the east coast, this theory suits many spots in the morning with the sun rising in the east. However, if this theory is right then the opposite would be true for much of the west coast where sunset would be preferred for ambush attacks. I’m not even close to finding statistically significant data on such theories, so who knows!

From a practical point of view, conducting an evening trip involves less admin. You don’t need to set the alarm or have your gear prepared the night before. It also allows you to do some reconnaissance if you’re fishing an unfamiliar area, giving you time to find where the fish are holding and the best technique to catch them.

There is a school of thought that during the cooler months, because fishes’ metabolisms are slow, they are more active in the evening when the water has had a chance to warm up during the daylight hours. I don’t totally buy into this theory, however. Some of the hungriest and best conditioned kingfish and snapper I’ve seen have been caught in winter and I believe that feeding hard to maintain a decent layer of body fat is important for fish during the colder months.

And how could we leave the moon out of this argument? Many fisherfolk can relate to finding the fishing terrible for one or two days right on the full moon – one of life’s biggest mysteries in my opinion. One theory postulated is that the full moon glow encourages nocturnal feeding leading to less activity during the day. With more feeding taking place at night around the full moon, it makes sense to target the evening periods as the fish are gearing up for night feeding and would’ve had their fill by the time the sun is rising.

A recent trip to the Cavalli Islands changed my perspective on the dawn vs dusk dilemma. We had hammered a very likely looking spot with stickbaits in the early morning for no result, then came back to the same zone after a full day’s gamefishing. First cast and boom! My friend was on and then he was abruptly off, getting dusted in the shallow 12m depth and losing an extremely rare handcrafted Japanese lure. Next cast, I found myself attached to a more modest kingfish which ended up gracing the deck. I looked up to the sky as we were enjoying a few nightcaps at anchor that evening – it was a full moon! 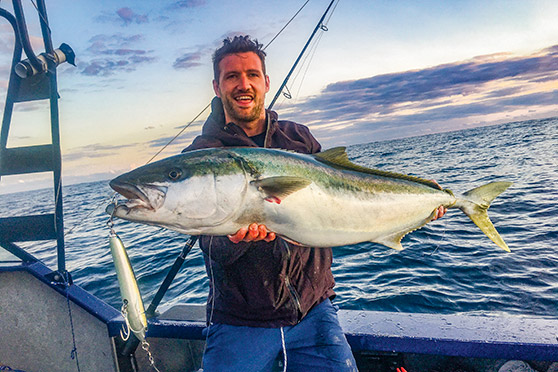 The Cavalli Islands offered an evening bite on this trip.

So, I haven’t really helped as my token research effort has failed to uncover a clear victor – the jury is still out on whether dawn or dusk is better for our favourite NZ fish species. What is clear, however, is that dawn or dusk is generally preferred over brighter parts of the day. But my advice would be to simply get out there when you can – dawn, dusk or in the middle of the day. After all, trophy fish are caught at all times of the day and this just adds to the mystery and intrigue associated with saltwater fishing that keeps us coming back for more. Go well out there early birds, evening grubs, or midday warriors and remember, there is no such thing as a bad time to go fishing! 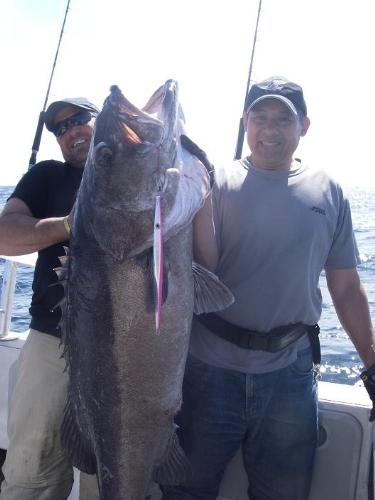