To Alistair Arkell, john dory is a splendid fish for eating and photographing thanks to their fine white flesh and unusual features. Alistair explains all you need to know about catching john dory.

While some people might not share my views, even going so far as to describe john dory (JD) as ‘ugly’, I find them spectacular visually, and their telescopic mouth makes them one of the more unique fish we are likely to encounter. They’re an absolute delight to eat – one could mount a strong argument that they are the best eating fish available to us, given the succulent, delicate, bloodless meat.

JD are also extremely easy to fillet and when skinned, the fillets fall into three clearly defined pieces. Even a medium-size specimen will give you approximately six nice fillets that are more than enough for two people’s evening meal. Some people like to leave the scale-less skin on to add to the flavour. Just make several slices in each piece to prevent it curling up when put in the pan.

Most of us have caught a JD or two in our time on the water, but it’s rare to encounter anglers who target them regularly. They usually come onboard as by-catch, and with a JD on the line, often the chat goes something like, ‘I don’t know what I’ve got’ to screams of ‘get the net, get the net!’ when colour starts to appear. Their soft mouths have provided anglers with many an anti-climax as they attempt to pull the fish over the side of the boat, instead of gently netting the catch. 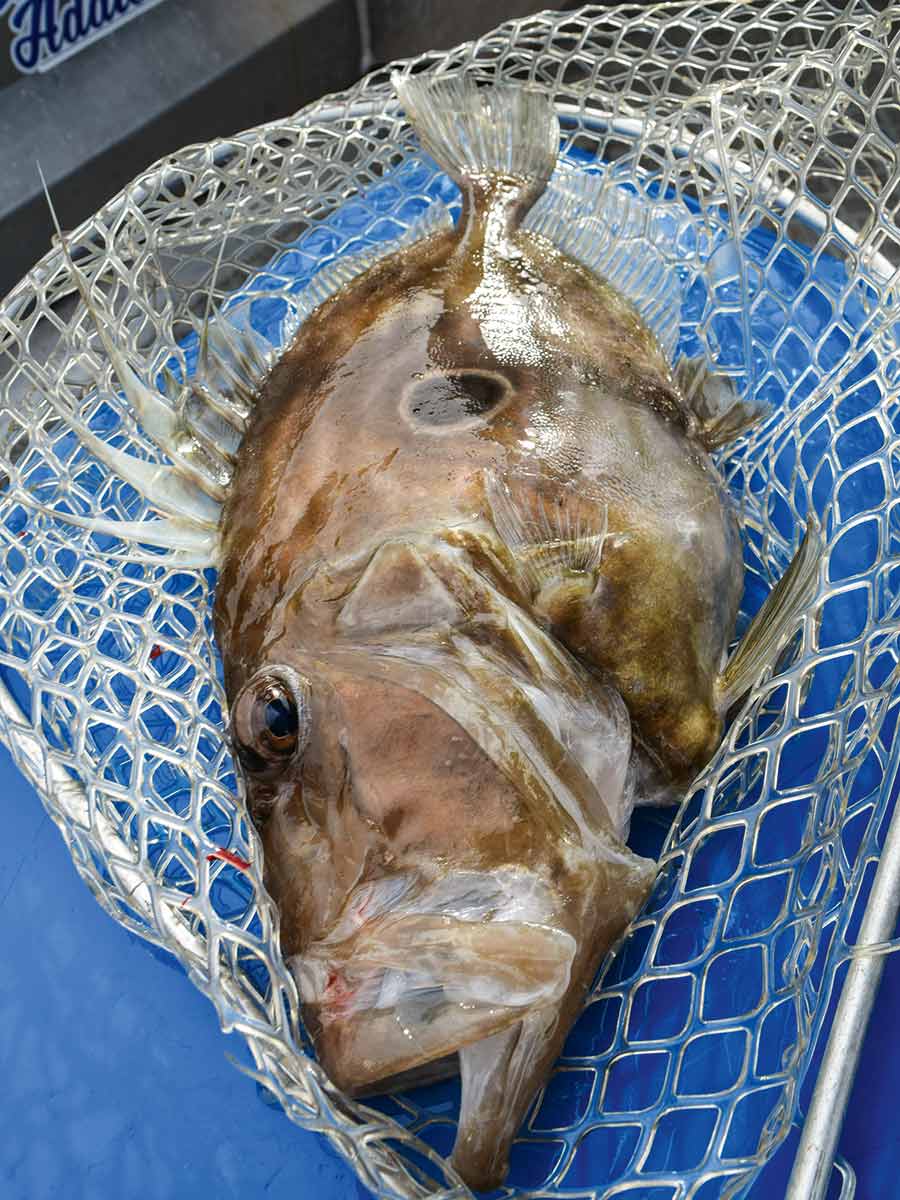 JD's have soft mouths, so using a net to land them is recommended.

The main predators of JD seem to be spearfishermen and the commercial trawlers that scoop them up over the vast expanses of sand and mud that dominate the 30-60 metre zones. JD are a regular around wharves, weed lines, reefs and sandy expanses. They occur in lots of different terrains, and the only prerequisites are small baitfish and clean water. I’ve heard credible rumours that commercial wharfs such as Mt Maunganui are teeming with john dory, with zero predation from humans to interfere with their lazy lifestyle.

Two of the most well-known and documented JD ‘hot spots’ are the Far North wharves at Mangonui and Houhora where they are targeted by casting out and slow retrieving soft-baits along the bottom. Using a livebait is a sure way to stir up some action off the pier and summertime is seemingly the best period to catch them off the wharf. I’ve witnessed Houhora locals catch them one after the other on soft-baits and livebaits, and at other times nothing at all is caught. But like they say, that’s fishing, and you should have been here last week!

At times, we have caught JDs on big baits meant for snapper and kingfish, as well as on soft-baits and slow jigs – generally anything with a bit of movement.

A prime example of this was shared with me by legendary Far North angler and guide Rob Parker, who let me in on one of his little secrets many moons ago. On a long and slow day’s snapper fishing out of Houhora while anchored on a weed line with berley deployed, Rob lowered a sliding lure to the bottom and ever so slowly retrieved it up 10 metres, dropping it back down and repeating the process. Initially, my expectations of success were low, but Rob, being the saltiest fisherman I know, went on to put a couple of JDs on the deck before long. While it is boring fishing at the best of times, if you are waiting for the snapper bite, why not put a couple of those tasty morsels in the slurry? Better yet, if you’re fishing through the turn of the tide, impress your mates with your fishing prowess, and when you have a JD flapping on the deck, you can thank Rob Parker. This trick impressed me then, and it still impresses me today.

Outside of normal bycatch, using soft-baits off a wharf, or using Rob’s method above, the best way to target a JD is with livebaits. A small to medium size jack mackerel is perfect. I like the medium size jacks as a big JD still has no issue scoffing one down. And often when targeting a JD this way, a decent-sized snapper of kingfish is a welcomed ‘by-catch’. 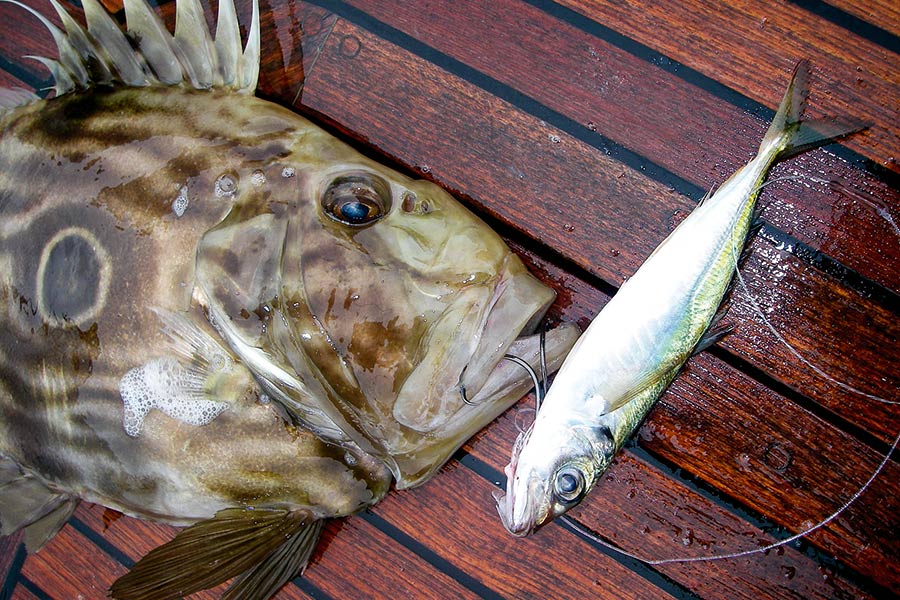 Deploying livebaits is one of the most consistent methods of targeting john dory.

At the sharp end of the deal, I keep it very simple and use the same rig as I do for kingfish. An offset recurve hook is attached to a two-metre minimum 50lb fluorocarbon leader and then the appropriate ball sinker – just enough weight to get to the bottom and hold in the current. In most situations a two-ounce sinker is fine – you don’t want the sinker to be an anchor.

Another popular JD rig is an adaptation of the dropper rig, which uses a three-way swivel tied 50mm above a teardrop style sinker. A short leader (approximately 20cm) is tied to the swivel and the recurve hook is attached at the other end. The mainline is then connected to the top of the swivel. This allows the livebait to swim around, minimising the chances of it tangling up. These can be purchased already pre-tied from your local tackle store.

Tackle wise, I like a minimum of 15kg mono or 30lb braid, but as there is no fight with a JD, often I’ll just use my normal kingfish livebait set. Go heavy, because if you do hook a big fish, you want to be able to land it. The worst thing that can happen is being taken into the bricks, as the fish will get tangled in the reef and become shark bait.

Where to find them?

A weed line is the classic place to find them or where the reef drops to sand, as often this is where JD sit and hunt their dinner ambush style. This could be a depth of anywhere between 5-30 metres of water. In typical New Zealand coastal fashion, a lot of weed lines are in that 10-20 metre zone, and this seems an ideal depth. However, any reef structure dropping to sand should have JD’s present. Another classic scenario is where large concentrations of baitfish exist. Places like the Bay of Islands, Bream Bay or Whangaparaoa Bay on the sand or around reef structure would be absolute hot spots to find john dory. Anchor and get some berley flowing back down some current, and a set livebait will turn up JDs, snapper and kingfish. All you need to do is get off the couch and go and do it! 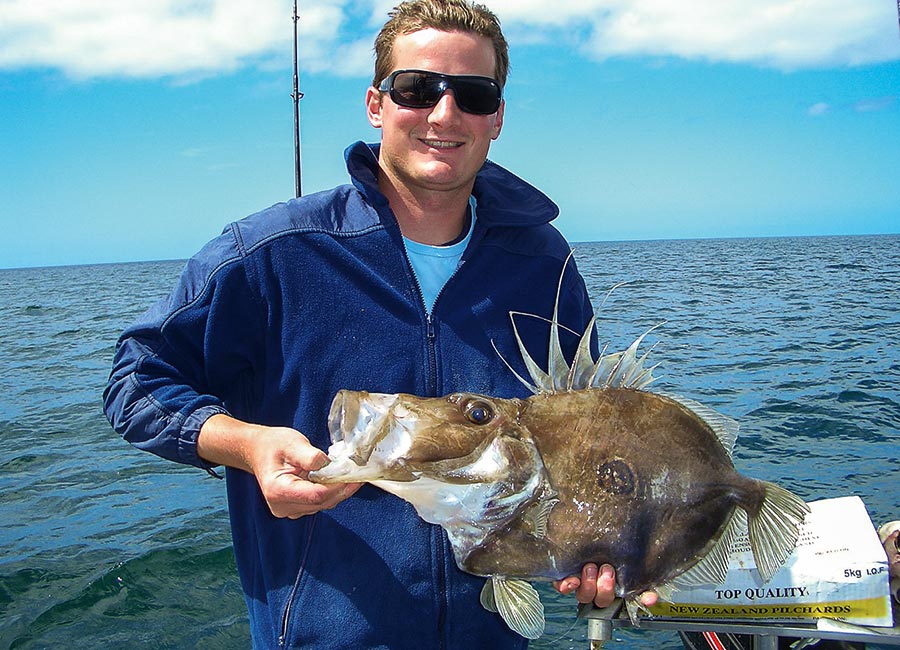 John Dory are ambush hunters, extending their jaws to inhale any baitfish unfortunate enough to come into range.

My Hauraki Gulf home patch is teeming with JD’s and the fact that commercial trawling is not allowed in the inner gulf has contributed to a strong population growth. Often, the fish are large specimens, destined to die of old age if you don’t go out there and give it a go! And there is no shortage of livebaits. When deploying berley, it won’t take long to attract the baitfish which can be caught on a sabiki. Re-deployed on the bottom, they will give you your best chance of adding these tasty table fish to your ice bin.

My most memorable JD capture happened during the lockdown while surfcasting off Hatfields Beach at night. Some splashing at the water’s edge, which I wrongly assumed to be kahawai chasing baitfish, turned out to be a JD that got flipped on its side by the shallow water and pushed onto shore be the gentlest of waves right at my feet. I couldn’t believe my luck! And given it was the only fish of the night, I went home a very happy angler! 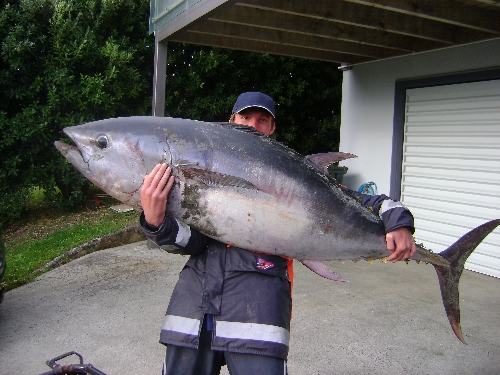