A history of snapper on lures - Part 2: Inchiku, madai and tai-rubber jigs

Ethan Neville investigates some of the players in the latest generation of lead and rubber snapper lures.

While you may not all have a Josh on board, there will be a lot of readers who recognise this dialogue. In under 20 years, New Zealand fishers have gone from agonising about whether to use pilchards or squid, to discussing which artificial lure will attract the biggest bite. The last decade in particular has seen the modern angler’s tool-kit of metal and plastic lures proliferate, each of them best suited to a different situation. Previously, I told the story of how soft-baits revolutionised the attitude of recreational anglers in New Zealand. In this article, I tell the story of a second revolution: the introduction of inchikus, madais, and tai rubbers (sliders/kaburas). While soft-baiting changed attitudes, these jigs provided anglers with a whole range of new opportunities, and, importantly, brought New Zealand to the forefront of lure design. 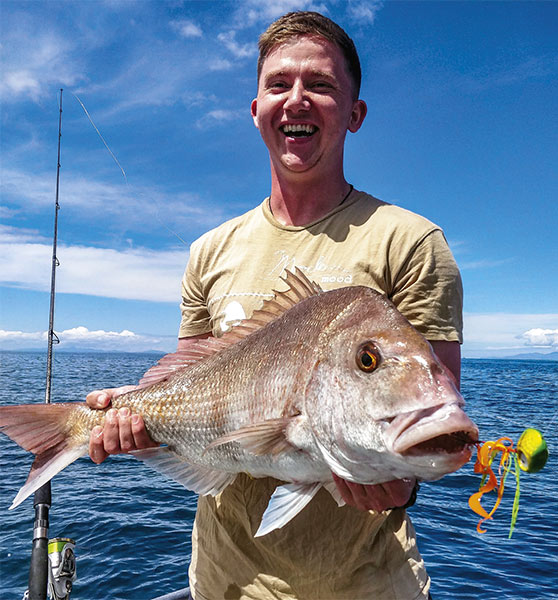 The reliably informed John Donald, director of New Zealand fishing brand ‘Catch’, tells a story of how skirts (as used in inchiku and madai jigs) were first invented. It begins with what I’m sure is a familiar circumstance for most: forgetting the bait. Some time ago (like all good stories, the dates are fuzzy), a Japanese charter captain was out on the water and in need of fish; the problem was he had nothing to catch them with. What he did have was seaweed. Without time to return home to pick up the forgotten bait, he cut the seaweed into strips and tied them to his hook, letting them dangle below the sinker. Tired, desperate, and without hope, he dropped this ludicrous setup to the bottom– snapper don’t eat seaweed, so ‘ludicrous’ is not an exaggeration.

In fact, he hooked up for the rest of the day consistently. The hanging seaweed was mistaken as octopus and/or squid tentacles, and the slow movement of the rig in the water ensured the gullible snapper believed it was no more than an easy feed. Snapper, as it turns out, do not make use of all their senses when hungry, being more than happy to bite something that only looks like food. I will leave you to decide the veracity of this tale for yourselves; what is important is that, regardless of their origins, using jigs that incorporate skirts has been one of the most popular methods for targeting snapper (as well as a number of other fresh and saltwater species) in Japan for the last twenty or so years – the seaweed, of course, now replaced with rubber.

Japanese innovation in this period has been second to none. One of the key contributing factors to this successful innovation, however, is deeply troubling.

We often forget how lucky we recreational fishers are in New Zealand. While there is no doubt still room to question regulation surrounding the commercial fishery, our ability to consistently catch eating fish with kayaks and trailer boats in our own proverbial backyard is almost unique in the world. In comparison to Japan, our snapper fishing appears like Eldorado. Between 1984 and 2000, Japan’s annual saltwater catch nearly halved. While a portion of this sharp decrease can be put down to more restrictive international regulations, in this period the harvest has decreased in off-shore and coastal fishing by 63% and 16%, respectively. Catching wild fish in Japan, in other words, is not as easy as it once was. This extreme pressure on fishers forced the industry to innovate.

First out of this pressure-cooker came inchiku jigs. Their elongated metal bodies, middle-mounted assist hooks and free-swinging, rubber “octopus” skirts complete with a fake eye at the stem, make them both durable and irresistible to snapper.

Madai-style jigs came next. Like inchikus, they have octopus skirts and (typically) two assist hooks attached by cord. Unlike inchikus, they have a circular lead head that sits above the skirt, giving them the appearance of a squid or octopus. Madai is the Japanese name for their snapper which, although technically a red sea bream, is so similar to New Zealand snapper that some consider them as a single species. In short, what catches madai also catches snapper, and these lures are called madai jigs for good reason.

The most recent Japanese invention is tai-rubber jigs. In New Zealand, these are popularly known as Sliders, which is Ocean Angler’s name for their range of tai-rubbers, or Kaburas, Catch’s term for these jigs. They are often grouped together with madai jigs, but their sliding head (which takes the weight off the hook when attacked, increasing hook-up rate) prevents them from being included in this category. In fact, there is no one word that can successfully group these three styles of jigs together. They are often referred to collectively as slow-jigs, but inchikus are often retrieved quickly and do not comfortably sit under this term. What does unite them is their ability to catch snapper, and news of this did not take long to reach New Zealand.

Borrowing from the best

Jigging for snapper with metal lures has been taking place in New Zealand since the 1980s. I am reliably informed that many older than myself will remember fishing with NZ-made Lethals, Branks, and Grim Reapers – derived from the original Norwegian Stingslidas (lure manufacturers were apparently more creative with their names thirty years ago), and not without success. Bait fishing, however, could not be displaced so easily. As I explained in last month’s article, the introduction of light braid lines and lighter gear, in combination with an attitude-change from recreational fishers, was required before lure fishing could be embraced by the masses. Soft-baiting accomplished this, and the scene was set for more artificial lures to enter the market. It only took five years or so for Kiwis to catch on.

Thompson Walker Ltd was first on the scene in the late 2000’s, introducing the Prowler range of inchiku jigs. Daiwa soon put Bay Rubbers (madai) and Pirate jigs (inchiku) on the shelves, and, at a similar time, Shimano introduced their still popular Lucanus (madai) and Bottom Ship (inchiku) ranges. Jigs started selling, but, like with soft-baits, there was still a teething phase that took place in which New Zealand anglers worked out how to use them. Some still fished the jigs on heavy gear; others persisted with anchoring and dropping the lures into a berley trail. While these methods limited initial success rates, the jigs are so effective that people still caught fish – including mates of mine who still resist taking my advice about lifting their anchor but somehow don’t come away empty handed. 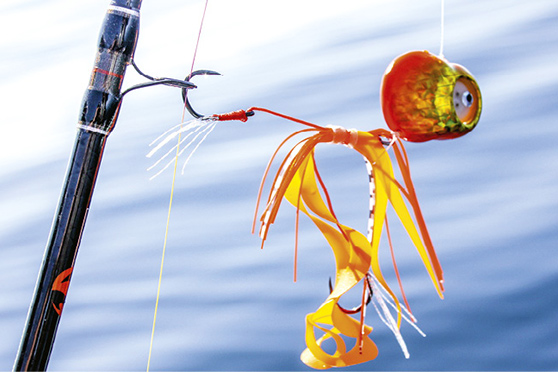 Glowbite lures are a Kiwi-designed and feature an embedded LED light.

It wasn’t until Paul Senior started importing and promoting inchikus through Ocean Angler that this method of fishing really took off in New Zealand. Jitterbugs (inchikus) were the first range of these lures that I tried, and my immediate success ensured I never went back. Sliders came next for Paul’s company Ocean Angler, and their popularity started the craze for tai-rubber lures in New Zealand that is yet to slow down. They simply caught fish, and minimal technique is required to use them (“hit the bottom and slowly wind-up, even if fish bite!” is what I tell new anglers on board our boat). Best of all, one lure, unless stolen by a big fish, could be used all day. With most tai-rubbers costing around $20 a piece, this is probably the most-cost-effective method of in-shore fishing (the same is true of inchiku and madai jigs). Over the last decade, as most fishers will confirm, there has been no more popular way to catch snapper than with inchikus, madais, and tai-rubbers. 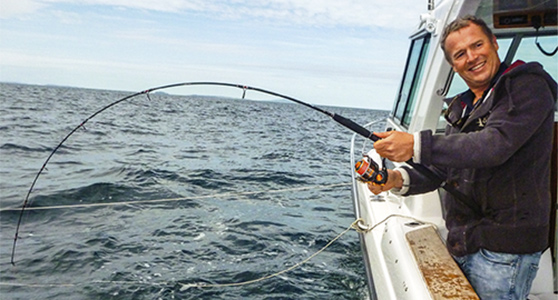 Paul Senior has been heavily involved in the development of lures for the New Zealand fishery.

New Zealand at the forefront

Paul Senior, in his 2011 article on the “how-tos” of inchiku jigs (perhaps the first article of its type), joked that the Japanese were so far ahead of New Zealand in terms of jig innovation and technology “that it’s not funny.”

Today, we have several companies designing jigs that not only match the quality of Japanese lures but are finding ways to improve them. Ocean Angler, Catch, Glowbite, as well as Shimano, Daiwa NZ and more recently Black Magic, are just some of the brands at the cutting edge of lure innovation. We are now producing jigs that are stronger and more durable than Japanese designs, capable of consistently landing snapper, while also coping with opportunist kingfish caught on the drop. 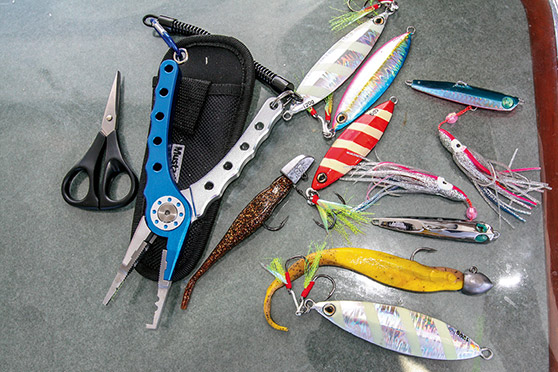 Beyond durability, Glowbite has introduced the first tai-rubber lure with an embedded LED light, which, according to their tests, promises to catch three times more fish. Ocean Angler has already used tungsten, a metal stronger and denser than lead, in their micro-jigs, and will soon be using the same material for their Slider range. Black Magic has even introduced snapper rigs with inchiku/madai-style skirts that can be used with or without bait.

New Zealand is on the cutting edge of jig design, and the innovation is not going to stop. Whether it be introducing eco-packaging (Ocean Angler), or, like Catch, designing new lures altogether (Squid Wings), the New Zealand fisherman’s snapper tool-box is only going to keep growing. In under 20 years we have moved from bait to soft-baits to inchikus to mechanical jigs, micro-jigs and even sinking stick-baits. You, like me, should be excited about – and ready to embrace – whatever is coming next. 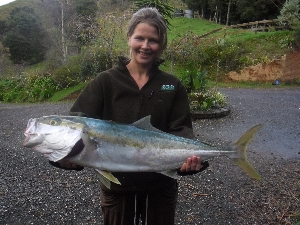