With decades of experience fishing and diving from kayaks, Rob Fort is on a mission to share his hard-earned knowledge. In his last article, he provided some sound advice on selecting the right kayak, and in particular, what makes a kayak reliable and safe. In part two of this series, he continues where he left off, outlining more kayak options, as well as everything you need to know about anchors.

Choosing the right kayak for the job couldn’t be more important. In modern kayak fishing, there are more options than ever, and even the method of propulsion is now up for debate. Traditionally, of course, it’s been the paddle that moves the kayak along. Nowadays, pedal power and even electric motors are both viable choices. Being a bit of a purist, the non-human powered option just doesn’t seem right for the kayak and takes away the sense of achievement from paddling or peddling. The electric motor also takes away the physical benefits a non-powered kayak offers. During many years of encouraging others into this style of fishing, it’s been rewarding to see people become more physically fit through kayaking, losing weight in some cases.

Paddling is where my kayak fishing began and with the right accessories, the paddle kayak has allowed me to have plenty of great experiences and catch a trophy fish. However, using a paddle does have its disadvantages, such as the need for an anchor to slow the drift speed down. You are also left at the mercy of the fish on the line, which can see you towed into the foul ground if it’s a big one. The opposite is the case with the pedal-powered kayak. If the drive allows you to forward and reverse pedal then it’s possible to control the kayak as it drifts along while fishing. It also means you can chase a fish down after a big run as well as reverse away from hazards like wash zones and foul ground.

The other major difference between paddle and pedal-power is cost, which is higher with the pedal system. If you can afford to make the transition to pedal, it is well worth it. One of the primary advantages is the choice of two drive systems. The first is a set of fins that move from side to side like a fish does when swimming. These are very efficient and the fins can be folded up underneath the kayak. They do provide the option to reverse but the drive may not necessarily be direct meaning you will need to stop pedalling to engage into gear. The other type provides direct forward and reverse gears by utilising a propeller to drive the kayak. In this second type of drive system the propeller is tucked away above the hull. With both drive options, the user must lift them so they don’t get damaged in shallow water. The type using fins folded under the kayak is better suited to surf launching although in the right conditions both work equally well and the choice you make will be a personal one.

In the case of paddle power, it’s important to consider your choices carefully. Using a paddle is much more taxing on your body because it involves using muscles that may not be as strong as your legs. Selecting a paddle made of high quality materials and with a good design will mean more efficiency and less fatigue. In other words, you get more power for less effort and in many cases, this factor is overlooked in favour of the cheaper option.

Most fishing styles require the deployment of some type of anchor to be successful. Because the kayak angler is sitting down and confined to a small cockpit area, it is not possible to access the bow or stern (front or rear) where the anchor should be fixed. A running anchor system overcomes this challenge by allowing the anchor to be run between two pulley blocks fixed to the kayak at both ends. Between the two pulley blocks is a loop of cord that has a leader coming from it which connects to an anchor via a swivel clip. This system allows you to set the anchor at either end of the kayak from your seated position. 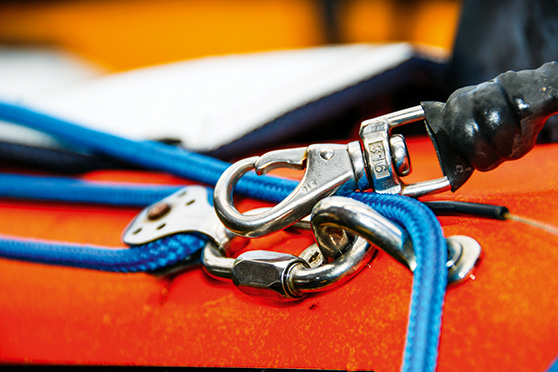 A running anchor system uses pulley blocks which allow you to anchor from the bow or stern.

Quick-release anchor systems are another option and work in the same way as the running system, however, its leader is connected to a release clip. This gives you the ability to release the anchor, an excellent option when sitting in one place with livebaits out for large predatory fish.

Fixed anchor systems can also be used with certain kayaks and need only one attachment point. This system has no pulleys, using a draw cord to retrieve the leader which is attached to the anchor. This type of anchor system is more suited to kayaks with carry handles moulded into the plastic. The leader length is crucial and should be at least half the length of the kayak. This will allow you to access the anchor while leaving the end connected to the bow or stern, meaning you can release the anchor leader quickly should a freak wave appear. 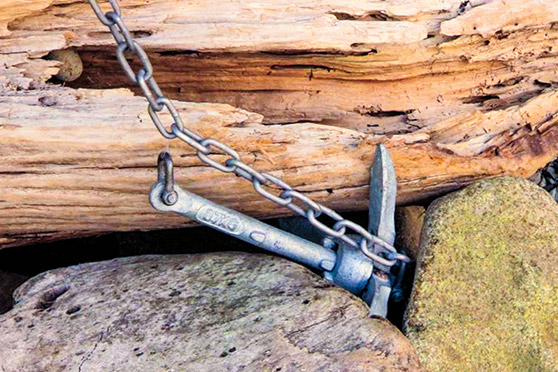 Always set up fixed anchors with a breakaway system.

Being prepared is your best way of ensuring that things go smoothly and retrieving an anchor is one area that can put you at risk of capsize. The anchor should never be positioned from a central location on the kayak as this will increase the likelihood of it flipping over.

Anchors commonly used on kayaks are either designed for fixed applications or for drifting.

In regard to drifting, drogues (also known as sea anchors and drift chutes) work well, however, it’s important to choose the correct size. It needs to be large enough to slow the kayak down to speeds of less than one kilometre per hour. As kayaks are affected by wind more than anything else, it is recommended you use a drogue designed for a five or six metre boat. The drogue won’t require a collapsing device either because the kayak is moved back to it during retrieval. However, it will need a float added to the rear opening which will prevent it from sinking below the kayak and becoming less efficient. 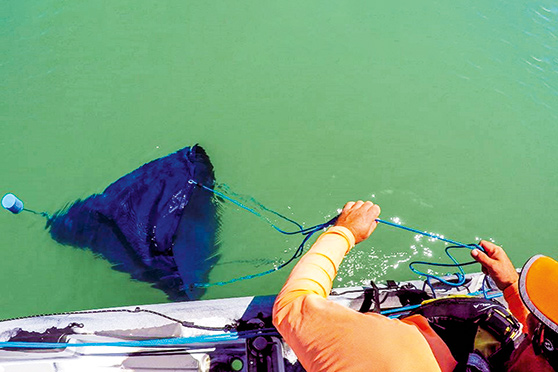 The correct size drogue will slow the kayak down to an ideal speed for fishing.

Fixed anchors designed for attachment to various substrates on the sea floor, as well as structures like marine farms, hold the kayak at one location. Five-millimetre rope connects the fixed anchor to the kayak with up to fifty metres contained on a winder. The winder should be designed to float and have the ability to lock off the anchor rope to the desired length. This allows for various depths of water to be accommodated. A thimble spliced into the rope should provide connection to the running anchor system’s clip. Winders lie at the heart of a fixed anchor system.

At the opposite end of the rope is a six-metre length of four-millimetre chain. Chain length has a big influence on the anchor’s holding power. The shorter lengths are less capable of absorbing the sudden lifts associated with swell and wind gusts. A shackle on the end of the chain which connects to the anchor completes the set up.

There are two types of anchor commonly used on kayaks. The first is the grapnel type, which is more suited to anchoring on reefs. This is because the wire prongs used in the anchor design bend, allowing it to pull away easier from foul ground. The second type uses a folding design that has wide pick-like blades which makes it particularly useful over sand. The larger one-and-a- half-kilo model is best-suited for the sand, while the lighter 700g model can still work over the sand but is small enough to be also used on the reef. To set up your anchor, attach the chain to the bottom of the anchor, then rig a breakaway system to the top. The breakaway system is designed to release the chain from the shank of the anchor when it becomes stuck on the seafloor. Once the breakaway lets go, the head of the anchor can be pulled away directly, making it easier to free. This can be accomplished by joining the shank of the anchor and the chain with six-kilo monofilament. Tie the mono so when it breaks it stays attached to the chain and can be disposed of properly, later. Folding anchors are suited to soft substrates like sand.

More and more marine farms are turning up around our coast and they have proven to be excellent places for finding fish. The marine industry requires correct anchoring within these farms and anchors that attach to the sea floor are prohibited. Purpose made hooks that attach to the top ropes on the farm (a requirement of the marine farm industry) are the best option here, allowing for safe attachment and release of the kayak. Other accessories like bungees for anchoring can offer a more comfortable ride as they absorb any jolts caused by wind and swell. Those with floats added work well with drogues and help keep everything on the surface. 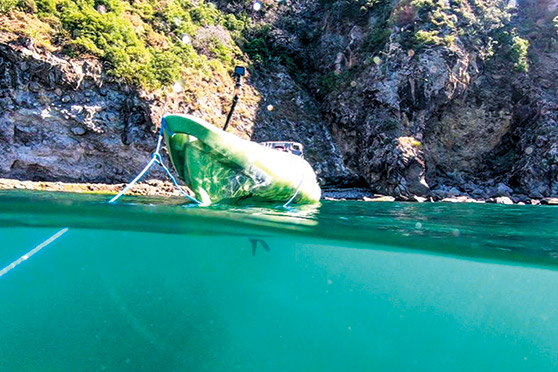 Having the ability to anchor, is an essential part of fishing and diving from kayaks.

With the kayak now able to be anchored safely, we will take a look at a few more important accessories in part three. 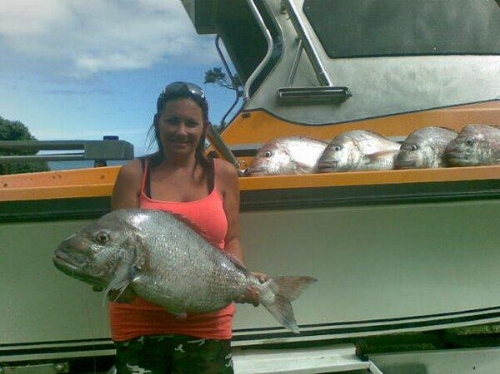