When the Ultimate Work-Up subscription promotion was won by 77-year-old reader Dawn Sangster, a few concerns started entering the head of trip host – NZ Fishing News' Managing Editor Grant Dixon. He need not have worried. He shares the story of their day onboard Ultimate Charters.

We had several things on our side. Both Dawn and John were as keen as mustard and knew one end of a fishing rod from the other – although they initially had bait withdrawal symptoms having never fished lures and soft-baits before! They were fishing with one of the most experienced and professional Hauraki Gulf skippers, Mike Trail, aboard the well-appointed Blue Water, a Yanmar powered Rayglass 2800. Part of Dawn’s prize were two new Penn outfits – a slow-pitch and a soft-bait combo, along with a selection of the latest Berkley lures. And, after one initial postponement, we got a weather window that was going to give us a morning of perfect conditions – less than 10 knots out of the north-west. 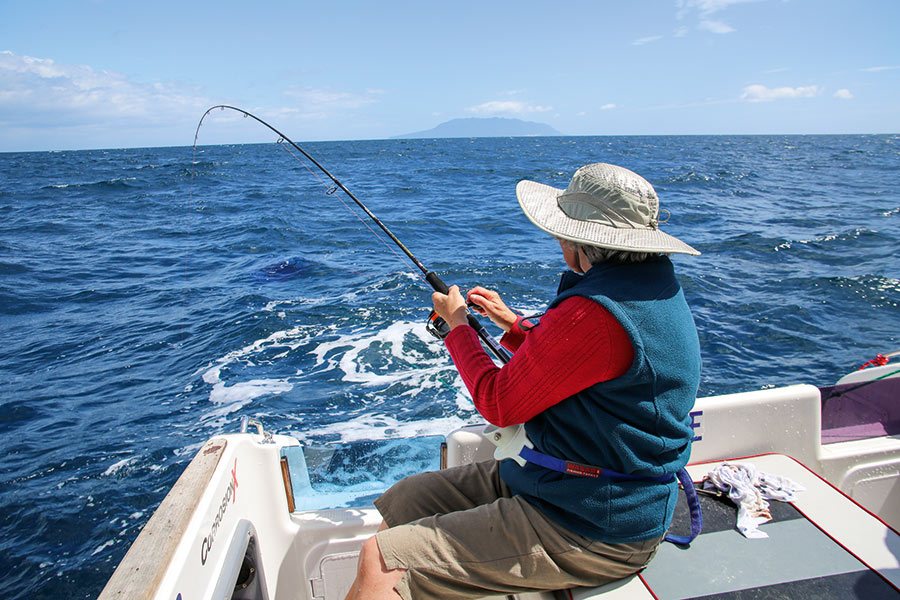 A first-time soft-baiter, Dawn was nailing the snapper, dropping and dragging a Berkley Gulp! Nemesis to good effect.

While based out of Westhaven, Mike and owner Simon Brady met us at Half Moon Bay for a 7:00am kick-off. After a thorough briefing on the safety features, the skipper explained the game plan and we were off, heading to where the work-up action had been the previous day just a little north of Anchorite Rock.

On arrival near the top of the tide, there was a little sign on the Simrad tucked hard on the bottom and a very slow bite. The gannets and mutton ducks were in the vicinity, spread over a wide area and like the fish below, were sitting tight with their mouths locked shut.

“We just need a little bit of tide run and it will all happen,” was his bold call.

You can’t beat experience. With just a couple of pannies on ice, we did a couple more drifts. Mike, who was constantly glassing the area, picked up on a couple of gannets that had lifted off and started to slowly circle the one spot. Within a minute, these nature’s fishfinders had gone from an intimate dinner for two, to extending an invitation to a guest list of hundreds to share the banquet. Where do they all come from and how do they know the dinner gong has been rung?

Regardless of that ponderable, we soon had a full-blown bird work-up in front of us, the gannets plummeting from a great height, producing numerous ‘perfect 10’ dives as they chased the baitfish sub-surface. Our guests eyed up the immediate action in wonderment, the fishing forgotten until a loaded-up rod brought them back to reality and the task in hand. Some people get their kicks from watching the dolphins and whales around the work-ups – it is the gannets that spin my wheels. After the precision dive, there is the wait for them to reappear to see whether they have nailed dinner or not – fascinating, even after seeing it so many times.

Our winners were soon in the thick of it. If they weren’t hooked up themselves, either Simon, Mike or I were handing them a buckling rod to deal to. And deal they did. Dawn had it sussed. She sat herself in the corner, using the upholstered motor box as a game chair, and with the rod tucked in her gimbal belt, was into it. They fished till their arms were tired and they were relieved after the first drift when Mike offered a little relief – ‘lines up, the action has moved and we will follow it’ – giving our anglers some rest time between rounds in what turned out to be a slugfest between anglers and fish!

After a couple of hours of full-on action, Mike said we were reaching our limit. With a wet weather front fast approaching, last drop was called, and we were soon on our way home into a building sea. The winners on the day by unanimous decision were Dawn and John who made a great tag team and are the latest converts to lure fishing.

Mike took the scenic route home, ending up in Man-o-War Bay on Waiheke’s southern side where we ate our lunch – thanks to wife Faith and her great bacon and egg pie! – and talked through the day’s action and what had made it a special experience for our winners. 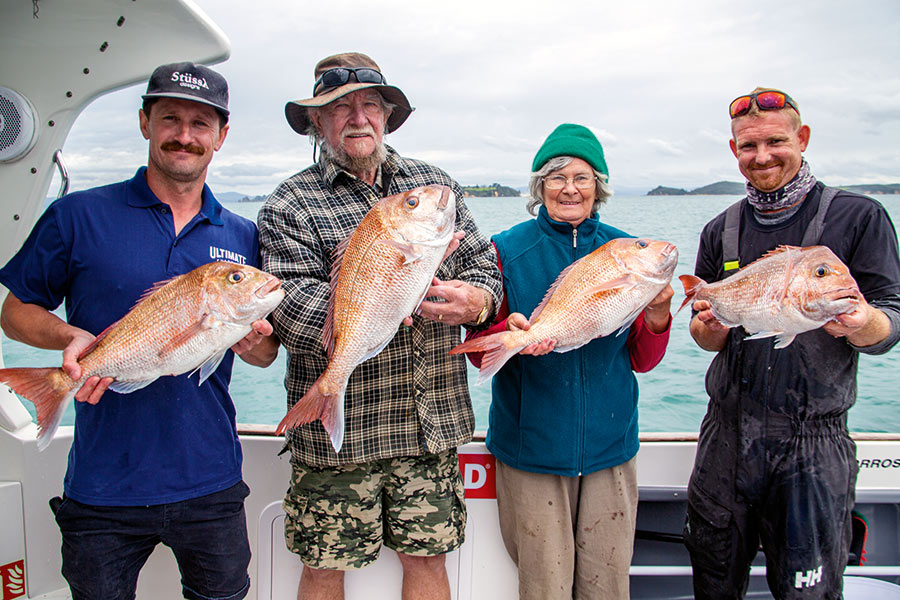 They both agreed using the lighter Penn tackle was easier, especially once the seas got up a little. They were surprised at how well such ‘thin’ rods and ‘small’ reels handled the fish, which were some of the best they had caught for some time. Both are regular visitors to the Coromandel mussel farm charter trips where bait fished on ledger rigs is the go. John used to have a Haines Hunter 535 which he fished out of Raglan for several years and they have both fished overseas, so have a fair bit of boating and fishing knowledge between them.

The trip ended mid-afternoon and after the farewells we adjourned to our home to start the filleting process. The fish had been in an ice slurry for several hours and were nicely chilled. While at the filleting bench, we reflected on the trip and the stand-out for Dawn and John was the professionalism of the Ultimate Charters operation, especially the performance of Ultimate Charters’ head-skipper Mike.

From my perspective, Mike is right up there with the best of the Hauraki Gulf charter skippers – and he is in august company. At all stages he was mindful of his client’s needs and capabilities. Each hook-up was met with a great deal of enthusiasm and encouragement. Nothing was too much trouble and the talk was around the client’s fishing, both past and present, and not his. 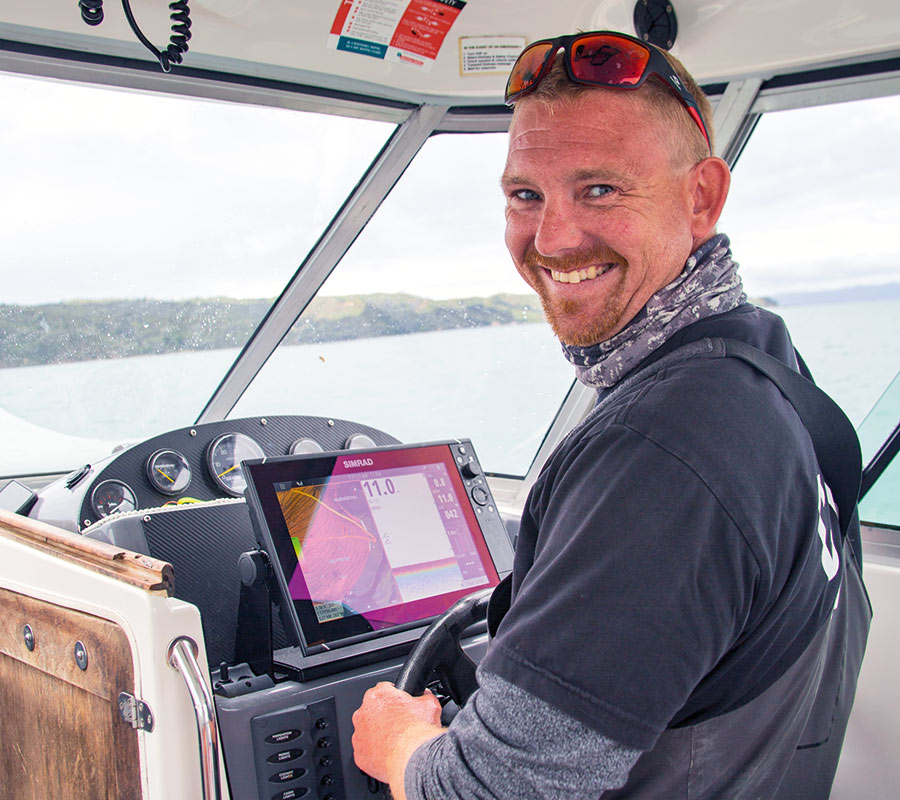 Ultimate Charter head skipper Mike Trail went out of his way to ensure the prizewinners had a great day.

Mike has been fishing all his life, both commercially and recreationally. His best angling achievement to date is a 46kg kingfish caught at the Princes Group at the Three Kings. He also loves landbased angling and has been with Ultimate Charters for eight years.

I can’t speak highly enough about his positive manner on board, the immaculate way the boat and Okuma tackle are kept and his service orientated approach.

Simon took over Ultimate Charters in January this year, coming from an event management background. He took on Ultimate Charters because it is a well-established company with a good database and a variety of opportunities, especially in the adventure tourism industry.

While the latter has been hard hit, Simon has turned to the corporate market and is investing in the future with two new Extreme Walkarounds in build – a 915 and a 715 – both to be outboard powered.

He says the Hauraki Gulf has a lot more to offer than just fishing.

‘There are some stunning places most people don’t even know exist, many of them close to the city,” Simon says.

Regardless of your needs and whether you are a serious angler or just looking for an interesting and fun day on the water, Ultimate Charters has all the bases covered. Checked them out at www.ultimatecharters.co.nz