Screaming Reels was the first 40-footer out of its Aussie manufacturer’s moulds in 1997 and was earlier this season purchased by Stefan and Katarina Jung, who operate Spot X Charters and a great little tackle shop in Russell by the same name as their recent acquisition.

At the helm is Hamish Faire, who has earned his stripes as a Bay of Islands charter skipper since 1990, most recently running his own boat Legend before a four-year stint ashore as manager of the Salt Water Connection tackle store in Whangarei.

On the deck for our trip was enthusiastic crewman Dave Gwilliams, while Hamish’s partner Tisha MacInnes was our hostess and responsible for the many offerings that tantalised our taste buds during the trip.

Screaming Reels is undergoing a remedial programme that will see her returned to pristine condition for the coming season. New cockpit decking and the addition of tuna tubes and a decent live bait tank are some of the upgrades planned.

“When we picked her up in Australia, she was a bit of a mess, and it took us three days to get the boat to where we could drive it 800 miles down the coast to Newcastle and loaded on a ship to Tauranga,” Hamish says. 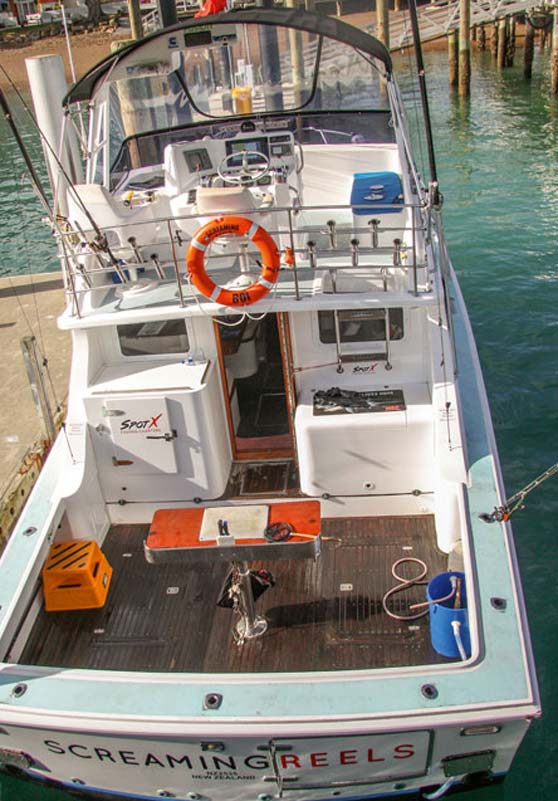 Having put the sea-miles on her, Hamish says he has not found the vessel wanting, and she is in sound shape both structurally and mechanically. Black Watchs have a reputation as great sea keeping boats and Screaming Reels lives up to the promise.

Our trip was the boat and crew’s first ‘official’ overnighter. There are several options available for multi-day trips, starting with just a skipper and crewman and anglers providing their own food, through to the fully catered, hosted option we enjoyed.

Guest accommodation is by way of four v-berths in the bow with the skipper and crew occupying a side cabin. For this trip linen and towels were provided. There is seating for five around the saloon table with the saloon space opposite currently utilised for tackle storage.

Screaming Reels, like Stefan and Katarina’s tackle store, is well appointed. The Bay of Islands presents many angling opportunities, and the boat is geared up to meet them with quality Penn, Daiwa and Fin-Nor branded tackle featuring prominently. I particularly enjoyed the Daiwa Tanacom Bull 1000 electric reels – they took the grind out of bottom bouncing in 200 metres-plus for the ‘puka and gemfish.

In terms of terminal tackle, Hamish and Dave were well prepared with pre-tied rigs when required.

While we went well armed with our own gear, if we had wanted to, we could have stepped aboard with just our personal kit and our trip would have been just as successful.

The owners have identified some improvements they will be making to the ‘fishability’ of Screaming Reels, especially in the live-bait department. Whether it is targeting billfish or kingfish and snapper, live baits play a big part in Hamish’s game plan. Currently, a large drum fulfils the purpose, fed by the deck wash hose. At one stage we would have had over 60 jack mackerel in the tank, and these stayed healthy for an extended period, but a purpose-built tank will be even better.

Taking centre stage is a bait/rigging station, mounted on the game chair base, which is also useful when filleting the catch.

At the end of our trip, Dave did a sterling job of filleting the bulk of our catch so that by the time we got back home, all we had to do was put it in the fridge – much appreciated and just another aspect of the high-quality service we enjoyed over two days.

There is a heap of refrigeration aboard. Having come from across the ditch where the boat was used for long range fishing missions, it boasts a sizeable chilled kill tank as well as a freezer, accessed from the cockpit. No problems with keeping the catch in prime condition on multi-day trips.

Screaming Reels has a top speed of 26 knots, and cruises comfortably at around 19-20 knots, courtesy of twin 460hp de-rated Cummins diesels. On the bridge electronics are Garmin and the boat is game rigged, marlin fishing being one of Hamish’s passions. One of the best places to travel is on the bridge where there is comfortable seating. It’s an ideal spot to watch over the lures if you are not the angler ‘in the chair’.

It is encouraging to see the addition of a live-aboard charter vessel joining the charter fleet in the ‘bay’. In recent times we have seen an increasing number of vessels of Screaming Reels capabilities drop out of survey. Whether it is one day or several you want, Screaming Reels is a good option. (Spot X Charters operate a smaller alloy vessel Wairere to target kingfish and snapper on half and full-day trips.)

Hamish knows his stuff, regardless of the target species, and the service on board is top notch. With the improvements planned over winter, the vessel will be even more fishable in the seasons to come.

“So what do you want to do?” was the question I was asked by Katarina and Hamish leading up to the trip. My reply was, “Whatever you do best!”.

While game fishing was out of the question, Hamish put together a plan that would see us targeting the deeper water cellar-dwellers, along with kingfish and snapper – three key Bay of Islands staples which we slowly ticked off over two days.

The first job was to load up on live-baits, so with the tank brimming with jack macks, a handful of slimies and small kahawai, Screaming Reels was pointed towards the Cape and beyond to some deep foul in 200 metres.

The NZ Fishing News crew of associate editor Sam Mossman, contributor Ian Miller and myself quite often like to take an alternative approach to the conventional way of targeting bottom species, and our attempt on the ‘puka population was no exception.

An array of various jigs and lures were dropped down, along with conventional dropper rigs with live and dead baits attached. 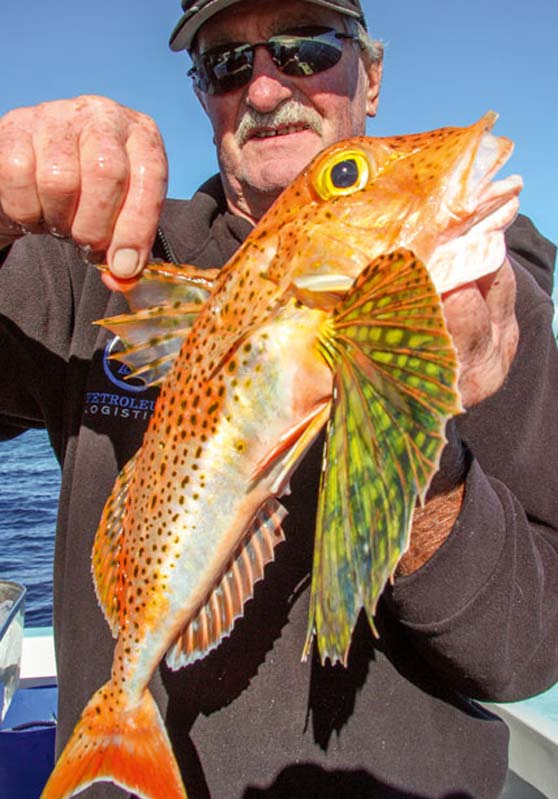 Our tactics resulted in several more unusual catches – a colourful Japanese or leopard gurnard (delicious) and an eyebrow perch – along with some gemfish, a couple of smaller hapuku and a three-kilo snapper – as well as the uninvited spiny dogfish!

We worked hard for our catch, with Hamish exploring a number of locations, with Ian capping off his last drop with our best ‘puka on one bait and a nice gemfish on the other. It was a just reward for the angler who persevered with conventional rod and reel while Sam and I ‘wimped out,’ ultimately turning to the Daiwa electric reels!

Snapper was next up, and we returned to the inner Bay to a patch of foul near Capstan Rock where we started a berley trail, down which a variety of cut and live-baits were deployed at dusk and into the night. The fishing was steady rather than spectacular as we soaked baits under the full moon.

Sam nailed the best fish, one of several into double figures. Ian had the disappointment of what would have been the top fish of the session ‘fall off’ close to the boat after he had done the hard work.

Replenishing the live bait supply the next morning, we headed back towards the Cape where we had a quick flick with the soft-baits to add a couple more snapper to the bin. I hooked my best fish of the trip and worked it out of the shallows and over the deep before the hook let go – ‘don’t say it if you don’t weigh it!’

Live-baits were deployed for kingfish a little bit wider, and it was Ian who produced the best fish, a fat specimen estimated at around 16kg. Moving into Waiwiri Rock, we slow-trolled more live-baits and flicked soft-baits around with the snapper coming up off the bottom to grab them.

By midday we had more than enough fish to keep our families and colleagues happy, so we pulled the pin and meandered our way back to Russell, processing the catch on the way. 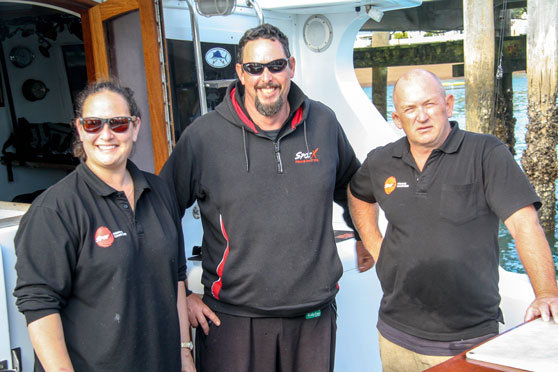 The weather had played ball, the fish had co-operated – albeit reluctantly at times – and Hamish and the Screaming Reels crew had treated us to an enjoyable couple of days on the water. The next time you are planning a stay-away trip, I recommend you give these guys a call.