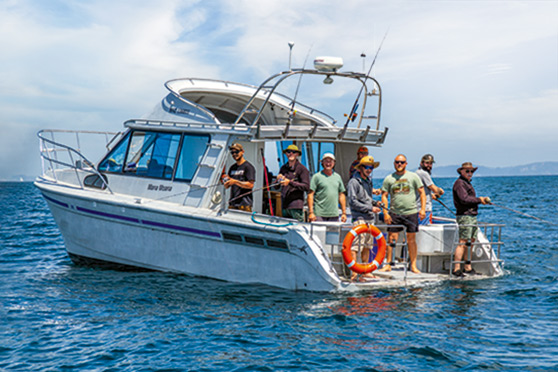 There is not much charter skipper and guide Nik Key does not know about
lure fishing and the Hauraki Gulf.

He has been plying his trade in the region for several decades and has willingly shared what he knows with thousands of fellow anglers through features in this magazine and the various www.fishing.net.nz forums.

A day on the water with Nik is always a learning curve and someone who spends the amount of time he does out there doing it is well worth listening to. He was a member of the inaugural 2005 lures only tournament hosted by Berkley and Gulp! distributor Pure Fishing. It was a length-based tournament and Nik says their winning total has yet to be beaten.

In late November, Nik, along with the boat’s owner Steven Stanford, hosted the NZ Fishing News crew and several guests on a Snap Fishing Venture charter aboard Mana Moana, an 11-metre alloy Bladerunner, for a session chasing the Hauraki Gulf work-up action.

Leaving Gulf Harbour at 7:30am we had a stiff nor-westerly up our stern and cruising at 20 knots, were soon among the birds. The action was sporadic – a work-up would appear with the gannets giving it death for 2-3 minutes before the activity shut down, only to erupt a couple of hundred metres away soon after. The gannets and other birds seemed to be flying all ways, not in any one set direction.

There came lesson number one – in the aftermath of such furious activity, it is best to fish the ‘exhaust’, the area where the action had been and where the fallout of the carnage was still drifting towards the bottom. Instead of charging around to chase the next sign of action, spend some time prospecting the area you are in. We did this and the body count on ice began to mount.

Nik fishes mainly lures, with the kabura-style his favourite. As he often has eight anglers on board, he tends to fish the heavier 200 and 250g lures, chopping and changing the skirt colours to suit. I had always been taught to fish as light a lure as practical and would normally have gone with a 80-100g head in this situation – lesson number two, get down to the fish quickly and stay in the strike zone longer with a heavier lure! Nik Key is one of the most experience Hauraki Gulf skippers out there, specialising in lure fishing for snapper.

He carries a range of quality slow-jig tackle on board across several good brands and while he will take groups of up to eight, six is his preferred number of anglers.

Nik says the bait fishing brigade are quite skeptical when they come on board and only see lures – “What self-respecting snapper will eat that?” is a common question. Given a couple of hours aboard and some good action, their attitudes soon change!

Being a catamaran, Mana Moana is a beamy boat with plenty of room to move around. The railed swim step, so long as you don’t mind wet feet or have a decent pair of sea boots, is a good place to fish from. Powered by two Steyr 246 turbo diesels, the vessel cruises at 20 knots, getting the anglers to the fishing grounds at a good pace, allowing more fishing time.

As well as day trips, Nik can also arrange overnight and multi-day excursions to Great Barrier where there is a selection of accommodation available. He does not do live-aboard charters as Mana Moana is not set up for them, although there is a small galley to heat food and make hot drinks in the colder months.

Another charter option is catering to corporate needs. This includes customer hosting and team building and rewards – a healthy way to say thank you for staff’s support and good work. It doesn’t necessarily have to involve fishing, but can simply be a cruise with swimming, snorkelling and picnicking in a remote Gulf location the key focus.

Nik practices ‘fishing for abundance’ where all fish, if over the legal size, are kept, especially where there is any danger of them suffering from barotrauma when caught in deeper water. There is no high-grading of the catch and if the bins are full of big fish, even if the group limit has not been met, Nik will pose the question – “Do you guys really need to get your seven snapper each, given the weight of fish you already have?” He says most crews will ponder the question and usually stop fishing.

While we did not catch too many large fish – Duncan Stirling won the sweepstake with a personal best 55cm snapper – we caught a collective limit averaging around the 45cm mark. Perfect filleting and table fish. 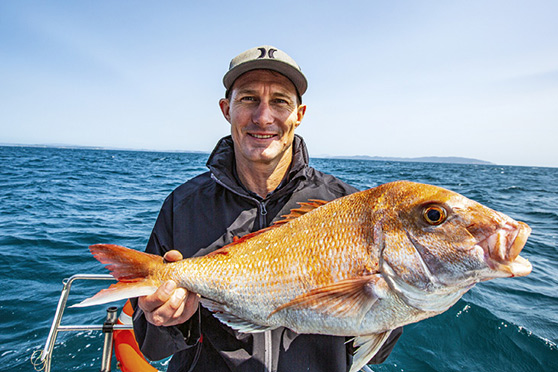 Hella Marine's Duncan Stirling with the best snapper of our short trip - a 55cm specimen destined for the dinner table.

Nik, ably assisted by crewman Josh Newman, spent a few hectic hours netting and unhooking fish, and iki-ing them before they went down on ice. When the bite was really on, Josh would have three or four snapper in the net at any one time. To those on board who had never experienced work-up fishing with gannets diving within metres of the boat, it was an awesome sight.

On most drops, the lures hadn’t even arrived at the bottom before they were smashed by the voraciously feeding snapper.

A highlight of the trip for Earl Rigden was the landing of a respectable 91cm kingfish. It ran him around the boat on the lighter jig tackle but his persistence paid off – not to mention Nik’s good knots – when the fish was finally landed much to the delight of his crew members. 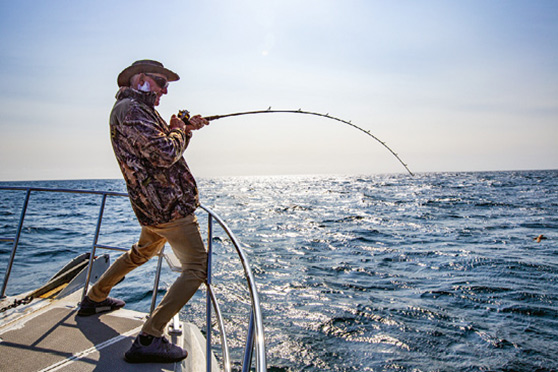 Earl Rigden had a great scrap on his hands, fighting and landing a respectable kingfish on the light jig gear.

Josh and Nik kept a count of the fish as they came on board, running a ‘leaderboard’ for the longest snapper. Josh did a great job, not phased by the odd tangle and working hard to get everyone back fishing as soon as possible. The crew aboard a charter can make or break a trip and Josh’s enthusiasm and willingness to help played a big part in the success of our day. He and Nik work well together.

I thoroughly enjoyed my day and while I preferred to have the camera in my hand rather than a fishing rod, it was great to see the enjoyment others got from the hot bite.

By just after 10:30 it was all over and we headed back to base four hours earlier than planned, but nobody felt short-changed!