When fishing guide Lucas Allen decided to upgrade his boat, he had no hesitation going to FC Boats, based on his satisfaction with the smaller FC 430 tiller-steer model he was replacing.

Lucas’s business centres on chasing Tauranga Harbour’s population of kingfish, especially those that hang around with stingrays, of which there are hundreds feeding in the shallows over the harbour’s extensive flats.

These ‘ray-riding’ kingfish are the main drawcard for saltwater fly fishers availing themselves of King Tide Salt Fly’s services, but Lucas also targets kingfish around the harbour’s numerous poles and markers buoys, as well as fish resident on reefs outside the harbour. In addition, anglers can expect to catch kahawai and snapper on fly, as well as other species in season.

Interestingly, kingfish only shadow short-tail black rays (stingrays) – we saw lots of eagle rays, but none had any kingfish with them.

King Tide Salt Fly’s guiding season usually extends from November until May, or sometimes longer depending on angler demand and kingfish numbers. As well as guiding, Lucas is a brand ambassador for BLA, which among other products supplies Humminbird marine electronics and Minn Kota trolling motors and associated equipment. When he’s not guiding, Lucas conducts Humminbird and Minn Kota training sessions all over New Zealand and provides customer support for BLA products.

King Tide is a purpose-built fly-fishing vessel. The FC 535cc platform was a great starting point: it’s stable, roomy and a dry runner, which is important in a centre-console. A centre-console was the obvious configuration for a fly fishing boat and Lucas, working closely with FC Boats, maximised the size of the raised casting platform in the bows. Covered in customised U-Dek flooring and incorporating masses of under-deck fishing tackle storage, this platform provides the perfect position to cast a fly through an arc of 270 degrees. The most obvious feature of the bow is the Minn Kota trolling motor. It’s a marine spec, 80-pound thrust Terrova model with iPilot LINK. Minn Kota’s iPilot features integrated GPS and SpotLock for precision boat positioning and the motor can be controlled either from the handheld remote control, or from the helm using the Humminbird Solix’s Minn-Kota LINK virtual remote.

The trolling motor is a vital piece of equipment for this specialist fishing application. This is a 24-volt system: two dedicated deep-cycle batteries provide enough juice to run the electronics for a full day. Two onboard Pro Mariner chargers plug into mains power at the end of the day, recharging all the vessel’s batteries overnight.

King Tide carries 160kg of batteries: two 130-amp deep-cycle AGMs for the Minn Kota, one cranking battery, another 130A AGM house battery and a battery to power the auxiliaries. Auxiliaries include the VHF and nav lights for survey requirements, and the transom-mounted Talon anchoring system.

Using the Minn Kota, Lucas moves quietly over the shallow flats stalking black stingrays. Almost silent and able to operate in a metre of water or less, the Minn Kota lets Lucas get his clients close enough to sight-cast at any kingfish travelling with rays. The Talon allows him to stop the boat dead in the water and hold it in place, effectively ‘staking out’ any areas of interest.

This was the first time I’d seen a Talon in use. It’s an electrically operated, extendable pole with a composite end section that penetrates the bottom substrate to hold the boat in place. The 8ft model allows a maximum depth of just on two metres. It works really well, allowing Lucas to hold the boat in place at the push of a button. The Talon is also linked to the Solix 12 interface.

Tauranga Harbour is vast – over 200 square kilometres in area – and much of it is made up of shallow tidal flats covered in eel grass and shellfish beds. We fished an area reasonably close to town, and there was no need to travel any further, but Lucas is spoiled for choice when it comes to fishing locations.

Although the sky was at times overcast which made spotting fish difficult, we were fortunate enough to find a few rays with kingfish in attendance. One ray in particular was flanked by three nice kingfish. They were unusually green in colour, making them hard to see over the eel grass.

Every time Lucas got the boat into a good position, I cast my fly close to the ray, which elicited a few kingfish follows but no bites. We followed the ray for perhaps 10 minutes, changing flies a couple of times, and just when it looked like we might have to find another ray, a surface popper did the business. The smallest of the three kingfish sucked it off the surface like a brown trout eating a dry fly.

Lucas supplies good quality fly fishing tackle for his clients. I was using a Scott #8 saltwater rod and a Hatch reel with an Airflo Intertip fly line. He also carries #10 and #12 outfits with floating, intermediate and fast-sink lines. The flies are all hand-tied by Lucas.

Assembled fly rods are stored in racks under the gunwale either side of the cockpit, the tips sliding up into a custom compartment under the raised foredeck. King Tide can accommodate three assembled outfits per side, plus three more stored vertically against the side of the console. Additional gear is stored under the foredeck, accessible via three large deck hatches. Four through-coaming rod holders cater for traditional rod and reel combos.

The #8 outfit handled my kingfish just fine, though the fight was as tough as one would expect from any kingfish. Over a clean bottom like this, you can take your time bringing the fish to the boat, and with 14-pound leader, it doesn’t pay to be too heavy-handed. The fish was boated, photographed and released.

Mission accomplished, we squeezed over a fast-drying flat on the electric to a channel where we could fish through the bottom of the tide. King Tide draws only 400mm of water with the outboard tilted up and the Minn Kota set as high up on its pole as it can go.

The FC 535’s console offers a decent storage locker, grab rails and enough room on the fascia for a variety of instruments and gauges, including volt meters (two), USB chargers, a 4” Mercury VesselView display, battery isolation switches (two) and a Cobra VHF. The stainless steel wheel looks very smart and a big Icey-Tek chilly bin behind the console also serves as a seat. A clever tie-down system facilitates its easy removal, leaving a snag-free rear deck with nothing to grab a fly line or stub your toes on.

We used the Talon to anchor King Tide on the side of a channel while we waited to ambush any rays moving into the deeper water off the flat. While we waited, I caught a succession of feisty little kahawai, which passed the time very nicely.

A 115hp Mercury Command Thrust provides the primary motive power for King Tide. This is a high-thrust variant with a heavy-duty gear case running a larger-diameter propeller. The Mercury easily copes with King Tide’s usual operating load and gives a top speed of 34 knots. A 65-litre underfloor tank allows three days guiding on the harbour between fills. 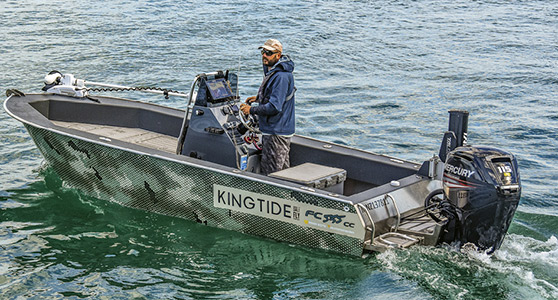 A stop at one of the harbour’s many navigational marker poles graphically demonstrated the Solix’s Side-Imaging capabilities, clearly showing a group of kingfish hanging behind and to one side of the marker. The Solix identified not only individual fish, but how far they were from the boat and from the bottom.

Humminbird’s MEGA Side-imaging scans 30m to each side of the boat, down to a depth of 30 metres, displaying structure and fish with remarkable clarity and definition. A simple change to lower frequencies provides even greater depth and range capability.

Fishing the poles with #10 outfits, including a couple of markers outside the harbour, raised a few lookers but no takers. I was quickly reminded how physical fly fishing big flies with heavy gear can be, especially if it’s been a while (years!) since you’ve done it. My arms wearied long before Lucas got tired!

Our final hurrah involved a run of several miles out to sea, the FC 535 proving a dry and comfortable traveller, despite a slightly messy conditions. Our destination was a reef where we hoped to target kingfish on deep-sinking fly lines. However, the sight of skipjack tuna splashing on the surface changed the game plan and we spent the next couple of hours chasing them.

Chasing skipjack on fly demands a fair bit of patience, since they move very fast. Intercepting them is not easy and often you only get in one cast before they’ve moved past. We did plenty of moving, but managed to hook several fish, landing a couple. Kingfish pull hard and are a great opponent on fly-fishing tackle, but skipjack tuna make an 8-weight reel scream like no other fish!

With the autumn afternoon drawing to a close, we finished our day close to the Mount where we encountered mixed schools of skipjack and kahawai. The skippies eluded capture, though we each hooked a couple, but the kahawai were easier to fool. Much bigger than the ones I’d caught earlier inside the harbour, they pulled like trains, leapt and ran. The deep line burn on my index finger is testament that they strike hard too!

I had enjoyed an interesting and exciting day aboard a superbly set-up fly fishing vessel with an engaging guide who really understands his stuff. Lucas knows Tauranga Harbour like the back of his hand but can also be engaged to fish other waters around New Zealand. He works closely with selected charter/guiding operations, freshwater and salt, to organise fishing itineraries for local and visiting anglers.

And while many of Lucas’ clients are from overseas, the fishing experience he offers is something every Kiwi fly fisher should try. Fly fishing for ray-riders is highly visual, making it very exciting, and the quality of the kingfish available may also surprise. Some of them top 15kg or more – quite a catch on an #8 fly rod.