White Pointer Boats has been on quite a journey. Owner Rex Briant started out as a diesel mechanic, then, after a two-year stint in Canada building aluminium boats, he moved back to his home town of Gisborne in 1991 and started building custom alloy jet boats there.

The White Pointer brand was set up in 1994, and a year later Fishing News’ Managing Editor Grant Dixon and I travelled to Gisborne to review the White Pointer 5.7m Sports Cabin model.

The weather was, in a word, crap. After a couple of days of 25- to 30-knot easterlies, we managed to get as far as the harbour entrance, where we encountered 1.5–2m seas. Even then the rough-water sea keeping of the boat was impressive, and the company went on to develop its reputation for robust, highperformance hulls, and grow from a one-man band to employing 15 staff members.

Likewise, the the White Pointer team’s skills, finish quality, complexity and attention to detail have developed to high levels, and large, highly spec’d custom-made boats based on the company’s proven hull designs are regularly produced. 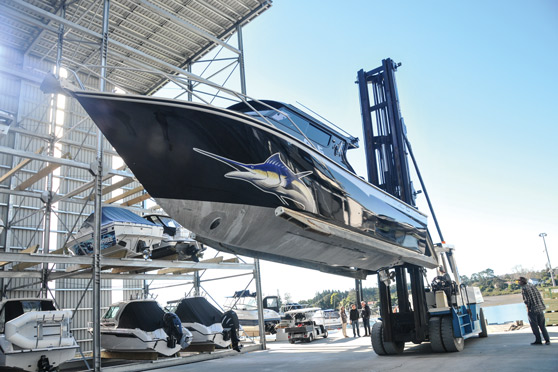 When Tony and Melissa Clark, owners of Summit Homes, went looking for a new boat, they talked to White Pointer, visiting the Gisborne factory in March of last year, then again during the Hutchwilco New Zealand Boat Show in May, 2016. A year later, their new boat, the 970 Pro Sportsman Qali, was a major feature of the White Pointer stand at the same show.

Qali is quite an eye-catcher – a big black boat with a curved transom and a finish so well faired it could easily be mistaken for fibreglass. Unpainted areas are Nyalic finished. Rex Briant describes it as a Pro Sportsman (White Pointer’s most dedicated fishing design) with Custom-Cruiser styling. The Custom Cruiser range features up-market alloy boats with live-aboard features and a very high level of finish. Tony and Melissa obviously believe in having their cake and eating it, too – a hard-core fishing boat with all the comforts!

Although the 970 is trailerable, the Clarks elected to avoid the costs of a big trailer and tow vehicle, along with the effort and time spent towing and launching, by basing their boat at the Mount Wellington Marine dry-stack facility on the Tamaki Estuary. A call, text or email sent ahead sees the boat launched and ready to go when the owners arrive, and freshwater washed and the engine flushed after returning, before being safely stored in the giant racks ashore. This means less hassle and more time spent on the water. Qali is powered by a Volvo Penta D6-370 inboard with DPH Stern Drive and G4 Duo Prop. As a docking aid, a Lewmar 140 TT 2kw Bow Thruster has been fitted. Diesel fuel capacity is 600 litres. Three batteries (one starter and two house) with isolation switching are mounted in the transom. Solar panels on the wheelhouse top, connected to a Morning Star PWM (Pulse Width Modulation) Charge Controller, keep the house batteries topped up. This is an important aspect, considering the number of electrical systems in this boat, and allowing peace-of-mind that, say, the bilge pumps will not run the boat’s batteries down if on a mooring in heavy rain.

Conditions were excellent as we travelled down the Tamaki Estuary and out into the Hauraki Gulf, the boat being a pleasure to helm thanks to its powerful hydraulic steering and positive Volvo Penta throttle/shift.

By the time we returned later in the day, the wind had picked up to around 10-15 knots against the Motuihe Channel’s strong currents, creating a half-metre chop. However, the big 970 hardly noticed the sea, with the 18-degree, fine-entry hull slicing through it softly, smoothly and quietly, thanks to White Pointer’s robust internal keel bar, frame and stringer construction, and the high level of sound-proofing around the engine.

The engine has a second set of helm controls out in the cockpit, including throttle/shift, gauges, toggle-switch steering and bow thruster. The scuppers can be locked shut, and the curved transom allows the boat to be backed down quite controllably without flooding the cockpit.

Visibility was great through the curved, tinted, toughed-glass ‘screens and sliding slide windows. The two freshwater windscreen washer/wipers have a useful second control: a cupped button at the base of the throttle that can be easily reached by the helmsman when underway in rough conditions, without looking, giving a single wipe.

Communication with the cockpit and ventilation is aided by a lockable glass bi-fold cabin door and a large rear window, which is can be electrically lowered down inside the rear cabin bulkhead.

The electronics are extensive and based around a Furuno Navnet TZtouch2 MFD (Multi-Function Display) with a 15.6” touch-screen. The sounder is served by two transducers (2 and 3kW). A through-hull temperature gauge is fitted, as is Furuno NN3D plotter with C-map. The Furuno solid-state 25W Doppler Radar features a bird radar function. A Furuno Navpilot 711C Fantum autopilot is integrated into the system, and the Furuno Hemisphere V113 Satellite Compass keeps everything on the straight and narrow. We were fortunate to have Nick Fogarty from ENL, the Furuno agents, aboard to show us how this integrated system worked.

Another cool item is Mente Marine’s Attitude Correction System, supplied by New Zealand agents Four Seasons Marine of Whangaparaoa. Linked up with a set of Lectrotab trim tabs, this unit will automatically trim the boat for roll and pitch, countering sea conditions, loading and crew movements.

I joked with owner Tony that with all the automated systems on board, he could just about send the boat out fishing on its own, while he stayed home and mowed the lawns!

SeaDeck Custom Decking has been used extensively throughout the boat, from the cabin to the cockpit, gunwales and transom. This material is great underfoot, gives good footing, is easily washed, and adds another level of elegance to the rig. The vee-berth will sleep four (one on a removable bunk), with a further berth created by lowering the classy rosewood cabin table and adding squabs.

Bench seats are fore and aft of this table, and a reversible bolster plus fold-down footrest for the front seat allow passengers to face either direction. The helmsman’s seat is a comfortable, customised, upholstered bucket seat mounted on a shockabsorbing base, and it features a roll-back bolster to enable more space when standing.

Behind the helm seat is a rosewood galley unit, including a four-burner Thetford Caprice MKIII stove and oven, along with an Isotherm fridge and storage drawers.

Two overhead hatches above the helm seats aid ventilation and light, and there is a heap of stowage under berths and seats, in side shelves, and in an under-deck hold in the cabin. There is no shortage of grabrails in all the right places. 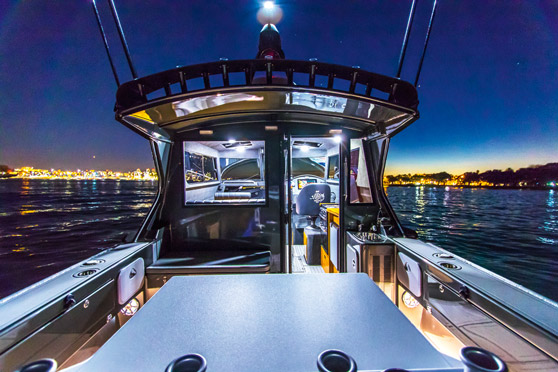 Out in the cockpit is a stainless sink with a 150-litre-capacity hot and cold freshwater system with a gas califont water-heater. The hot tap is a pull-out nozzle type, allowing a hot freshwater shower in the cockpit after a swim or dive – or just because you want one.

An insulated freezer/bench seat is set against the rear cabin bulkhead and an icebox/seat mounted on the engine box – a good spot to watch the lures from. (Another good idea: a rubbish bin is built into the cockpit side, as is a deck-wash.)

The cockpit also features: a decent cockpit door which folds down to form a boarding ladder and hand rails; hatched sidestowage lockers; and pole/gaff etc side racks.

The deck extends out over the drive leg, increasing cockpit space. The bottom plates to each side of the leg also extend out, effectively acting as ‘flopper stoppers’ when underwater with the boat at rest or off plane.

The Pro Sportsman is aptly named, with a host of fishing features. The drive shaft is underdeck, allowing for a walkaround engine box and full access to the transom for fishing. The engine-box top is put to good use, housing an icebox that doubles as a rear seat, game chair mount, and a bait-station with knife slots and 12 rod holders that keeps the tackle away from spray while underway.

Melissa Clark insisted on having hand washers that can be used after handling bait, avoiding transferring gunk to rods, reels and around the boat in general. Three of these are spaced around the cockpit, activated by a button you can press with your thigh, with a stirrup holding the button on if required. A jet of saltwater squirts overboard from under the gunwales, allowing you to rinse your hands over the side. A mackerel-sized live-bait tank is built into the transom wall with top-hatch access and viewing window, so baitfish health can be monitored. Two good-sized tuna tubes are built into the gunwales. These are tapered so will suit any size of the larger baitfish species, such as skipjack, kahawai etc. Also built into the gunwales are two sets of tackle-storage drawers, handy for regularly-used terminal tackle or tools.

Other game-fishing fittings include a set of the excellent Ocean Blue outriggers from Reel Rods, which can be pulled down and stored on the hard top for transport, and the transom door (already mentioned), which makes pulling big fish on board much easier. 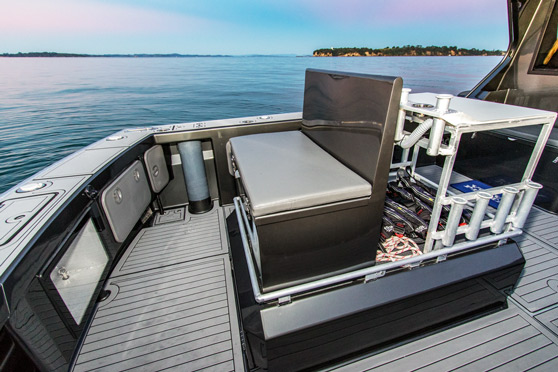 In addition to the bait-station’s 12 rod holders, there are thirteen more in the rocket launcher on the hardtop, and 10 more rod positions fitted around the gunwales, along with built-in sinker cups. That makes an amazing 35 rod positions around the cockpit in total, and there are also an additional six clips under the fore-cabin roof where big-game rigs can be stowed away.

Finally, catch stowage is well provided for, with an icebox on the engine cover, a freezer against the cabin bulkhead for processed fish, and a large fish bin under the deck, forward of the engine. This last item can be lifted out to access the catch and for cleaning. It features a ‘postal slot’ in the deck hatch so that small- to average-sized fish can be dropped into the fish bin without lifting the main hatch.

The big white pointer is quite a machine, and there are so many clever things in the design and fit-out that I am bound to have missed some. Besides offering excellent sea performance, a high-quality finish, and being exceptionally well suited for stay-away comfort and fishing applications, I really admired the attention to detail on this boat. For example: all stainless screws and other stainless fittings are insulated from the aluminium hull; welds are ground and perfectly radiused; and only top-quality fittings are used. White Pointers built to this level must rate amongst the highest quality aluminium boats made in this country. 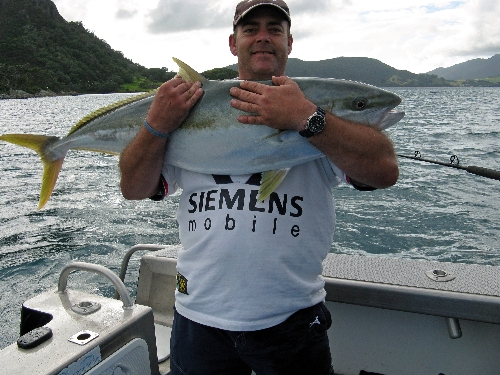