Mark Presnall is well-known in the marine industry, having spent the last 15 years ‘messing around in boats’. His previous posting was with Suzuki Marine, before he went on to start Ultimate Boats, manufacturing aluminium hulls and one aluminium-glass model.

Ultimate now has eight models in the line-up, including a 21-foot hybrid that features an alloy hull with a fibreglass liner from the gunwales down. The test boat, an Ultimate 18 C, is basically a six-metre vessel.

The substantially built 18 C features a 17-degree deadrise at the transom, variable to 34 degrees at the entry. The bottom and transom are made from 6mm plate, with the sides 4mm thick. Construction includes an 8mm keel-bar with three bearers down each side, frames/bulkheads at 800mm centres, down-turned chines and a planing strake on each bottom plate. Fuel is carried in a 150-litre underfloor tank with the filling port on the outside of the transom wall.

The day of the boat test was marginal. The forecast was appalling with rain and near gale-force winds kicking in before midday. I had driven to Tauranga the night before so I could be at the ramp for an early start.

Mark Presnall had left Auckland in the wee hours to be there, and Graham Kennedy from Suzuki had the toughest gig, towing the test boat up from Whanganui overnight, before continuing on to display the rig, with Mark, at the Tauranga Boat Show after the test.

I had first met Mark Presnall when he was with Suzuki and I was reviewing their 20A, a then-new Suzuki 20hp four-stroke outboard. Considering his history with the Japanese outboard manufacturer, it was no surprise that the Ultimate 18 C (Cuddy) was powered by another brand-new Suzuki model, the DF150 ATX four-stroke. In fact, the outboard on the test boat was the first unit ever released onto the market anywhere in the world. Along with improved performance, ‘lean burn’ fuel efficiency and smooth throttle/shift, it had some other cool features. An updated Multi-Function Gauge allows easy installation of ‘Troll Mode’ which allows stepping the engine revs up and down in 50rpm increments. The Multi-Function Gauge, with the addition of a downloaded SDSM app to your tablet, phone or other device, allows you to Scan a QR code, download engine data and email it to a Suzuki service centre to diagnose any issues.

On the morning of the boat test, as forecast, the skies were leaden and we could see the rain piling over the Kaimai ranges and into the Bay of Plenty, driven by a chilly south-westerly. We had just enough time for the photoshoot and to run the 18 C outside the harbour entrance at Mount Maunganui to find rougher conditions to test the performance, before scuttling back to the Sulphur Point boat ramp before the weather really turned to custard. By the time the front hit, we were tucked up in a warm café near the ramp with nice hot drinks.

I was impressed by what I had seen, heard and felt. The hull was a soft traveller and cut through a metre of sea nicely, while the 150hp Suzuki was quiet, smooth, easy to control and demonstrated plenty of muscle when needed.

The pointy-end of the boat features bow rails that extend outside the line of the hull, giving some protection to the bow and side panels when pulling up to jetties and helping constrain the warp in the fairlead. The anchor hatch is open-topped, and a crucifix bollard is fitted. There is room for an anchor winch if required.

The foredeck can be accessed by climbing around the sides (non-skid finish panels have been fitted) or through the hatchway in the forecabin.

There is stowage space under the 1.8m long berths in the cabin, which can sleep two adults with a berth-infill fitted. More stowage room is available in side-shelves and the cabin is lined to the deck with marine carpet. A toilet can be added if required. 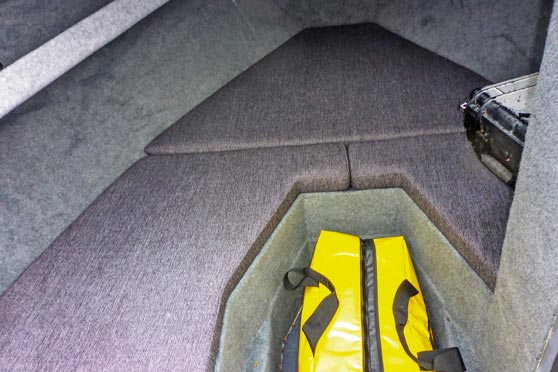 Outside the cabin is a large dash with plenty of space for odds and ends under the shelter of the windscreen. A passenger grabrail is fitted to the port side.

The helm console on the starboard side houses hydraulic Ultraflex steering supplied by Lusty and Blundell, along with a Raymarine Axiom 7 touchscreen all-glass multi-function display, which takes care of the sounder-GPS-plotter tasks. Other devices flush-mounted into the console include a Uniden VHS, switching, and the various Suzuki attachments that we will get to in a moment. 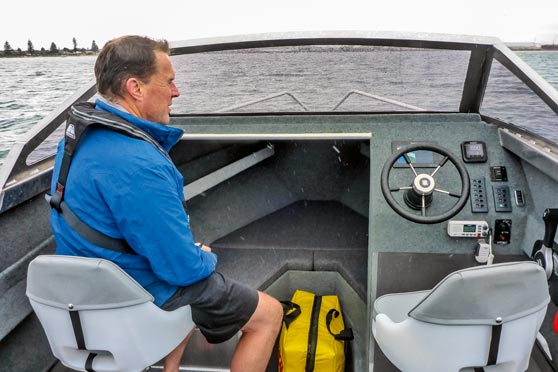 The sealed deck drains to a sump under the transom wall from where water is drained by an 800gph bilge pump with float and manual switches. The deck is attractively finished in SeaDek 3mm panelling.

Decent-sized shelves run along each side of the cockpit. The battery is housed in a protective box up on a shelf in the transom wall, alongside an isolation switch. There is room for a second battery if desired.

Other fishing fittings include four aluminium rod holders welded through the gunwales and two more attached to the sides of a permanently attached baitboard on the transom. As a demonstrator, the test boat had been left fairly plain, but Ultimate is happy to customise and everyone has their own ideas about what they want from a boat.

The ‘trailer’ part of this trailer boat is supplied by Enduro, a cradle ‘A’ frame, single-axle design with leaf-spring suspension, multiple wobble rollers, a manual winch and a wind-down jockey wheel. It is designed so the inside of the frame can be flushed with freshwater, prolonging the life of the trailer. Tow weight of the rig, dry, is about 1450kg. 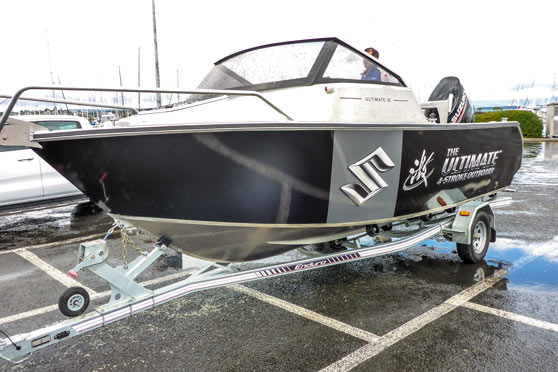 Mark’s stated intention was to build “a good, sturdy fishing boat that is blue-water capable, but affordable to those on a budget.” I think he has achieved this. The well-finished and robustly built Ultimate 18 C is a comfortable rider, stable and high-sided to provide a flat surface for anglers to lean on when working a fish. The high sides, along with a good level of reserve buoyancy, offer security when taking the kids out. The rig looks smart with curves and slightly raised sheer lines. It is CPC rated for up to six adults. Add100kilos of gear and 150 litres of gas and it still has 320kg of reserve buoyancy. 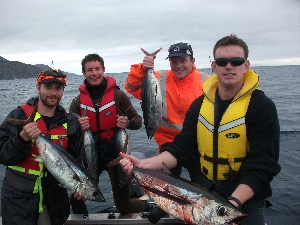