Mark Presnall is well-known in the marine industry, having worked with Suzuki Marine before starting Ultimate Boats, manufacturing aluminium hulls. Sam Mossman checks out a recently-completed Ultimate 16 Centre Console made for Richard ‘Richie’ Hanna, a super-keen Auckland fisho who, amongst other things, has a company called Option Tackle which represents products from Japanese manufacturer Jackson Lures, who make a range of innovative lures in the jig, minnow and topwater field.

The Ultimate 16 CC is, as its name suggests, around 16 feet long (actually 5.1m or 16.7 feet). I have been a fan of centre consoles for 40 years and I reckon the smaller models see the configuration at its best, opening up a good amount of space for fishing (assuming the hull is stable enough to allow anglers to stand up and move around). The Ultimate 16 CC is just such a boat – in spades.

Ultimate Boats have done an excellent job on this hull. It looks great, and is a practical and functional fishing boat, ideal for inshore sport fishing that involves drifting, and casting and jigging with lures, which is owner Richie’s favourite form of fishing.

One of the biggest advantages of the centre-console configuration is the ability to use much more of the space in the bow. The natural rise of the 16’s bow is incorporated through the building of a raised casting platform, which also allows the bowman to easily belly up to the forward bulkhead to work the anchor or drogue. The warp is guided into the fairlead by dropping bow rails. A reasonable sized, open-top anchor well holds all the ground tackle necessary (Richie doesn’t do much anchoring, mostly drift-fishing, casting lures and jigging) and there is a tie-off cleat behind. One of the biggest advantages of the centre-console configuration is opening much more of the space in the bow.

A bench seat is built in front of the console with internal stowage and a comfortable squab and backrest. This, and the other upholstery in the boat is finished with a padded, attractive black ‘graphite weave’ material and is extremely comfortable to sit on. Auto and Marine Upholstery of Whakatane have done a really nice job.

The deck, gunwale and transom tops, boarding platform and several other surfaces are finished in SeaDek, a closed cell EVA product from Batavian. The ‘Faux Teak’ colouring used really gives the look of the boat a lift, as well as providing safe and comfortable footing on both hot days and cold.

The console itself is perfectly proportioned, leaving enough space between it and the side of this relatively beamy boat to easily pass to the bow, even with a loaded rod! A tinted polycarbonate screen is mounted on the top, providing more shelter to the helmsman and a forward-facing Hella floodlight is mounted on a rail above this, the rail doubling as a grabrail. 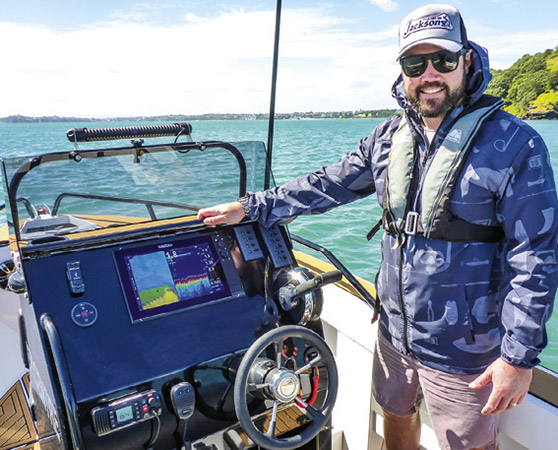 The console itself is perfectly proportioned, leaving enough space between it and the side to easily pass to the bow, as Richie Hanna demonstrates.

A dash tray is tucked behind the shelter of the ‘screen, with a couple of cup holders incorporated. Mounted on the console is a Scanstrut ROKK waterproof USB charger (primarily for cell phones), the usual switching, the VHF radio aerial, a GME G.Com VHF, the Mercury throttle/shift and a Simrad NSS EVO3 multi-function unit which provides engine instrumentation, GPS plotter and sounder functions.

Richie likes his music and the boat is fitted with a Fusion sound system. The main unit is mounted in a protected spot inside the console and controlled onscreen as another function of the Simrad MFD. Speakers are on the forward bulkhead and simple functions (on-off, volume etc.) are controlled by an easily-accessed weatherproof switch on the console. Sheltered stowage space is inside the console, supplemented by a hatch-entry under-deck hold just behind it.

The helm bench seat is a comfortable perch and well finished, as mentioned. The front face of the squab curves down to provide a good leaning post if you want to travel standing. The stowage space under the seat is a great, easy-to-get-at spot for safety gear and other items you want at hand. On the rear of this seat are four rod holders which keep the reels out of the spray when travelling. Finally, an ice box fits underneath.

The cockpit has approximately two-metre long side shelves for general stowage and all-round toe space to help anglers stay on balance when working around the sides.

Five tie-off cleats are spread around the sides of the boat (including the single one on the bow) giving plenty of tie-off options. A 3+1 Active transducer for the Simrad is fitted on the stern.

Fishing is what this boat is all about and I really couldn’t fault it as an inshore sportfisher. Let’s start with rod holders: there are two built into the foredeck (with matching cup/lure holders) – perfect for forward casting anglers who want a spot to carry or store their casting rods while moving on to the next spot. Two more through-gunwale rod holders with accompanying lure/drink holders are along each side of the cockpit and there are four ‘carry’ holders across the back of the helm seat, as previously mentioned.

A low-profile bait station is permanently fitted to the transom, and another four rod holders are mounted on the back of this (a total of 14 rod positions in all) along with a gutter, overboard drain, knife slots and iki spike holder.

On the starboard side of the transom wall are a couple of tuna tubes which drain overboard, and livebait options are supplemented by a ‘mackerel’ tank which is built in under the transom step-through and features a viewing window.

Live bait options are supplemented by a 'mackerel' tank under the transom step-through.

For divers and swimmers, the port side features a well-designed dive ladder adjacent to the transom step-through. It is a ‘T’ type so divers can climb or descend with their fins on. It is made from tread plate with broad steps that have raised tips (a bit like those on the end of the Dreamliner’s wings); all features that stop dive-fins and feet slipping. Naturally, a grabrail and SeaDek finish on the platform are provided.

The port side features a well-designed dive ladder adjacent to the transom step-through.

The test boat is powered by a Mercury CT 100hp Fourstroke outboard spinning a 17”-pitch Vengeance prop. The ‘CT’ in the model name stands for ‘Command Thrust’ and indicates the use of a heavy-duty gearbox and shaft, designed to lift heavier boats on to plane and hold them there at lower speeds, without impacting top speeds.

Test day was fairly windy – 20 knots from the south-west – right on the beam to our direction of travel. It was also against the current, kicking up a sloppy chop of a metre or so. Given these conditions and a centre console layout, I fully expected to take some spray and got well togged up.

As it turned out, I need not have bothered. We took very little spray and the 16 Centre Console gave an exceptional ride for its size, especially considering that the deadrise is only a modest 15 degrees. This boat is stable, too, and there are no issues involved with standing, or moving around the boat. This is mostly down to the 15-degree deadrise and the use of four- and six-millimetre alloy in the hull construction.

With owner Richie and I onboard, we achieved the performance figures shown in the table on page 141. The maximum revs achieved, 6000, matches Mercury’s ‘book’ maximum, indicating a good prop choice, and 32.5 knots (60.2 kilometres per hour) is a pretty decent top-end speed.

Trailers are a large part of what trailer boats are all about: getting the boat to where the hot fishing is by road, while still allowing the boat to be stored out of the water, safe from bad weather, deterioration in the saltwater environment and mooring fees.

The Ultimate 16CC is carried on a single-axle Enduro trailer, a robust cradle A-frame design with zinc-protected leaf-spring suspension. It features a spare tyre, hydraulic braking, a dual-ratio manual winch, submersible LED trailer lighting, four pairs of wobble rollers (and a keel-entry roller) plus a wind-down jockey wheel. Tow weight of the rig is around 1180kg.

The Ultimate 16 CC is a ‘little big boat’. At just a touch over five metres long and with a two-metre beam, it performs like a much larger craft with a decent ‘presence’ in the water, and dry (for a centre console), stable and soft-travelling performance. The finish and upholstery are exceptional and the use of space and fishing fit-out are excellent. This just may be the best centre console sportfisher of its size that I have encountered. Big ups to Mark Presnall and his team!