As a fishing tool, an inflatable boat can be as good as a kayak, and most enable at least two people to fish in comfort. John Eichelsheim is given the chance to try one such vessel, the Tactician, a very compact and convenient model from True Kit.

True Kit is a New Zealand company that supplies a range of locallydesigned portable inflatable boats, including tenders, sports catamarans, sit-on-top kayaks, and the Tactician series of fishing ‘kayaks’, which I received to play with.

True Kit boats are finished to a high standard and use top-quality Germanmade fabrics, thermo-welded (rather than glued) for greater longevity and durability.

Although True Kit terms the Tactician a ‘kayak,’ it’s more inflatable dinghy than paddle craft. That said, its long, narrow tunnel-style hull, like a kayak’s, is easily driven – but unlike most kayaks, it’s very stable, too.

The Tactician is available in three lengths: 3m, 3.5m and 4m, in grey or camo. Boats are supplied with oars, but a sturdy transom bracket will accept petrol or electric outboards up to 8hp, depending on the model.

Company founder Rod Dawson dropped off a grey 3.5m Tactician for me to try. Although delivered fully inflated on the back of his trailer, it can just as easily be transported on a roof rack if you don’t want to inflate it beside the water.

I asked Rod to deflate the boat and pack it away for easier storage. One bag holds the folded boat and the other the inflatable floor, aluminium seats and oars. He also left me a bag of accessories, including four Railblaza rod-holders for the boat’s Railblaza universal mounts, a drift sock, a good quality hand pump, and a Mercury 3.3hp outboard. Electric pumps are available.

A couple of days later I rendezvoused with Rod, his young son Levi, and a second Tactician at a local beach. I’d pretty much finished setting the boat up when they arrived, unpacking, inflating and rigging it in 20 minutes, including a couple of false steps. I reckon it would take less than half as long once you know what you’re doing (and even quicker using the optional electric pump).

I’d unloaded the boat from the back of my car directly onto the beach beside the water. Two people can easily carry a fully rigged, fully inflated boat, or use a kayak trolley if transporting it some distance to the water is necessary. There are lots of grab handles/straps for use when underway, to carry or hold the boat, or to aid swimmers getting in and out of the water.

While assembling the boat, which is pretty intuitive, I was struck by its good quality fittings and fixtures: valves, rodholders, oars – even the pump. The hull is essentially a long, narrow, U-shaped tube with parallel sides and a solid transom.

The bow tilts up slightly and an inflatable floor fits into the boat, providing the hull with the rigidity required.

The hull tube is divided into three sections, each inflated separately to three pounds per square inch (PSI), at which point they feel quite firm. The separate floor needs to be inflated to around 10 PSI. The floor should be located in the boat and the aluminium cross-seats slipped into their sleeves before the tubes are inflated.

Two-piece oars fit onto Railblaza mounts (which can also take rod holders) on the upper surface of the pontoons. When you’ve finished with the oars, stow them inside the boat, secured against the tubes by retaining straps, and slot another pair of rod holders into the universal mounts.

Provided the tubes are sufficiently inflated, the boat rows well, and I found it was possible to use the oars from either seat, facing forward or aft. Moving from one end of the boat to the other is no drama either, as it’s surprisingly stable despite its narrow beam. The ribbed neoprene surface on the floor gives good footing even when wet – in calm water I could safely stand up and cast.

Rod and Levi’s camo-coloured 4m Tactician was equipped with a 5hp motor and, compared to mine, it got along very nicely, easily planing with two people aboard. I reckon a 3–5hp outboard would easily plane this boat.

It was quite dry, too, though a bit of spray whipped up over the bows in a quartering sea, with the stiff southerly doing its worst (I suspect it would be drier when planing). A bung in the transom allows any water inside the boat to be emptied while  underway.

THE WEATHER on the day we’d chosen, while bright and sunny, was far windier than predicted, restricting us to a relatively small stretch of calm water close inshore. The fishing was underwhelming as a result, which wasn’t really surprising given the number of boats charging to and from the nearby boat ramp.

I managed a couple of small but legal snapper, and one hook-up on a much larger fish in a gut I’d nosed the boat into using the oars. That fish unfortunately busted me off in the rocks after a short run, so the ice in my insulated kayak fish bag went unused.

The session certainly illustrated the value of the True Kit Tactician as a stealthy weapon for shallow-water fishing, though. Petrol power made covering the distances between fishing spots much less tiring on the arms as well. I probably travelled six or eight kilometres in total, eventually pushing around to the exposed side to see if I could improve my success. The run back to the beach at the end of the session took about 20 minutes at near-full throttle.

During the course of the morning I re-filled the motor’s small integral fuel tank just once from the jerry can, more as a precaution than anything. It’s easy enough to do in such a stable boat.

At the end of the session, with the tide all the way in and no way to drive onto the beach, I ran the boat ashore as close to my vehicle as possible. I then emptied out all the gear, unmounted
the engine, and lifted the still inflated boat over the chest-high retaining wall onto the grass beside the carpark. That way I avoided getting sand all over the boat while packing it away. Heavy reinforced strips along the bottom and sides protect the boat’s tubes against damage. 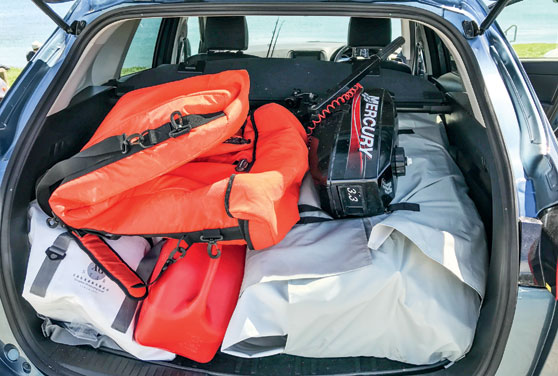 Packing up took very little time, made easier by the bag design: you don’t have to be too fussy about how the boat’s folded to get it into the bag. Both bags, the motor, a spare can of fuel, assorted clothing and fishing gear, fitted into the back of my Mazda CX5 wagon without having to put the seats down, except for the centre section to accommodate the rods.

The True Kit Tactician is a useful fishing boat that’s quick and convenient to deploy, compact enough to fit into the boot of the car (or camper van/motorhome), and sturdy enough to give years of service. For what it is, it handled very well. The rigid floor allows you to safely stand up in it and contributes towards surprisingly good performance in a seaway with almost no hull flexing. Add a small outboard and you have a great one- or two-man fishing boat that won’t break the bank or fill up the driveway at home. 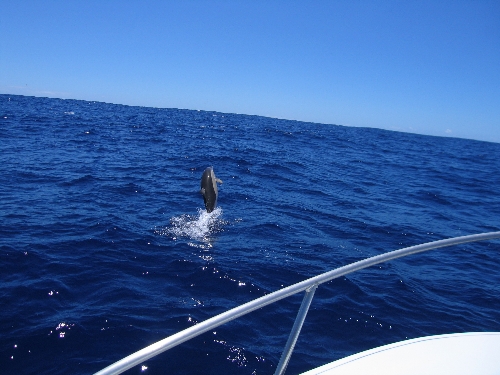