Hearing that Surtees had built a new 650 Game Fisher hull for tackle store chain Top Catch, Sam Mossman joined representatives from both companies to put it through its paces.

When Chris O’Neil, General Manager of the Top Catch chain of fishing tackle stores, went looking in 2018 for a company boat to trial fishing equipment and promote his group, he wanted a hardcore fishing boat. It had to be beamy (lots of cockpit space), with a lockable cabin and rail-enclosed boarding platform to extend the available fishing space, plus have substantial fuel capacity. And finally, he wanted to deal with a ‘one-stop shop’ operation that could organise the build from ‘go to whoa’ so he didn’t have to spend time shuttling the boat around and dealing with different companies over the engine fit up, finish, trailer, electronics and so on.

Meeting Surtees Boats Sales Manager, Isabell Zitzelsberger, at the Auckland Boat Show, he believed he had found the right company and the right boat – the Surtees 650 Game Fisher open back hardtop.

Surtees boats are renowned for their robust construction (featuring six fully welded stringers) and soft ride in rough conditions. This is achieved by using a 20 degree deadrise hull with 5mm bottom, 4mm sides and sealed 4mm treadplate decking that drains to a sump under the transom from where any water is removed by a 2000gph bilge pump. Ordinarily, deep-V hulls tend to be a bit tender and slop around at rest, but Surtees’ clever design gets around this with a flat plate welded above the keel line to form a self-flooding ballast tank which vents out the anchor well.

Holding 300 litres of water (300kg) right on the keel line stabilises the hull at rest, and there is also additional aid from the down-turned chines. The ballast tank self-drains almost instantly as the hull rises onto plane but if extra ballast is required, a gate can be easily closed at the stern, holding the water ballast in the tank and providing a better ride in rough conditions. The hull features a massive 873kg of reserve buoyancy according to Surtees Boats.

The anchoring system features another unique design from company founder Neil Surtees. The ground tackle comes up over the fairlead as usual, but then runs up to an anchor capstan on the outside of the cabin. The bowman sits sideways in the large forward hatch and controls the capstan with a knee switch, passing the warp back forward to the anchor well. Sounds unusual, but as it turns out, this is very practical and comfortable to use. 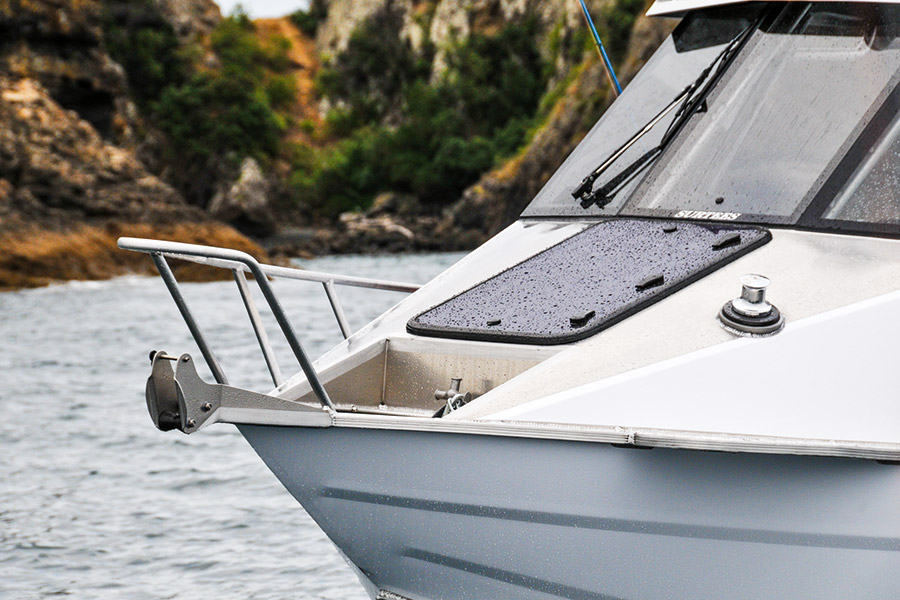 The ground tackle comes up over the fairlead, then runs up to an anchor capstan on the outside of the cabin.

The bow also has a mounting plate for a Watersnake electric trolling motor and adjustments have been made to the design of the bow rail to accommodate it.

The 650 Game Fisher features a forward cabin that will sleep two or three adults at a pinch and has a lockable sliding door for secure gear storage. Stowage space includes under-berth and side shelving.

Out at the helm position the ‘screen is made of toughened 7mm glass. A large dash tray is lined with dark marine carpet, cutting any internal reflection on the ‘screen. Instruments are flush-mounted in the console and include a Garmin GPSMAP 8410sxv MFD, Garmin GMI 20 engine instrument display, Garmin VHF, Fusion sound system, Lectrotab controls and controls for a Marinco searchlight mounted on the hardtop, plus the usual switching which features quality rocker switches. USB ports are fitted for charging and running phones and other devices. 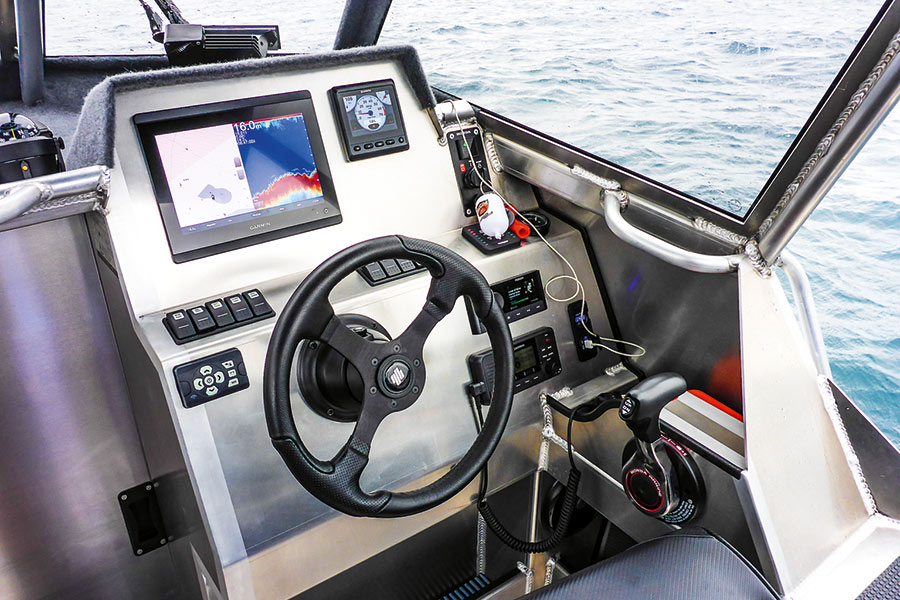 Instruments are neatly flush mounted in the console.

The helm seats are roll-back bolster types on shock absorbing pedestals and the open-back hardtop offers plenty of protection with an extending canvas sunscreen, as well a good selection of grabrails. Footrests for the helm and passenger seat are incorporated into storage racks against the cabin bulkhead with the larger one on the passenger side. Full side shelving extends around both sides of the cockpit and the gunwale tops are covered by Marine Deck Tread panels.

The transom wall design has a locker on the starboard side incorporating the fuel filter and forms a fold-down single bench seat. A central locker houses the dual battery system under a false floor along with a VSR selective charging system. On the port side is a transom step-through with drop door that aligns with the fold down boarding ladder built into the boarding platform cage. A deck wash hose is also fitted. The transom step-through with drop door aligns with the fold-down boarding ladder.

The recommended power for this rig is 115-200hp. The test boat was pushed by a 200hp Honda four-stroke outboard fuelled by a 250-litre underfloor tank. With hydraulic steering, trim tabs, the standard engine tilt-trim and all that horsepower at your command, this boat was a pleasure to helm. We launched at the Takapuna ramp on Auckland’s North Shore at dawn – about the only time you can get a park there – and headed out into the Hauraki Gulf. 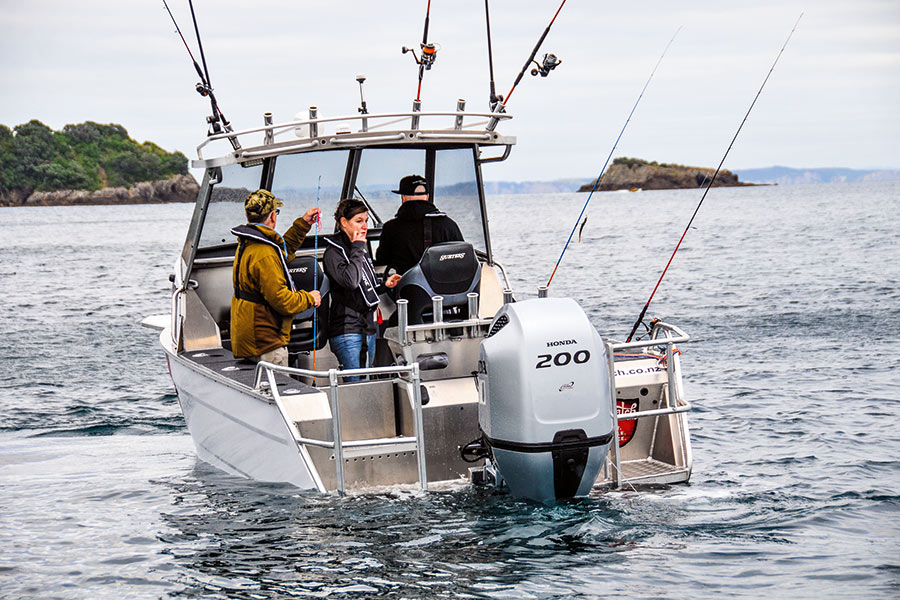 The test boat was pushed by a 200hp Honda four-stroke outboard.

The weather was a bit scruffier than forecast – 15 knots from the west, wind against tide for most of the time. A Surtees belonging to tackle company Composite Developments (Okuma) accompanied us as camera boat. Over the morning, the sea conditions ranged up to a metre of short chop. Unpleasant conditions, but the 650 handled it with ease and comfort, taking little spray and landing softly. We circumnavigated the Noises, stopping to bounce a few lures around for a snapper or two.

The big Honda has plenty of power and on the way home we trialled its performance in the shelter of the Takapuna cliffs. The top speed was 35 knots (65kph) at 5500rpm. The ‘book’ top-end rev range for this engine is 5000-6000rpm, suggesting that the 17-inch pitch prop fitted is a decent match for all-round work.

A promotional boat for a fishing-orientated company like TopCatch is bound to be well fitted out for fishing tasks. Features include: four alloy through-gunwale rod holders with adjacent cup/sinker holders; a livebait tank under the transom drop-door; a six-position rocket launcher up on the hardtop (the outside two are angled to take drop-in outriggers); a ‘deluxe’ bait station on the transom which features five more rod holders, removable cutting board, two storage drawers and a space for a tackle tray; and finally, a pair of four-position internal rod holders. A 'deluxe' bait station on the transom feature five rod holders, cutting board, two storage drawers and space for a tackle tray.

These last holders can be positioned anywhere, hung off the cockpit side shelves, or easily removed to make more space for fishing. Their primary function is rod carrying when under way, keeping the reels away from salt spray.

Catch storage is sorted with an aftermarket ice bin and as it’s such a beamy boat, we carried a bin that would easily take several decent sized kingfish, full length. 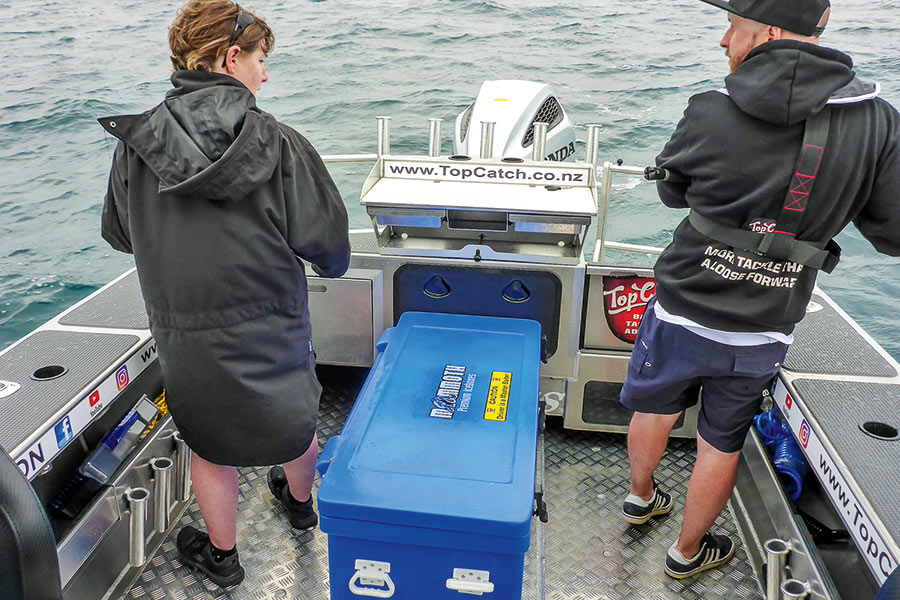 Catch storage is sorted with an aftermarket ice bin.

Isabell and Chris threw some soft-baits and slider-type lures around (while I made notes for this review), catching a bunch of pannie snapper. Despite the sloppy conditions, fishing was hassle-free thanks to the stability imparted by the Surtees ballast system.

On the road again

Surtees sourced the trailer for the 650 from allied company Epic Trailers (formerly known as Surtees Trailers). This is a galvanised, cradle A-frame, tandem-axle design with six pairs of wobble rollers per side. Features include: guide bars, hydraulic brakes, spare wheel, wind-down jockey wheel, submersible LED lights and leaf-spring suspension. The tow weight of the rig is around 1690kg. 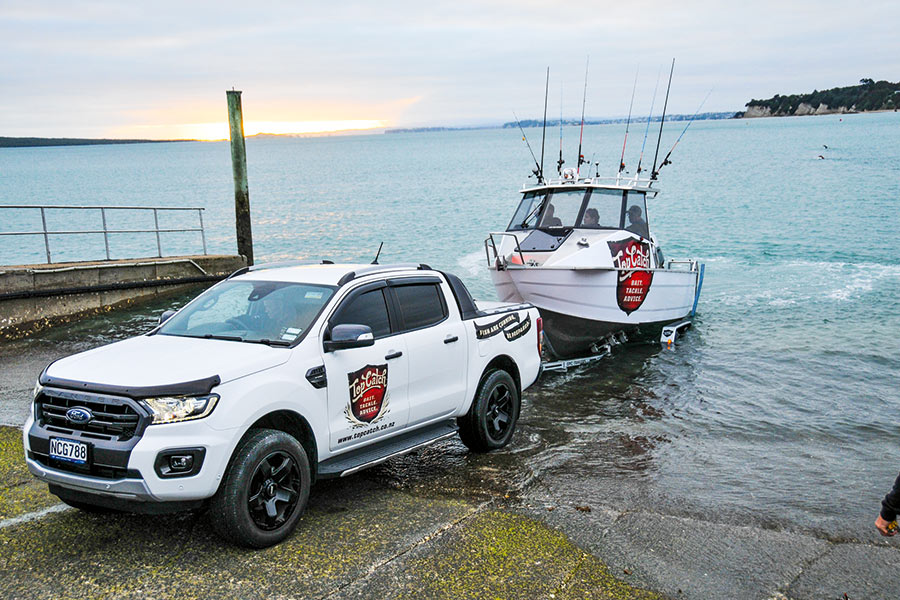 The tow weight of the rig is around 1690kg, easily handled by the TopCatch Ford Ranger.

Also fitted is Surtees’ clever bow catcher, allowing the boat to be driven onto the trailer and automatically locked in place, greatly simplifying launching and retrieval.

In addition to the above features, Surtees have a huge range of layout options that are geared towards comfort, fishing and safety. It was noticeable that TopCatch had taken the full list of safety options, including EPIRB and multiple extinguishers. Robustly built with a heap of reserve buoyancy and a high level of finish, the 650 Game Fisher is great traveller, stable and with a lot of clever design ideas built in. This mid-range trailer boat is a great choice for fishers. Steve and Pete on tour with Marty - Far north