A chance read of the first Stryda 600 review in a three-year-old NZ Fishing News magazine in a waiting room was the catalyst for Northland’s Doug and Lenore Donaldson to initiate the construction of their own amphibious boat, writes Grant Dixon.

The Donaldson’s recently took ownership of the Stryda 600 appropriately named Wheelie Special which is now domiciled at their Rangiputa holiday home.

Wheelie Special varies a little from the boat featured in the initial review. The most significant change is the creation of ‘clip-on’ coamings, where nicely engineered higher sides can be added once the main construction is completed. 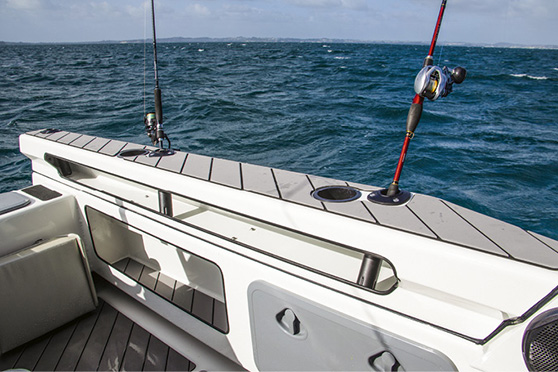 The clip-on gunwale is an innovation that allows owners to choose between two gunwale heights depending on their needs.

“The lower gunwales of the original model are popular with game fishers, but those with families, or in the case of the Donaldsons – grandchildren – want higher sides. The clip-ons, which are bolted in place, was a simple but effective fix,” says Stryda Marine’s Warren Farr.

Another addition to this boat is the ZipWake trim system which automatically controls pitch and roll using actuator blades in the place of traditional tabs.

“The system is awesome. You can programme in your own parameters and the ZipWake sets the boat’s trim according to these and the sea state at the time.”

“Another feature is the system’s quick response to any changes. Basically, you just set and forget.”

At the heart of the boat is the Orion 4WD amphibious drive system which has a Programmable Logic Controller (PLC). This incorporates ‘smart’ features such as anti-stall; ‘smart’ brakes; and self-diagnostics. The system also has unlimited run time and won’t overheat. Fuel capacity is the only limiting factor! 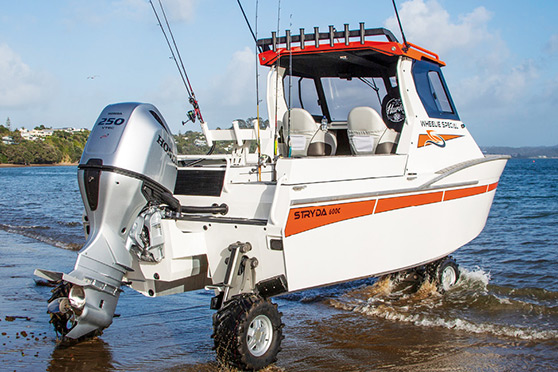 Being able to 'drive' to and from the water has many advantages.

The Stryda is the first four-wheel-drive amphibious boat in the country. The four-wheel models have an advantage over the three-wheel models as they have more torque spread over more driving wheels, reducing the ground pressure on each wheel. It is a case of ‘No ramp? No worries?’ or as Warren puts it – “more beach within reach”.

The Orion drive requires servicing just once a year. The system is marine anodised with Tuff Kote to prevent corrosion. The hydraulic motor is housed in a compartment at the rear of the cockpit, which also doubles as extra seating, with rod holders around the sides and a removable baitboard on top.

There is seating for six, including two Shark sprung seats for the helmsman and navigator and two rear drop-down dickey seats either side of the hydraulics box. Two Shark hydraulic seats make for a comfortable ride for the skipper and the navigator.

Good use has been made of space with storage wherever practical. The batteries are housed in their own compartment accessed by a hatch in the port gunwale. The fire extinguisher even has its own ‘cupboard’ where it is easily accessed and protected from the elements. There is the traditional gunwale storage shelving, not long enough for a rod, but perfect for all those other bits and pieces it is good to have close at hand. More storage can be found in the gunwale clip-ons.

There is a bunk area up forward, and the ground tackle is handled by a LoneStar GX2 drum winch which Warren suggests is “the best of its type out there.”

A Garmin 12” plotter/sounder has pride of place in the helm fascia, above which is the engine management system for the 250HP Honda bolted to the transom. Fuel capacity is 200 litres, but with the Honda’s reputation as a fuel miser, Doug has all the range he needs. The well laid out helm station is dominated by a 12' Garmin sounder/plotter.

Other electronics and helm features are the ZipWake controller, capstan switch, Garmin 115i VHF and a Fusion marine stereo, plus the myriad of switches a boat this size needs. All are well laid out and in easy reach of the skipper.

Fishing features include a removable bait board and a decent livebait tank, the latter set into the port side of the transom. There is no shortage of rod holders. There are two removable sets either side of the hydraulics box, conventional holders in the gunwales, more across the back of the bait board and if that is not enough, there are seven spaces in the rocket launcher in the cabin top. 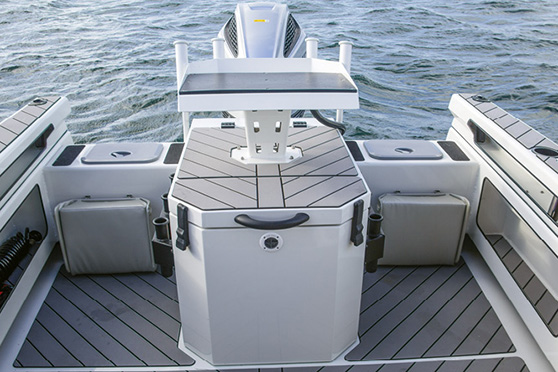 Although dominated by the Orion's hydraulic system, there is a surprisingly good amount of fishing space in the cockpit.

The cockpit floor and gunwales are covered extensively in Ultralon decking, a hard-wearing product that is comfortable underfoot.

An alternative to trailer beach launching

When Lenore came out from seeing the Auckland eye specialist, Doug told her ‘I’ve just found our next boat’ – and he was serious. He had been reading the NZ Fishing News’ January 2016 edition in the waiting room, which featured a review of one of the first Stryda 600’s to be built.

On their way north, they called in at Stryda Marine, and the scene was set. Unfortunately, they had to wait until some extended litigation over the amphibious system was resolved through the courts before taking delivery.

“At 78, I was over conventional beach launching and while Rangiputa has a nice firm sand base, when a north-westerly in particular springs up, it was not easy for Lenore and I to get the boat on the trailer. We usually ended up soaked!” Doug says.

They are both rapt with the boat which Doug can now launch by himself without getting his feet wet.

Doug says he has welcomed the addition of the clip-on gunwales, adding that extra element of safety with young ones on board.

As to the boat’s performance, Doug could not be happier. He has had it out in some rough conditions and has not found either the boat or the motor wanting in any aspect.

“We have enjoyed working with Warren and his team at Stryda Marine. They were easy to deal with, listened to what we wanted and set about creating what for us is a perfect boat for our situation.”

I reacquainted myself with the Stryda 600 at the Stanmore Bay boat ramp, having previously run it off Waipu Cove surf beach.

It was good to see the subtle refinements made, the clip-on gunwale option being the most significant. It was not until Warren pointed them out that I realised they were an option, so tidy was the engineering.

Stryda is currently working on the design of the transom to eliminate completely the cavitation single-engine powered catamarans all seem to suffer from to various degrees.

I was impressed by the boat and its special capabilities when I first jumped on board three years ago, and nothing has been done to change that opinion, only enhance it.