Most New Zealand boaties will have heard of Sealegs, the amphibious boats designed and built here in New Zealand. The concept came as a solution to a problem. Founder Maurice Bryham lived on Milford Beach in Auckland but despite his proximity to the sea, he was frustrated by the time and effort it took to launch and retrieve his boat.

Back in 2001, inspiration struck and a prototype was built. Using patented amphibious technology, he produced a boat with integral powered wheels that could be raised once the boat was in the water, allowing it to function like a traditional powerboat. Three years after that, the Sealegs company was up and running and Bryham, along with co-founder David McKee Wright, had the first production models rolling out of the factory.

Today, sixteen years later, Sealegs makes a wide range of models, including alloy and inflatable pontoon types. Since its’ inception, the Auckland factory has turned out over 1500 Sealegs boats that, as well as supplying the domestic market, have been exported to 55 countries. The company is happy to customise rigs for specific uses and maintains dedicated sales offices in Australia and the USA (in addition to many other agents and distributors), with over 75 staff in NZ and plans to employ another 5-10 in the near future. A true Kiwi international success story.

The basic concept sees retractable wheels installed on the bow and the stern corners. An internal engine powers a hydraulic pump that raises and lowers the large All Terrain-Vehicle wheels and powers them when required. When you want to ‘park’ the boat on shore, the wheels can be retracted for easier boarding and unloading. On the water, after the wheels are retracted, the Sealegs is driven by a conventional outboard engine.

Some of the benefits of this system are obvious: a single person can easily launch and retrieve without the need to organise a crew, no queues at boat ramps, no backing trailers and no winching or trailer parking issues to deal with. There are also no tidal limitations on launching, embarking and disembarking is faster, safer and more comfortable and it is possible to access and explore places that are inaccessible in a traditional boat. Feel like a break, picnic or a swim? Drive up on a handy beach! 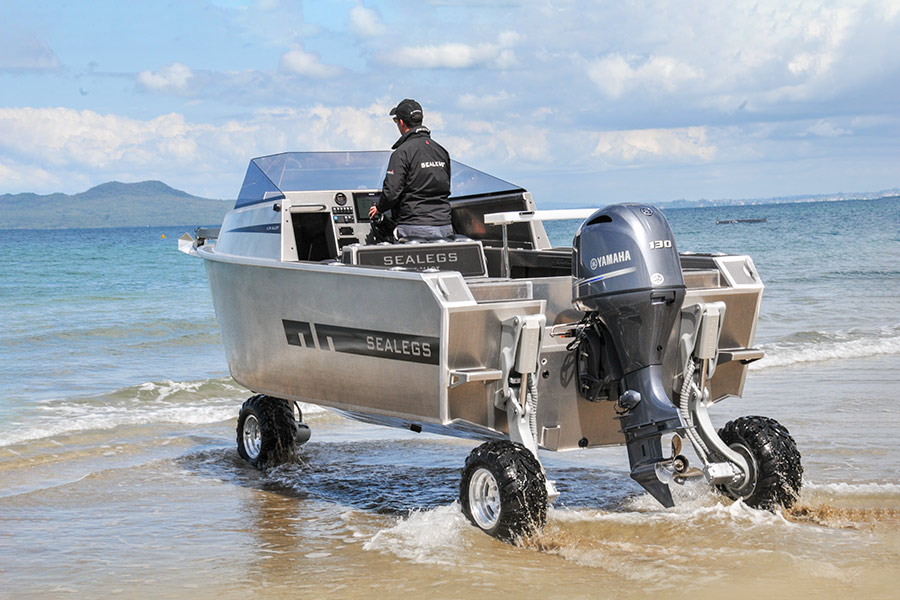 A single person can easily launch and retrieve the boat.

Sealegs’ latest design is their 6.1m Alloy, a rig that is aimed squarely at the coastal fishing market. Built from 4mm alloy, it features a 19-degree deadrise hull. The on-land engine is a 22hp Honda twin-cylinder motor that is mounted under the seating unit. This powers the hydraulic pump which, in turn, raises, lowers and drives the large all-terrain vehicle wheels. On-land, the Sealegs has about ten minutes of run time, or 30 minutes if the optional extended run system is fitted. It can climb an angle of 14 degrees and is available in two-wheel drive or can be fitted with an optional diff lock that provides all-wheel drive capability (as the test boat was).

A rocker switch system raises and lowers the wheels, a gear-and-throttle lever controls the forward and reverse driving, a second throttle controls the engine revs and there is an emergency brake button too. The wheels are completely clear of the water when retracted, so there is no additional drag when underway. 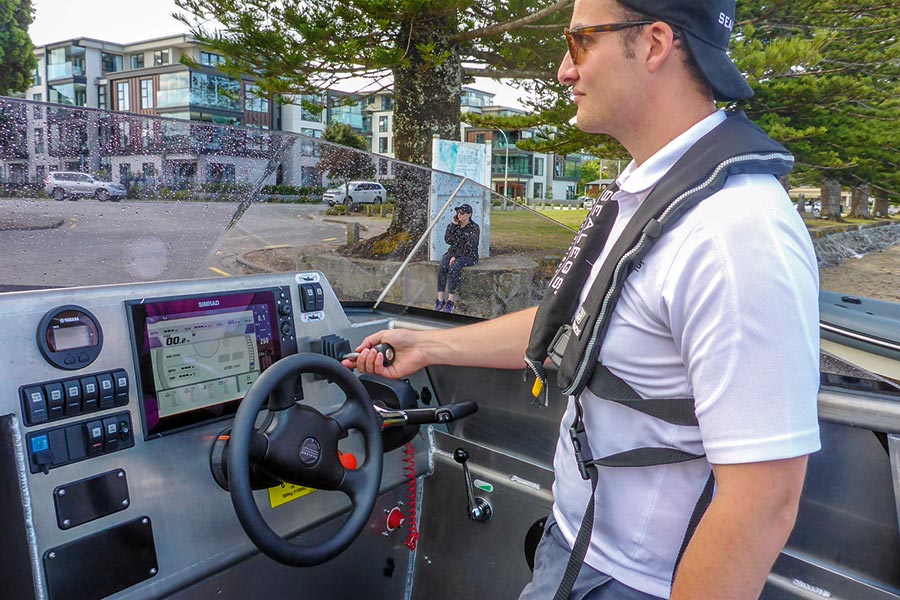 A rocker switch system will raise and lower the wheels, a gear-and-throttle lever controls the forward and reverse driving, a second throttle controls the engine revs and there is an emergency brake button too.

Electronics include a Simrad NSS Evo 3 multi-function display with GPS and sounder. Other options are available. The decking is custom black/grey U-Dek and covers the foredeck, gunwales and cockpit floor, which provides good footing and looks smart.

The hull is a large volume, high-sided design to support the extra weight of the amphibian equipment. To a casual observer, the bow looks a little stubby but this is only because of the space left at the pointy end to recess the bow wheel into. For the same reason, the bow sprit/fairlead is extended to allow normal anchoring function past the bow wheel. The anchor winch fitted is a drum-type Savwinch mounted on the foredeck.

The windscreen is polycarbonate and the design on this pre-production model was still being refined. The finished model will be one-piece and curved, and set a little further forward to match up nicely with the optional stainless T-top that Manta Marine are producing for this boat. It will take down for storage and features a canvas top, clears and a six-position rocket launcher. Manta are also producing a stainless bait station for the transom. Sealegs likes to use local suppliers whenever possible; the wiring loom is made by Connex, for example. 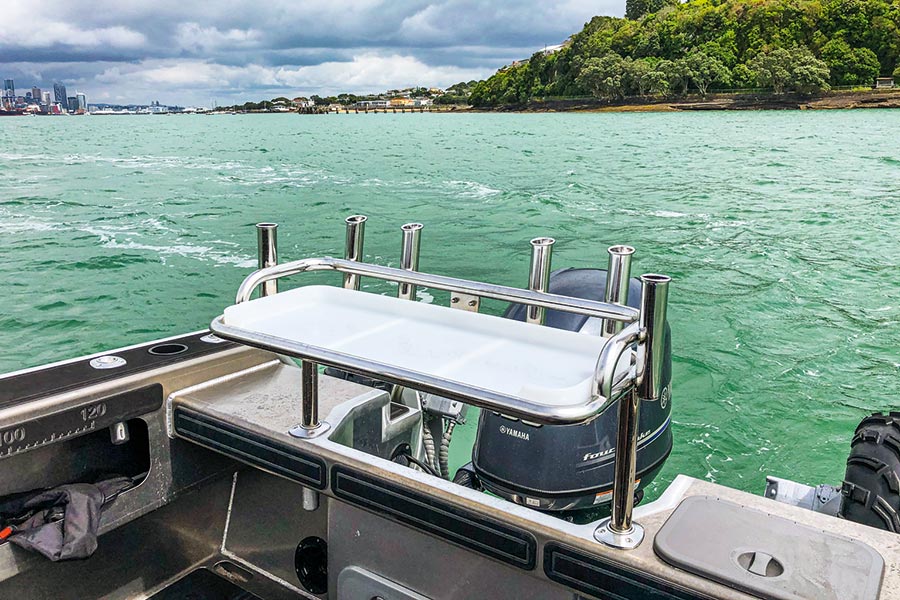 The new bait station made for the 6.1m by Manta Marine.

The 6.1 Alloy is set up to be a day-fisher so the forecabin has no space wasted with berths but there is stowage space, side shelves and housing for the battery (a dual battery system is an option). The side shelving theme is continued around the cockpit sides and supplemented by a locker in the central transom which also gives access to the 500gph bilge pump. 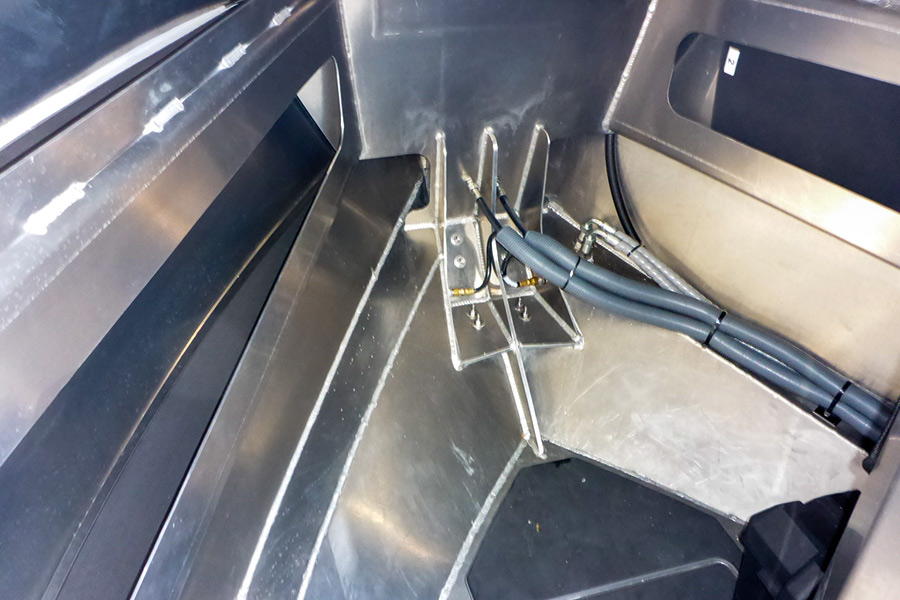 As a day fisher, the forecabin has no space wasted with berths.

The Honda engine that powers the hydraulic amphibian system is housed inside a central engine box that doubles as seating with two single forward-facing fold down bolster seats (no back rests) and a rear-facing bench seat/work-top. Footrests for the forward-facing seats extend back off the forecabin bulkhead. 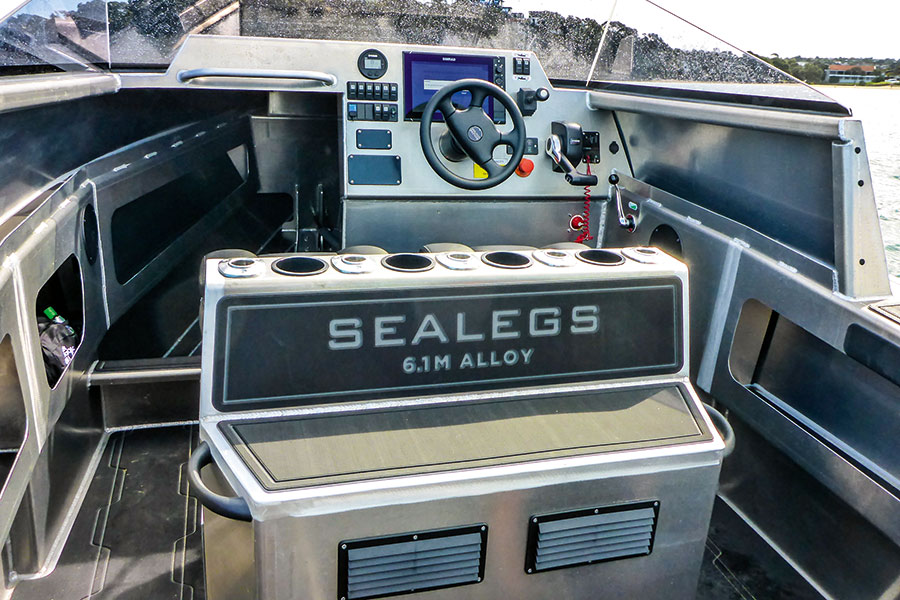 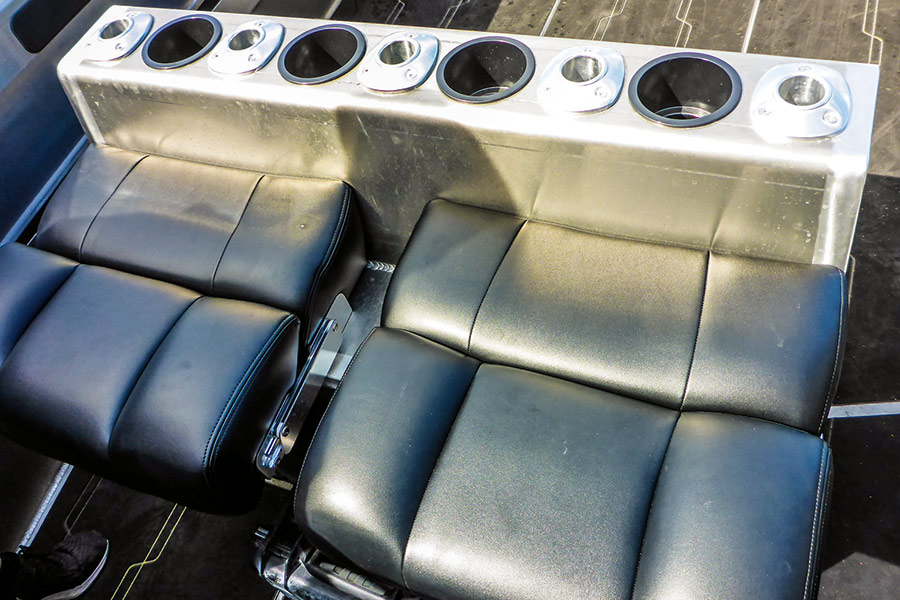 Boarding the boat can be achieved by stepping up on the rear wheel assembly, and then using the several steps fitted on the transom (the side of the bait station doubles as a grab rail). The rear wheels’ hydraulics can even be used as an elevator to lift swimmers and divers aboard, I am told!

The test boat and camera boat were at Browns Bay on Auckland’s North Shore when I arrived. It was a simple matter to step aboard over the gunwale, after which Sealegs’ Jack Ewen fired up the 6.1, extended the legs and drove the boat over the sand and through the surf until it was floating. The wheels were retracted, the outboard fired up and away it went! Peter Small drove the camera boat, a large inflatable Sealegs.

When in aquatic mode, the rig is powered by a 130hp Yamaha Four Stroke outboard turning a 16-inch diameter prop with a pitch of 13 and 1/8”. This can push the boat to over 30 knots; a good effort considering the extra weight that the rig carries with the second engine, wheels, etc. The best cruising speed is at around 4000rpm which equates to about 20 knots (37kph) and a fuel burn around a litre per nautical mile. The 6.1 is designed to take one or two 45 litre tote tanks in a hold under the cockpit deck, giving a maximum range of around 90 nautical miles.

With Seastar hydraulic steering, the boat handled well and there was no shortage of power. Yamaha were still working with Sealegs to sort out the best prop and engine height for the rig and supplied the performance figures on page 97 a couple of days after I had a run the boat.

Features for fishermen include six alloy through-gunwale rod holders with movable gimble pins and four cup holders, a six-position rocket launcher on the optional bimini top, a mackerel-sized livebait tank set into the transom, and a stainless framed bait station centrally mounted on the transom with six more rod holders. A further five rod holders and four cup holders are set across the engine box/helm seat. With the addition of an after-market ice bin, this rig should be able to handle most coastal fishing tasks with ease – just take appropriate care when fishing around the rear wheel assemblies. 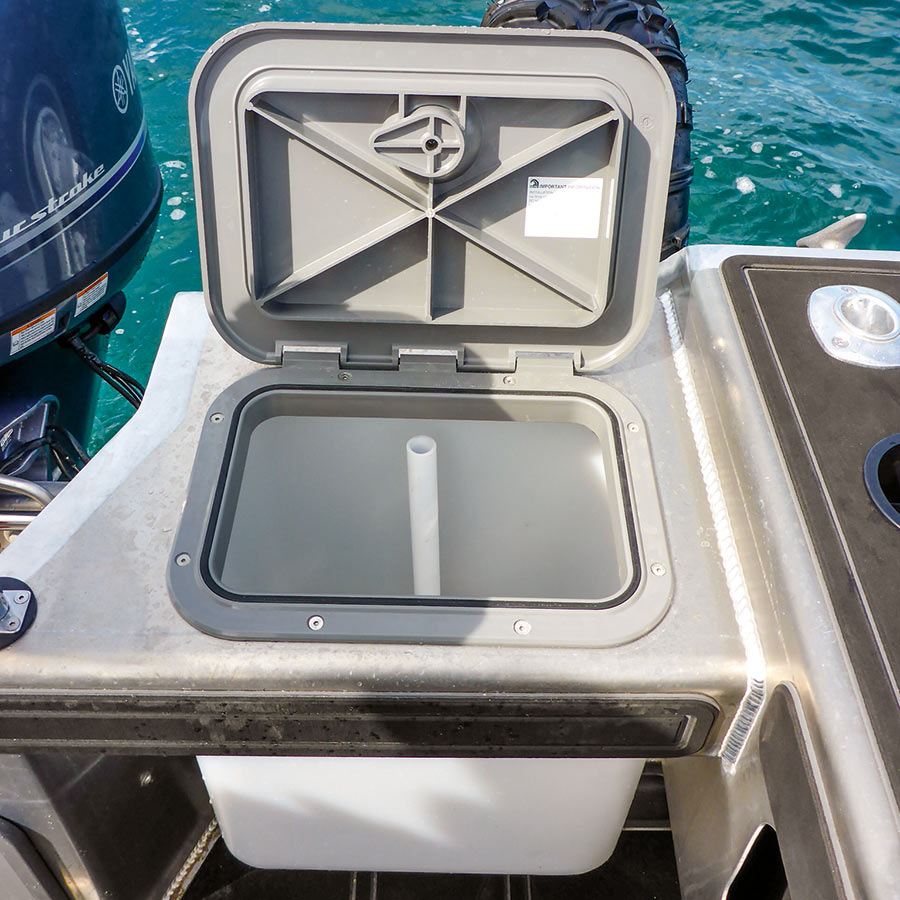 The amphibious technology adds to the cost of the rig, but if you are within a reasonable distance of your launch point you won’t need to buy a road trailer and surely this scenario is the main reason for investing in the Sealegs system.

I have already mentioned the big advantage of quick, easy solo launching anywhere you can get beach access. If you want to transport the Sealegs 6.1m Alloy further afield before taking to the water, a Hosking trailer that fits the boat is available. The tow weight of the rig on its road trailer is about 2.2 tonnes. 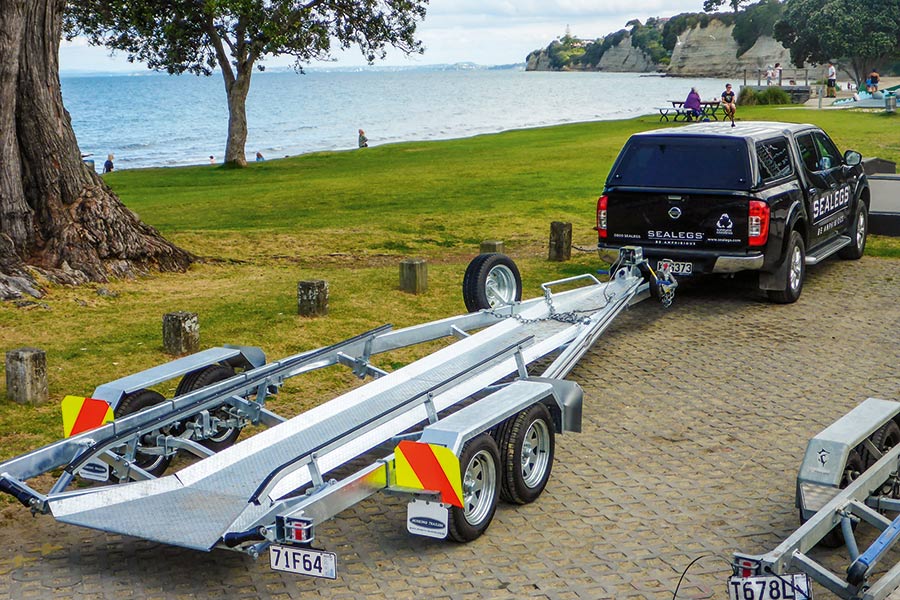 To transport the Sealegs further afield, a Hosking trailer that fits the boat is available.

The Sealegs 6.1m Alloy is designed and engineered to be a cost-effective coastal fishing boat, with all the added benefits of the amphibious capabilities: easily solo launching; no queues at the ramp; no backing or parking trailers; no winching; no tidal limitations on launching; and easy embarking and disembarking.

Of course, all this clever technology comes at a price, but Sealegs have designed this boat to keep construction costs to a minimum. And let’s face it, if you can afford a house near the beach, cost is probably not an issue in return for quick and easy boating and fishing.

On water: (figures supplied by Yamaha) 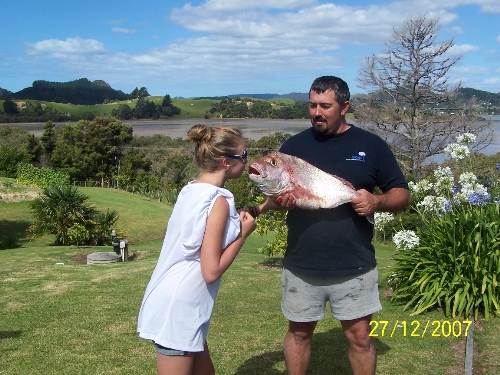 A new friend for my Daughter - Whangaroa