Australian boat builder Quintrex is a company with history. Founded by Terry Quantrill and Arthur Arnold way back in 1945, it became one of the pioneers of Australian aluminium boat building. The company learned to ‘stretch form’ aluminium sheet into complex curves, allowing the development of alloy boats with superior ride capabilities that saw them leading the pack. Seventy-five years later, the Gold Coast factory employs 270 workers and is one of Australia’s most prolific boat manufacturers, producing over 80 different models. New Zealand Quintrex agents Family Boats invited Sam Mossman to trial the fishing-oriented 460 Renegade Side Console.

Over the years I have had quite a bit to do with Quintrex hulls, testing seven previous models. New Zealand Fishing News has run a couple of Quintrex ‘project boats’ as well. They have all impressed with their smooth, dry rides, especially considering that these hulls tend to be built from lighter gauge aluminium than commonly used in New Zealand.

The test boat, the 460 Renegade, is around the middle size of the Renegade range and features their ‘Blade’ hull which has an increased deadrise, sharper entry and narrower shoulders at the bow than its predecessor. It is said to cut through swells more easily and deliver a smoother ride. The blade hull is also reputed to disperse spray further aft, making for a dryer ride. The 460 hull is built from 3mmr alloy, while a typical Kiwi build of this size would be in 4mm.

I met up with Family Boats’ sales and marketing manager, Todd Marsh, at Auckland’s Half Moon Bay ramp where we popped the 460 Renegade into the tide. It was the SC (side console) variant, looking smart in a white paint job with decals and powered by a 60hp Yamaha four-stroke outboard swinging a 13” pitch prop. With flared bow, press-formed strakes, and high sides, it looked to be a very sea-worthy craft.

Starting from the pointy end, the 460 features a short bow sprit and open tray-type anchor well of moderate capacity with a tie-off cleat behind. The bow rails are asymmetric, allowing for a Minn Kota Riptide Powerdrive iPilot electric fishing motor, the 54lb thrust model. This has a remote control and a separate battery which is stored in a hold under the forward platform. The Minn Kota’s battery is rigged back to the main engine and battery (which is sited at deck level under the transom) with a selective charging system. 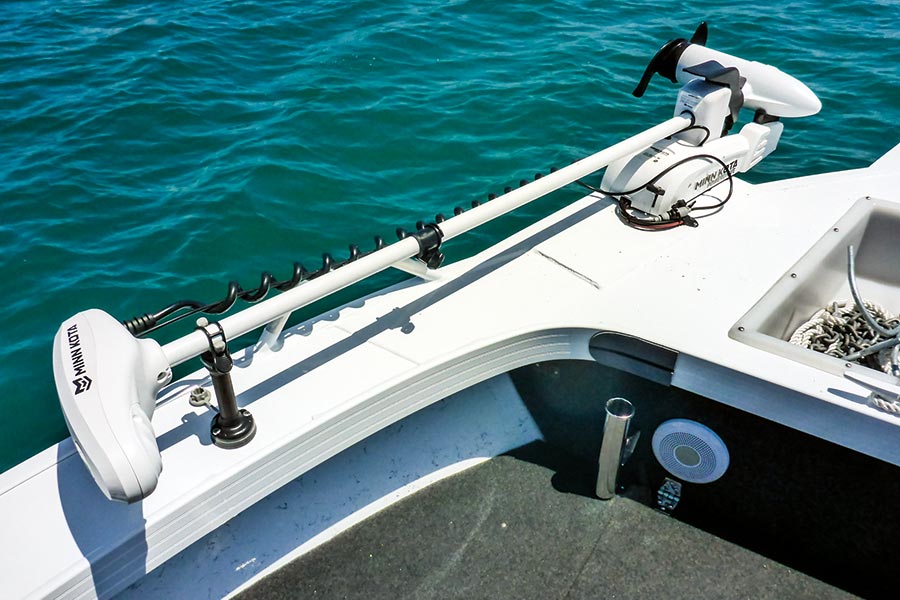 This boat is configured as a side console, with the helm position about halfway back from the bow and on the starboard side. The bow features a large casting platform with three fold-down removable pedestal seats (two is standard) in the cockpit, and extra grab rails. The raised forward platform has stowage space underneath, accessed by four separate hatches. One houses the Minn Kota battery system, one has a livebait tank (which we will come to later) and two are general stowage. The decking is marine carpet, right through. The bow features a large casting platform with three fold-down removable pedestal seats in the cockpit. The side console is set on the starboard side with stowage room beneath and up in the console.

The side console is set on the starboard side with stowage room beneath and up in the console itself. Electrics include two USB ports and a 12-volt outlet, a 7” Lowrance Elite Ti2 sounder/GPS, Fusion MS-RA 70N sound system and a GME GX750 ‘Black Box’ VHF (the controls are all fitted in the handpiece). Remotes and steering for the 60hp Yamaha are cable. An EPIRB is easily accessed from its mounting on the side of the console. A pair of fold-up drink holders have also been added. Fitted to the test boat, but removed for the photo shoot, is a bimini top that mounts on the gunwales. It gets in the way a bit when fishing with long rods but can be easily folded down (or removed completely) and is a useful bit of kit during the hot days of summer, especially with the family aboard.

Stowage is supplemented by side shelving in the cockpit. A pole-mounted riding light is carried under the gunwales and mounts in a gunwale fitting. The deck drains to a sump under the transom and water is drained by an automatic bilge pump. A deck wash hose is fitted, and over the transom on the port side is a boarding platform with a fold-down stainless boarding ladder.

As it has been for most of the summer, it was blowing around 10-12 knots from the NE with around a half-metre of chop when we left the Tamaki Estuary. The Renegade handled the conditions very well, providing a soft and very dry ride, living up to Quintrex’s claims. The instruments were not set up to give full performance figures but powered with a 60hp Yamaha four-stroke (this model is rated to 75hp max) turning a 13” pitch prop, the test boat achieved 26 knots (48kph) with two adults and a bit of gear aboard. Fiddling with prop, trim, etc would probably see a maximum speed of around 30 knots (56kph). Fuel capacity is 77 litres in an underfloor tank. 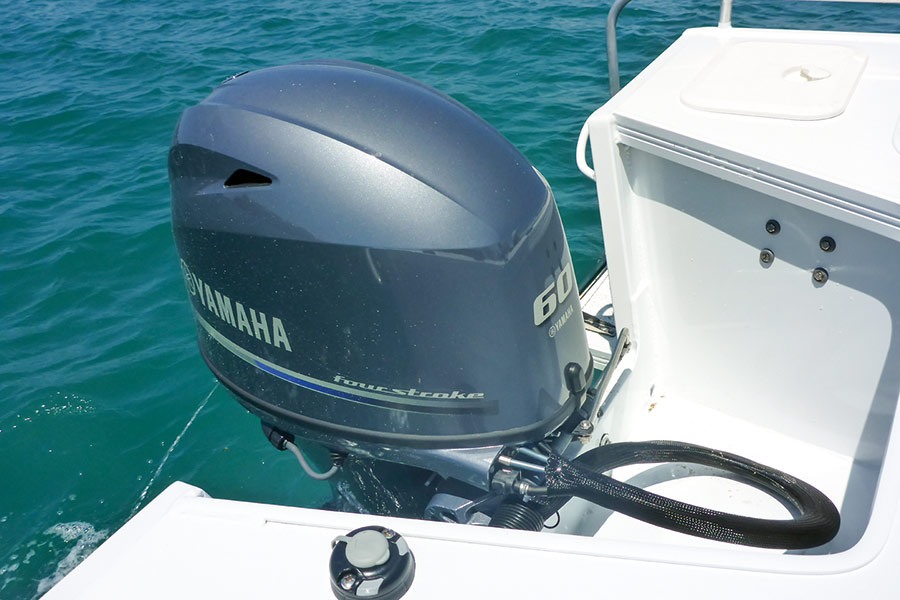 Although rated for 75hp, the test boat was happily powered by a 60hp Yamaha.

As mentioned, the Renegade range is designed for fishing. The bow platform has good footing with the marine carpet, and two rod holders are fitted on the forward bulkhead to take a U-shaped stainless pipe rail, providing extra support for a standing angler casting topwater lures, soft-baits, flies or other lures. This is ideal if conditions are sloppy or you (like me) don’t have a great sense of balance. Two rod holders are fitted on the forward bulkhead to take a U-shaped stainless pipe rail providing extra support for a standing angler.

Six through-gunwale rod holders are fitted around the sides, with two sets of three ‘carry’ holders set along the rear of the casting platform – a good position to stash the rods while under way. In addition, there are at least two pairs of Railblaza’s Starport mounts that provide alternative positions for bait boards or Railblaza’s rod holders and other fittings. These were added in New Zealand, but there is an alternative mount for a Quintrex-designed bait board at the centre of the transom. 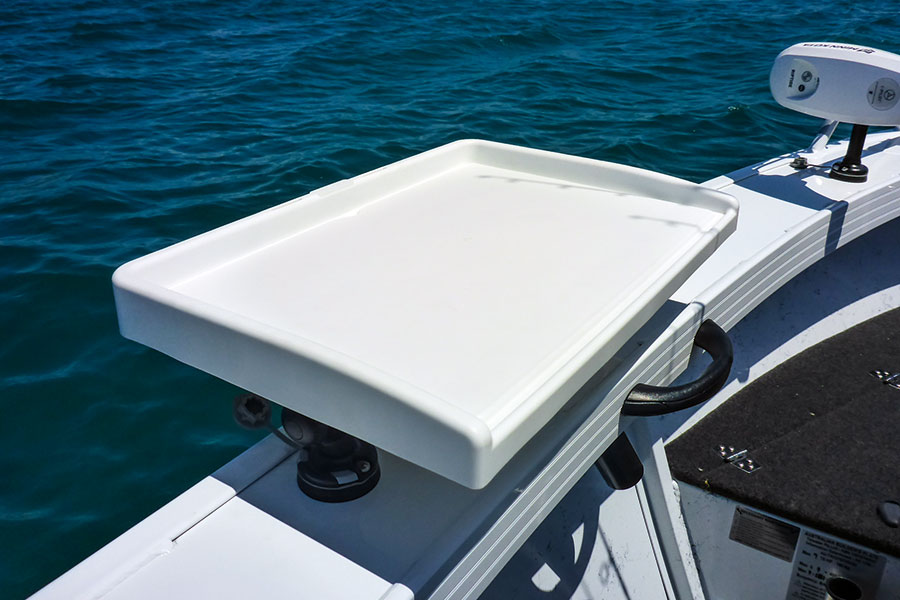 The use of Railblaza Starports allows several options for mounting bait boards.

Likewise, livebaiters are spoiled for choice. There is a mackerel-sized tank in the transom wall, and a larger tank is built into the forward platform. The latter is designed with a removable divider that separates the tank into two halves while maintaining water circulation.

The single-axle trailer was built by Quintrex in Australia and is an interesting mix of aluminium and galvanised steel I-beams. Loading the boat is aided by six keel rollers and three pairs of skids. The boat is supported by a pair of benches. 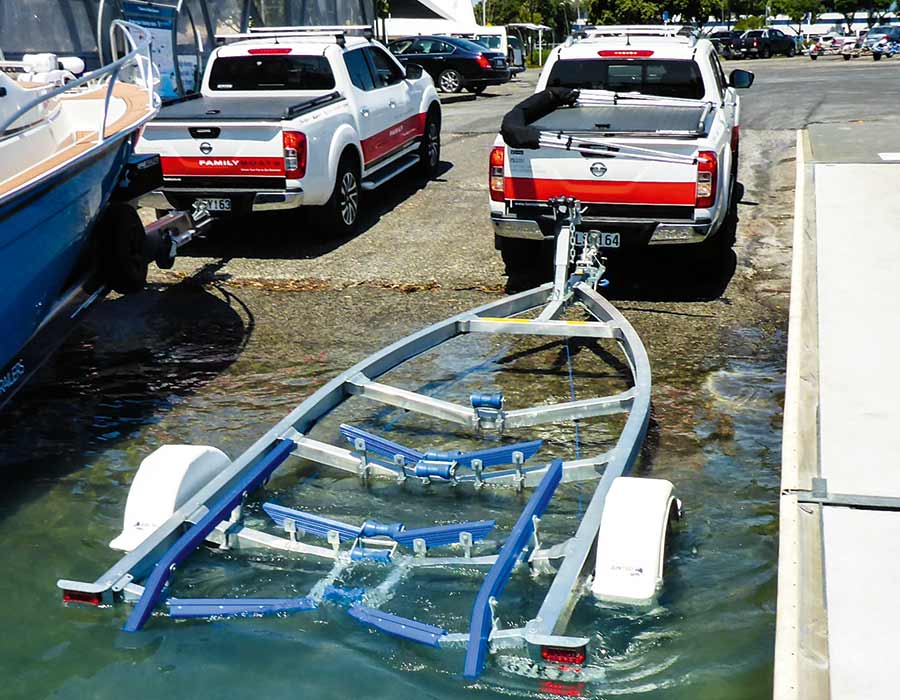 Loading is aided by six keel rollers and three pairs of skids.

Suspension is leaf spring and manual parking brakes are fitted. Other features include submersible lights, a wind down jockey wheel, manual winch, mag wheels and fibreglass wheel arches. The tow weight of the rig is approximately 800kg.

The Quintrex Renegade 460 is an ideal boat for coastal and freshwater sportfishing, especially for lure fishing enthusiasts who are well catered for with the forward casting platform, removable support bar and Minn Kota electric outboard. Livebaiters have two tanks to choose from and those wanting to fish baits have three bait station options available.

A smart-looking boat that performs well, rides comfortably, and is well kitted out for fishing. What more could you want?

in The Briny Bar
42 minutes ago