It is good to see a company moving ahead, especially in provincial New Zealand.

Firmans has recently appointed the Powerboat Centre in Christchurch as its South Island dealer, and is also looking to the large Auckland market, initially renting showroom space at Sports Marine in Ti Rakau Drive to display Profile boats and give them some more exposure there.

Another recent move has been to appoint Hunts Marine in Sydney as their first Australian dealer. This Aussie firm has three branches in Sydney and has already received its first shipment of Profile boats. Profile has developed removable rocket launchers especially so its craft can fit snugly in a container.

While in Napier I took the opportunity to take one of Profile’s 600H models for a test run in Hawkes Bay. Brian Firman, his lady Tracy and I launched the six-metre craft from the Hawkes Bay Sports Fishing Club’s ramp at Ahuriri a few days after Christmas.

The Profile 600H is carried on a tandem-axle DMW trailer with zinc-protected leaf-spring suspension. It is a galvanised cradle A-frame design with six pairs of wobble rollers per side, metal wheel guards, keel entry roller, wind-down jockey wheel, submersible LED lights, dual-ratio manual winch, and metal guards. Launching and retrieving is so free that Brian uses a quickrelease cord to prevent the boat from running away while the hook and safety chain are being removed. Tow weight is around 1550kg – pretty reasonable for a 6m boat.

Even at 7:00am there were plenty of trailers in the park, despite the fishing being tough down in the Bay in recent years.

After a photo shoot just off Port Napier we headed out past the breakwater, bound for the area of foul around Black Reef.

Once we came out of the port’s lee it was plain that conditions were not quite as forecast, with 10-15 knots of SW wind combining with the long-shore coastal currents and an incoming easterly swell to kick up a confused, steep chop of around 1.5m. It was basically a messy head-sea all the way across the bay, one of the most unpleasant scenarios for travelling in a trailer boat.

This is where the Profile design showed its class. The pontoons give the hull stability, while the 18-degree deadrise, rising sheerline and the tapering of the pontoons toward the bow avoid hammering, yet retain plenty of lift in the nose. The three pontoon chambers and sealed under-deck section provide significant reserve buoyancy and give plenty of that valuable commodity – peace of mind. 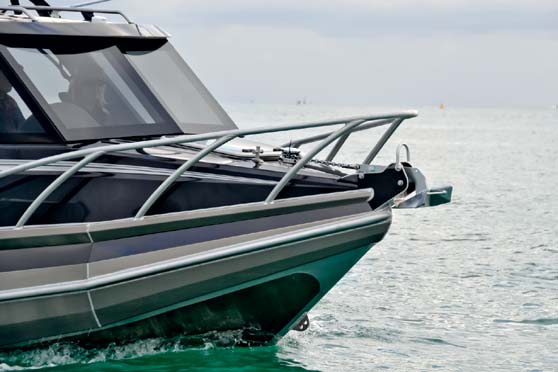 The pontoons are constructed from 3mm aluminium and are protected by a fending rail. The hull has a 5mm bottom. Recommended power ranges from 115-175hp. The test boat was fitted with a Mercury 135hp four-stroke outboard swinging a 17-inch pitch prop. It is rated for up to seven adults.

Even in the poor conditions we had a reasonably comfortable ride at around 15 knots, with no harsh pounding, while the open-backed hardtop configuration kept us dry. It was not possible to run up to top speed, but Firmans supplied the performance figures hereabouts, recorded when the engine was fitted.

After fishing around the Black Reef (Cape Kidnappers) region for a while, we travelled back north and further offshore to try an area known locally as The Springs, before travelling back to Napier with a more or less following sea. While we were never exactly comfortable, in the days when I was growing up fishing in the Bay, we would have considered this a huge trip, and despite the sloppy sea, the 600H handled the trip easily on a day when you would have stayed home in a lesser boat.

At the spots where we stopped to wet a line, we fished at anchor in depths between 15 and 40 metres. Anchoring is the normal practice in Hawkes Bay, so decent ground tackle is important. In this case the anchor is permanently mounted on the bow, lowered and raised using a Maxwell capstan, controlled from the helm, that feeds through the foredeck into an anchor well. This worked well, as I could see the anchor going down on the Simrad Go7 touchscreen sounder/GPS, so knew when to stop paying out the warp.

For those wanting a manual anchoring system, the best option is to work through the hatch in the cabin roof, which has a treadplate platform in the front of the cabin for the bowman to stand on. The bow can also be reached around the cabin sides; non-skid panels and substantial bow rails help increase security. There is a crucifix bollard for tie-off duties.

The open-entry forecabin was set up as a day boat, with squab seats providing stowage space underneath, along with narrow but deep side shelves. Adults may find it a little snug, but options such as berth in-fills and extended berths and toilet are available. The large polycarbonate roof hatch lets in plenty of light and a hinged swing door gives access into the console’s rear. 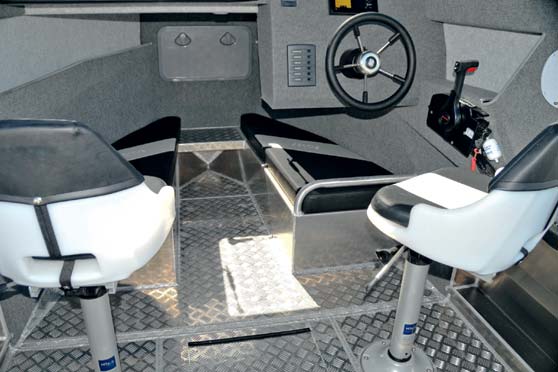 Sealed treadplate decking runs from the bow to the transom. Between the helm seats is an under-deck storage hold with a flush hinge for the hatch, which can be drained via a pipe to the stern of the boat. The decks drain to a sump under the transom wall which is, in turn, drained by an 1100gph bilge pump.

The helm seats themselves are upholstered plastic bucket seats on Softrider pedestals with swivel, slide and height adjustments, but other seating options are also available.

All-round visibility is good through fixed toughened glass windows, and a decent-sized dash has a rear lip, is lined with dark marine carpet, and is fitted with a passenger grab rail.

The helm console has a raised curved top, and instruments, switching, capstan controls and electronics (a Simrad touchscreen GO7 sounder/plotter) are all flush mounted.

The Ultraflex hydraulic steering features a nice ‘destroyer-type’ wheel, and the Mercury cable throttle-shift is positive and smooth. A Lowrance Link 5 VHF and Fusion sound system are fitted overhead, as are LED cabin lights and twin grab rails. Cabin and hardtop are lined to the deck with marine carpet.

The hardtop extends back to offer good shelter to the helm seats and also mounts a cockpit floodlight, rocket launcher, more grab rails around the trailing edges, and ‘midships tie-off cleats.

The layout has been configured to provide maximum work space in the cockpit. The pontoons form wide, flat gunwale tops covered by Octogrip panels which prevent your rear-end getting scorched or frozen, depending on the season. Toe space is a little restricted, but by leaning forward a little, the gunwale faces supply thigh support while fishing. This is helped by having a deck that is flat for the whole width, with no hull plates exposed. There are shelves along the sides that look wide enough to take dive bottles, as well as gaffs, poles, rods etc.

The transom wall features a step-through with drop door on the port side. The remainder is taken up by a locker that houses the twin batteries, fuel filter, isolation switch etc. The fuel port is on the outside of the transom (keeping any spillage out of the boat) and a rail guards the fuel lines and twin breathers where they pass from the transom locker through to the deck.

The rear of the transom wall features a back-curved wave deflector at the top, increasing the boat’s usefulness in the surf. The curved portofino stern supports a treadplate boarding platform, and both sides are fitted with cleats and grab rails. 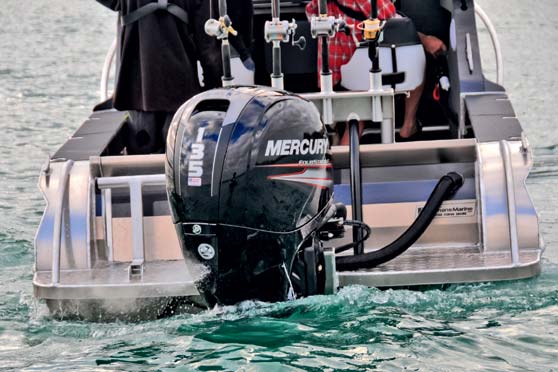 There’s a ‘T’-type fold-down boarding ladder on the port side (adjacent to the transom step-through). Divers prefer this style of ladder over the ‘H’ type as it is easier to use when wearing fins. The water intakes, transducer, etc are mounted below the platform. The test boat had been left fairly open and basic. One of the advantages of alloy is that a fair amount of custom fit-out is possible after the basic boat is built, so it makes sense to leave options open until you know what a potential customer might want. Profile offers a wide range of options and is willing to customise the layout.

Although the 600H can be turned to many purposes, fishing and diving are the main thrusts. The pontoons and transom turn-back make it useful for beach launching, and down in Hawkes Bay this is an advantage as, once away from Napier, there is little in the way of formal boat-launching ramps. The pontoons also add to the hull’s stability, which was greatly appreciated while fishing in the test day’s sloppy conditions, aided by the treadplate deck’s good footing.

Fishing fittings include: three through-gunwale rod holders along each side; a seven-position rocket launcher on the hard-top; and a further four holders on the fixed bait station on the transom, for a total of 18 positions. The bait station also features a rear gutter with overboard drainage and a good-sized cutting board that is removable for cleaning. At the end of the day Brian Firman and I could work side by side, filleting the catch without stabbing each other.

The plumbed live-bait tank under the transom step-through has a top hatch with recessed hinges and a viewing window.

As mentioned, we fished Black Reef, but only managed a couple of blue cod and some kahawai before moving out to 40m in the ‘Springs’ area off Napier. We persevered there for a few hours, and although the fishing in the Bay has been much diminished in recent years, we still managed to put 15 gurnard in the bin, as well as keeping a couple of fat kahawai for the smoker from the many others released. A ‘feed’ at least. The three of us fished together without too many problems, and four anglers would not be an issue in more settled conditions. As most do, we used an after-market ice bin to store the catch. Although there are lots of layout and customising options, this 600H was set up as an uncomplicated fish-and-dive boat with maximum work space, preserving its flexibility. It is robustly built, offshore-capable (but still reasonably towable), and handles the rough well.

It combines the desirable safety, stability and load-carrying features provided by the pontoon configuration with the weather protection of a hardtop. The pontoons taper to the bow and, added to the rising sheerline, give the rig a classy but no-nonsense look. 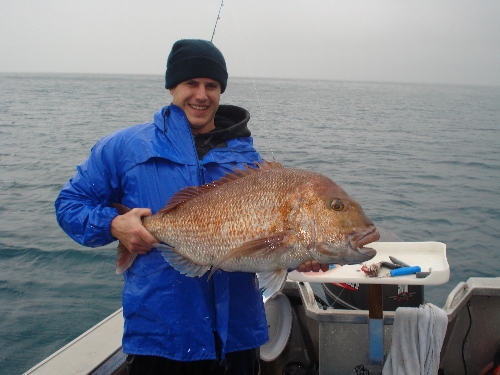