McLay boats started aluminium hull construction way back in 1986 in the quiet South Island town of Milton, about half-an-hour’s drive south of Dunedin.

Recently the company invested in a new factory there. Twenty-eight staff, lead by Steve McLay and Brian ‘Grif’ Griffin, turn out about 200 hulls a year.

Having developed a reputation for constructing solid, dependable and well-behaved hulls, the company is now represented nationwide by a network of twelve dealers, with the Milton base supplying their local region.

Recently I trialled one of the big 775 Hardtop Cruisers, in conjunction with genial Mike Stables from McLay’s Whakatane dealership Ocean Sports Marine, the top national McLay dealer for the marque in 2008. 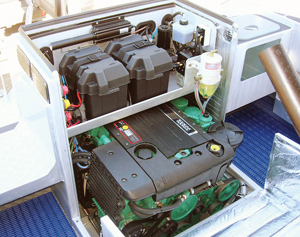 McLay uses solid construction techniques to assemble its hulls, which are built to survey. Featuring 6mm bottoms and 4mm sides, topsides and decks, the chines on the 775 are butted up and fully seam-welded inside and out, while the keel join has an external capping of 5mm material added, making the hull 11mm thick with four full seam-welds at this point. Two large under-deck chambers provide buoyancy, but reserve buoyancy figures were not available at the time of writing.

The chines are downturned and deadrise is variable to 18° at the transom. There are two planing strakes per side. Under the deck, four full-length bearers support the hull. Laterally, there are three main bulkheads plus the transom assembly; framing at 600mm centres supports the 4mm chequerplate deck.

Sealed decks drain to sumps under each corner of the transom. Each sump is fitted with two 1100gph bilge pumps, one of which is float-switch operated, while the other is manual. Any water that may penetrate to the forward step-down can be drained to the bilges via a bung. The engine-well is fitted with yet another float-switch-operated bilge pump, this time with a huge 3800gph capacity. 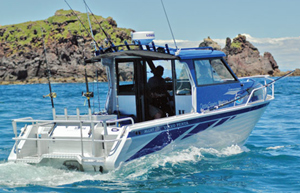 The test boat is powered by a Volvo-Penta D4-260 DP inboard engine with Duoprop drive. This compact, straight-four, 260hp diesel engine has both turbo and super-charger, so gets out of the hole rather smartly. Common-rail direct-injection and four-valve technology contribute to the 3.7-litre engine’s high performance and low emissions. Total weight (including the leg assembly) is 656kg.

The engine is a compact installation with a clever sliding tray above it. This tray holds the dual batteries, filter, power steering and other fittings in a protected but accessible position, and can be slid forward to get at the back of the engine for servicing.

The test boat has been fitted with a 300-litre under-deck fuel tank, giving enough range for stay-away trips to most destinations in the Bay of Plenty, including Waihau Bay. The fuel usage figures arrived at during the engine work-up were: 4.5 litres per hour at 6 knots (trolling); 22.4 litres at 24 knots (cruising); and 61.0 litres at 36 knots (top speed at 3485rpm)

With Whakatane Ocean Sports Marine’s Mike Stables, and Jason Riedinger, Mike Clay and myself aboard, the 775 McLay Cruiser headed across the Whakatane Bar in late November, headed for White Island, about 50 kilometres offshore. The bar was calm enough, but in the open water a stiff easterly was working against a dying northerly swell of a metre and a half to create a nasty confused sea, capping and ugly – a challenge for any trailerboat.

The big McLay just ate it! At 22-25 knots it was a comfortable sit-down, if lively, ride, with little spray coming aboard even in the beam wind. This boat is a very soft rider with no vices that I could detect, and I was never anything but comfortable with the handling in what were pretty unpleasant conditions. Over the day the sea, as forecast, dropped away, and the run home was a dream.

Engine speed was a fairly constant one knot per 100rpm up to a top end of 36 knots at 3485rpm. The excellent Volvo-Penta throttle/shift and power-assisted steering made this boat a pleasure to helm. 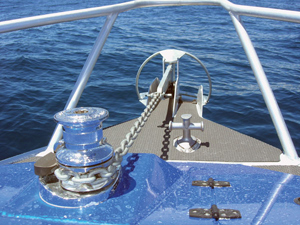 The test boat had an interesting dual fairlead; the longer side was set up with a permanently-mounted Sarca anchor, while the shorter was presumably to allow the use of a secondary grapnel for reef work.

Other foredeck furniture includes heavy bow rails and an aluminium bollard, while non-skid panels and plenty of grab rails on the cabin top offer security to those needing to climb around the side of the wheelhouse. The outriggers, when lowered forward for carrying, are a bit of an obstacle to this route, so accessing the foredeck from the hatch in the fore-cabin roof may be the better option.

The fore cabin is fully lined and two adjustable lights are fitted. The wiring in the back of the helm console is easily accessible through a hinged rear plate. Berth infills cover the centrally-mounted flush toilet to create a large double berth, with a single stretcher-type bunk above the helm side. Two large side pockets add to the stowage space available under the berths. A wide cabin entry is fitted with a zip-up privacy screen. 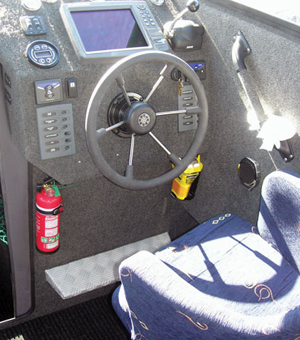 The wheelhouse features a large dash with back lip, lined with dark marine carpet, which stops items from sliding around and cuts any internal glare on the 4mm curved, toughened-glass screen. The sliding side windows are made of the same material.

In the rear of the cabin is a drop window that recesses into the wall, a lockable bi-fold door, and a smaller fixed polycarbonate window. All around vision is great, aided by a pair of wipers on the ‘screen.

Helm seating is a comfortable upholstered sliding, swivelling bucket with storage drawers fitted underneath. Behind this is a galley unit – under a squab seat is a freshwater sink (supplied from a 100-litre underfloor tank) and two gas

burners with a fridge beneath.

On the passenger side two bench-seats (with internal stowage) are separated by a fold-down table. The front seat has a reversible backrest so the occupant can face in either direction. This section can be built so it forms another bunk if required. Other fittings include cupholders, halogen task lights, and touch-switch ceiling lights. Grab-rails are placed in strategic spots, including a pair running along under the ceiling.

Although the cabin had been lengthened about 30cm more than standard, the cockpit is still a reasonable size. On the passenger side of the rear cabin wall is a built-in bench seat/storage unit, which can be insulated to form an ice box. The helm side had an aftermarket plastic ice box in place. A knife bucket and a pull-out freshwater shower (the engine heats the water) are set into the wall. The hardtop overhangs the rear of the cabin, and this shelter can be increased with an extending pipe frame and canvas cover.

The deck is chequerplate with a Tubemat cover, giving good footing, and two large side pockets extend along each side of the cockpit. It must be said that the engine box, although a compact installation, does rather dominate the back of the cockpit, but good use has been made of it, with a built-in seat and some other fittings we will get to in a moment.

A transom-step-through with drop door on the helm side allows access out onto the chequerplate platform that covers the leg. With a pipe cage built around it, this adds a bit more (albeit often wet-footed) work space to the boat. One section of the cage folds down to form a useful boarding ladder.

We jigged for a while at White island, catching a few rat kings, as well as a couple of nice golden snapper that attacked knife jigs longer than they were. A bit of bottom fishing filled out the table stakes with gemfish and tarakihi. 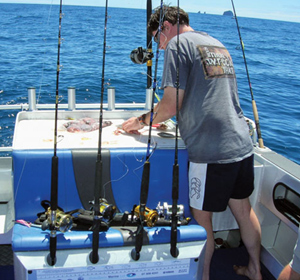 The boat was fitted with a set of Kilwell outriggers, which fold forward and are strapped to the bow rails for carrying. A live-bait tank is set into the transom on the passenger side, and a large bait-station is set over the engine box with drains to take the gunk over the stern. The hull was a stable platform, with a combination of chequerplate deck and tubemat giving good footing. The flat gunwale faces give good top-of-thigh support and plenty of toe room.

There is also plenty of rod storage. The stretcher bunk in the fore-cabin was great for carrying extra rigs securely, and a six-position rocket launcher is fitted on the hardtop. I feel that this is raked back a bit too much, angling stored rods over the cockpit airspace and constraining casting from the mid-cockpit. Four heavy-duty alloy through-gunwale rod-holders are well placed along each side, with two more on the outside ends of the platform cage, four along the rear of the large bait-station, and a further four set into the front edge of the engine box. These last holders were popular for storing rigs as they were easy to get at and kept the reels out of any spray when underway.

Ultimately though, in practice the fishing layout did not work as well as it might. The handy rod-holders on the front of the engine box, when in use, blocked access to the bait-station and further hindered casting, also preventing use of the built-in seat (this also held you back from the bait-board). The wall of rod-holders along the rear of the bait-board and the narrow rear platform would make filleting from the back end difficult too, so the only place you could approach the board was from the corners. The live-bait tank made access to one end of the platform difficult, and the platform’s central section where the engine box extended back was not a happening place either.

The design of the dropboard in the transom step-through is not conductive to sitting on if forward chasing gamefish (you need to be on the helm side so the skipper can see the line). To be fair, Mike Stables pointed some of this out before we even started fishing, and intends a different cockpit layout on future hulls. McLay will customise the layouts of hulls of this size, so problems like these can be avoided, as long as the buyer is aware of them.

Divers will appreciate the fold-down boarding ladder, transom step-through and freshwater cockpit shower (water from the storage tank runs through the engine to be heated and is stored in a hot water cylinder). A hold under the cabin deck can be used to store tanks, etc. 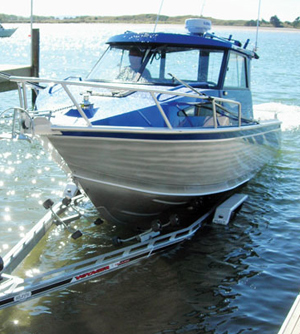 The big McLay is carried on one of the excellent tandem-axle Voyager trailers. This is their usual cradle A-frame design with an entry bay. Leaf-spring suspension is used and the hull is supported by two keel rollers and ten pairs of wobble rollers per side.

Trailer braking is controlled with a Sensabrake system that acts on both axles. Bronze rotors and stainless-steel callipers are fitted. Other features are a twin-handled dual-ratio manual winch, wind-down dual jockey wheels, submersible LED lights and mag wheels.

The 775 Hardtop Cruiser is an excellent sea boat that I really enjoyed helming. A soft rider, it made easy work of rough water. The materials used and the quality of the finish are good. With a few alterations to the cockpit layout it will make a top fish and dive boat, well-suited to comfortable stay-away trips.

As a busy charter captain, Tony Orton has the rare advantage of regularly fishing lures in some of the most fertile waters in NZ. After a lo... more >

It's generally accepted that fishing in low light yields better results than fishing during the full light of day, and fishing under a blazi... more > 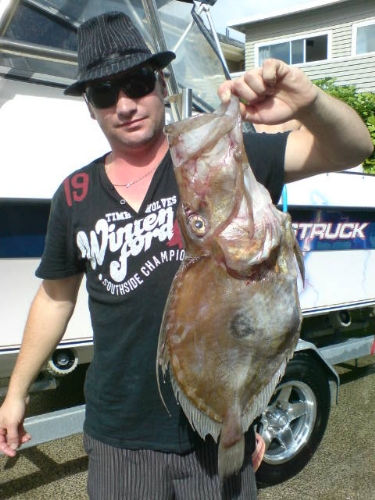