If you are going to fish offshore in a trailerboat, it helps to have a boat that has good bluewater capabilities. Managing Editor Grant Dixon spends a day aboard Latest Trick, a Makaira 740 Cape Runner, in less than ideal gamefishing conditions…

When Makaira Boat’s Allan Shaw, my daughter Miah and owner Jason Farmilo headed out of Whangaroa Harbour, it was into conditions you might have second thoughts about on any other day. It was blowing 20 knots SE, forecast to go a little higher, and there was a building two-metre easterly ground swell to back it up – hardly perfect for ‘pulling plastic’. 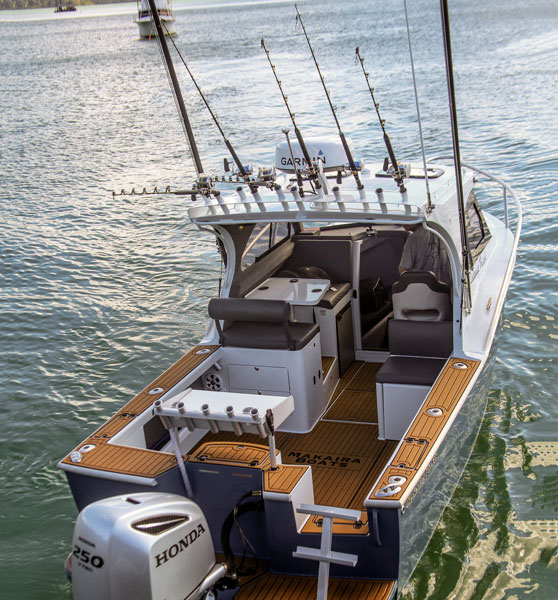 The keenest of all to get on the water was Allan, who says these were just the conditions the Jarrod Hall designed hull revelled in.

“Makairas are designed and built to handle tough blue-water conditions,” he commented.

This type of day normally sees me reaching for the anti-inflammatories, as a dodgy knee and bad back are likely to give me grief at the end of a day being tossed around.

There were half-a-dozen boats hugging the harbour entrance, perhaps testament to the conditions we might expect further out, and they were not wrong.

At the helm, Allan set the ZipWake to optimise the trim, then we cruised to the 100-metre mark at around 18 knots (I could sense he was holding back for my benefit!), before quartering the sea to run north while setting the gear.

On the run out I was waiting, and bracing, for a hard landing that never came. The only slight discomfort was the occasional drop of water down my neck off the sun shade. The Makaira’s performance was exemplary, other than she liked to splash a little water around.

In trolling mode, regardless of which way her nose was pointed, Latest Trick did not present any vices.

For the trip home, Allan had that gleam in his eye as he put the hammer down, pushing the Makaira hard into the conditions on her port quarter, which had worsened as the day went on. Once again, I waited to fall off a wave, followed by the inevitable backjarring landing, but it never came.

Our skipper worked the throttle and the ZipWake trim to get the best out of the hull, reaching speeds just over 30 knots. I have yet to experience a better blue-water performance in a similarsized alloy trailerboat.

While this is a feature on how Makaira is set up for sportfishing, it is hard to go past her exceptional performance, which is a credit to both the small team at Makaira Boats and their Tauranga-based designer.

Jason and Allan have consulted far and wide in putting this project together.

Allan’s background is in marine systems engineering, qualifying while at Auckland’s Alloy Yachts, before moving into the gas and oil industry overseas. Returning home in 2014, he went to the Hutchwilco NZ Boat Show with $250,000 to spend, but couldn’t find a suitable boat or anyone willing to take his ideas onboard.

He then built the first Makaira, a 940, with help from a mate, which took 18 months to build. This boat was seen by another keen angler, and before he knew it, Allan was in the boat-building business based in a small Waipapa, Northland, workshop.

“The first owner, Matt, took a real punt and had his Makaira 940 fully spec’ed out,” Allan says. Jason says working with Allan has been an enjoyable experience.

“We are both keen on our fishing and he understands what I want in a boat – he has even said ‘no’ to me a couple of times,” Jason says.

The need for a game chair was one debate, and Jason is pleased he took on board Allan’s advice, leaving the cockpit uncluttered.

Jason had a friend who had a Makaira 840 and it was on his recommendation that he approach Allan for the 740.

“I guess I took bit of a gamble, as I didn’t even sea trial a Makaira, but I liked the science behind the boat after seeing the weight study and the CAD drawings.”

This is the Farmilo family’s third boat, and with wife Hayley and sons Luca, Nico and Koby all interested in boating and fishing, they needed to step it up a level.

Gamefishing is a passion for Jason, and the clean lines of the cockpit reflect this.

The 19-foot Reel Rods telescopic riggers are set in OceanBlue bases. The double halyards, fitted with Blacks release clips, are easily worked from the cockpit. Jason opted for the longer ‘riggers as they are stiffer, providing a crisper release. 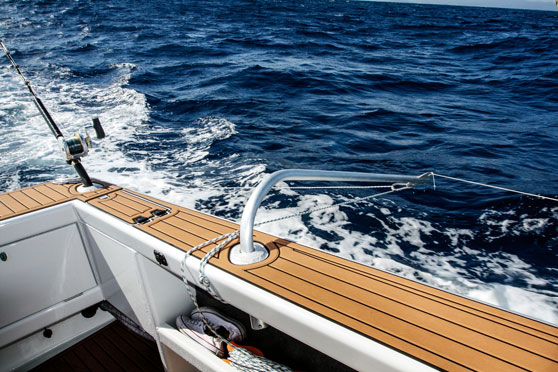 Set inside the cabin are two Shimano Beastmaster electric reels, used to run the teasers when ‘tease and switch’ baiting for billfish.

“It was one of several ideas to come out of discussions with Tony Orton of Offshore Adventures.”

Allan has come up with a unique design for the dredge ‘rigger. It is angled out and down so the dredge runs as low in the water as possible. The short corner lure is run off the short halyard just a metre or two behind and above the dredge, with both running in clear water away from the wake.

The baitboard is removeable when gamefishing, enabling the angler to easily follow their fish from one side of the cockpit to the other.

In either gunwale are two enclosed tuna tubes, with the water circulated via a 1100gph Rule pump set on stern-mounted plates.

Taking centre stage is a large capacity live-bait tank with a clear front – it should take around 50 decent-sized jack macs no problems. Limitech Pro underwater lights across the transom help aid the baitfish catching. 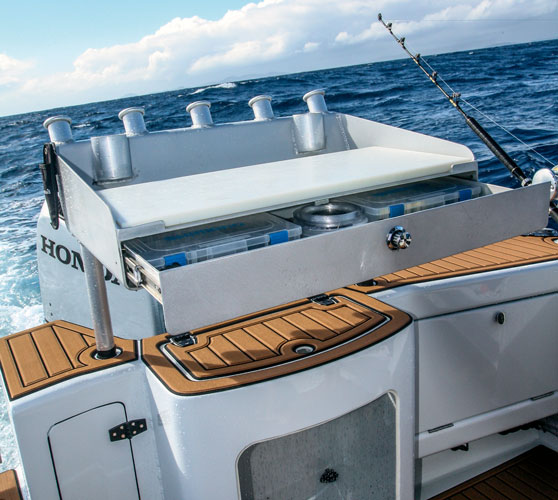 There is plenty of rod-holding capacity, starting with the 11-rod double-bank rocket launcher above the cabin, five more holders across the baitboard, and six in the through-gunwale holders, with the latter angled to always have the rod tip facing directly astern for trolling.

Jason is a stickler for storage (“a place for everything, and everything in its place…”). Allan has this well catered for, and every available space has been turned into a drawer or a storage option. A 120-litre icebox slides in under the king and queen helm seat on the starboard side, leaving the cockpit uncluttered.

There are three large storage areas – perfect for dive gear, fenders, spare ropes, berley pots and the like – set under the cockpit floor and accessed via hinged lids.

SeaDek features prominently on all the flat surfaces, from the cockpit sole to the gunwales, swim step and the like – anywhere comfort and good grip is required. This is a hard-wearing product with an imitation teak style that sets Latest Trick off nicely.

The family like to overnight on their boat, so there is an electric toilet up forward, a Fridgetech fridge and Dometic double-burner gas hob.

There is comfortable sleeping for three up forward, and the cabin table drops down to create a fourth, shorter bunk or day bed. The cabin locks up with a sliding door, providing security for valuable tackle.

A Fusion five-channel amplifier sound system belts out the tunes and is linked into the Garmin 16-inch GPSMAP XSV chartplotter/ sounder/radar housed in the helm station. Jason says he has been impressed with the Garmins to date. Although we didn’t fish any deeper than 135 metres, baitfish schools and fish on the bottom were clearly defined. The fact that it interfaced with ‘everything’, including the autopilot, is appreciated by Jason.

Another tool at the skipper’s disposal is the ZipWake trim system, which operates through 300mm interceptor blades on the transom.

“I particularly like how boats fitted with ZipWake trim system get out of the hole without the bow coming up, transitioning onto the plane with a very level attitude,” Allan says. “Even less experienced skippers will be able to get optimum trim automatically. Just set it and forget it.”

Next Trick is quite a tall boat and catches the wind easily. To combat this, especially given it is single outboard vessel, a Max Power 40 bow thruster has been added. Coming into a berth or alongside the wharf has been made much less ‘bum clenching’ than might be the case without one.

There is excellent all-round vision from the helm station. Jason has steered clear of windscreen wipers, instead choosing to apply Rain-X to maintain the best vision in rough conditions – it certainly worked on test day!

Anchoring is also undertaken from the helm via a Lewmar Pro Fish 1000 capstan. A large forward hatch gives access to the bow.

There are plenty of handholds around the boat, and two hatches above the skipper and passenger provide a good airflow on those hot days.

At the other end is a Honda BF 250 four-stroke outboard, which Jason initially thought might not provide enough power to drive such a heavy boat. However, Allan said it would be enough, and it certainly is, with the Honda providing plenty of punch in the rough conditions, and being quiet and clean-burning at troll speed.

The finish on the Makaira is good, and is all done in-house with product supplied by Wynne Fraser Paints. The vessel is painted and carpeted throughout.

Last, but not least, is the tandem-axle, braked trailer built by Makaira Boats. Like the hull, the trailer is a work of art. Slides, as opposed to rollers, are used, and an electric winch aids retrieval. The large stone guards in the front have zips in them to give access to the safety chain and hook point. All very practical.

The Makaira 740 Cape Runner is a very capable sportfishing boat. It has been well designed and planned, with excellent balance and form, the two factors that determine a hull’s performance. Designer Jarrod Hall and builder Allan Shaw have got the mix with this one just right.

Base price: $193,000 (includes boat, trailer, Honda 250hp outboard, Furuno electronics and many other features. Go to www.makairaboats.com for full details)

in The Work-Up
46 minutes ago
White snake

in Buy Sell Trade or Exchange
3 hours ago
cornf3 in Buy Sell Trade or Exchange
12 hours ago
Seedo