After the considerable success of FC Boats’ five-metre class centre console rigs, it was decided to extend the configuration into their range of four-metre hulls. Some customers wanted to see a fully built-in transom on these smaller boats, too. One of the results is the new FC 465 Centre Console. This is based on the highly popular 430 hull with the extra length provided by the new transom design. As an owner of one of the earlier 430 hulls, Sam Mossman couldn’t wait to see how the new rig performed.

On a calm spring morning I headed down to the Waikawau ramp near Thames, to meet up with genial Ross Christensen, founder of FC Boats. Auckland was just dropping back to Covid Level 1, the Harbour Bridge had been fixed, summer was just around the corner and the snapper were starting to bite. What more could you ask for?

FC Boats are well known for their innovative designs, giving good stability as well as a smooth ride. These features are used to advantage on the 465 with the relatively modest-sized hull still being able to sustain the centre console and T-top without compromising its stability.

Another desirable feature is the high level of reserve buoyancy – 475 litres – provided by the underfloor buoyancy chamber and the foam-filled gunwales.

As mentioned, this hull is a development from the 430 hull, with the new transom design a main difference. Instead of the single thickness of transom wall with a dropdown for the engine mount, the new design features a fully built-in transom wall with the outboard bracket-mounted behind. The bottom is 4mm aluminium, the sides 3mm, and the decks 4mm tread plate. The construction is robust, featuring four full-length bearers and down-turned chines that add to the stability.

The FC 465 is rated for 40-60hp engines and the test boat was powered by a Mercury 60 CT (Command Thrust) four stroke, turning a Vengeance 12”-pitch prop. Command Thrust outboards are fitted with heavy-duty gearcases that have gear shafts larger than those in standard outboards, getting the boat on plane and keeping it there at lower speeds without impacting top speed. With two big adults aboard (Ross is tall, I am broad) plus 25 litres of fuel, we cruised nicely at around 20mph and 4200rpm. 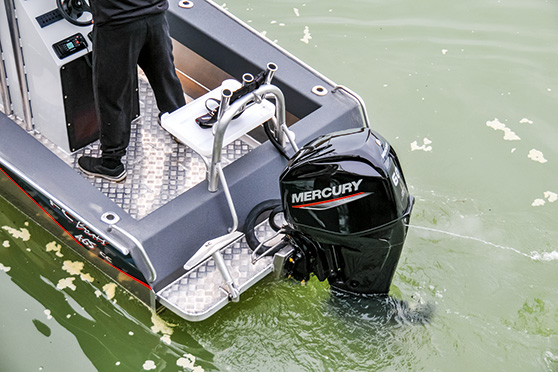 The outboard is mounted on a bracket in this new model.

The rig topped out at 30mph (48.3kph or 26.1knots) at 6000rpm. Given that the ‘book’ top-end revs are 5500-6000rpm, the 12” pitch prop is a good match, offering plenty of torque. Although a slightly coarser pitch prop might produce a little more speed, the rig was a comfortable performer as it was (see the performance figures on page 118).

Conditions were pretty decent and the rig travelled softly and took no spray aboard. It was fitted with a set of clears around the console, but on this day we could have left them behind. The cable steering is fine on an engine of this size and with the electric tilt and trim, adjusting the engine to run at the correct angle to get the best performance for the load and conditions was easy.

The foredeck and gunwales are finished with FC Boats’ robust, charcoal-coloured ‘spray on deck liner’. The forward anchor well is a decent size, but no winch is fitted as the Spot Lock feature on the Minn Kota electric outboard will hold the boat in position without the need to anchor. The centre console configuration allows easy access to the bow and opens up a lot of fishing room. The forward bulkheads provide two levels of stowage behind the anchor well and a lockable glovebox is also fitted. The decking is 4mm Treadplate which provides good footing. 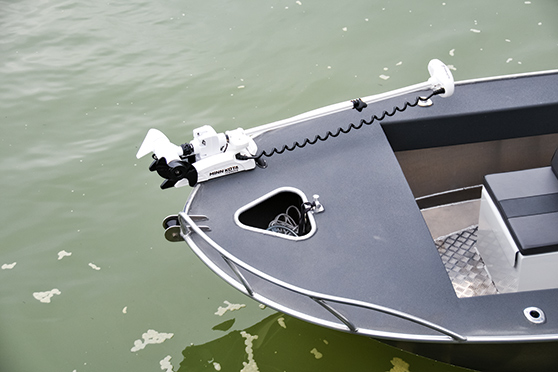 The centre console layout allows for easy access to the bow.

The centre console supports a T-top with canvas covering and a set of clears that fit around the support frame if more shelter is required, a rocket launcher, forward light bar (for early and late departures and returns) and a cockpit spotlight. The T-top can be easily removed by undoing four wingnuts for easier stowage or long-range towing. 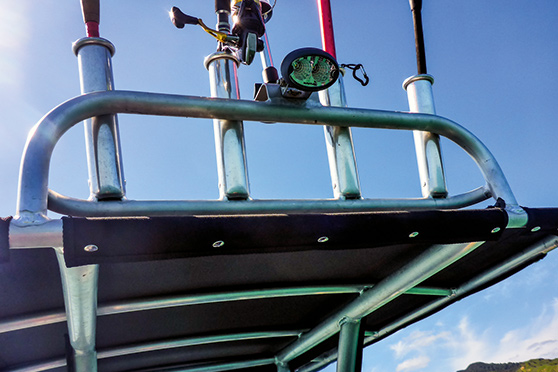 A cockpit spotlight is mounted on the T-top.

The console itself houses the batteries, plus a 25-litre tote tank for in-use fuel. The rear face has a dome-on cover and there is a dash tray for odds and ends on top.

The console carries the wheel, throttle/shift, rev gauge, a Simrad GO7 sounder, GME G Com VHF radio, switching and USB/12V outlet. A chilly bin/helm seat can be fitted behind the console but was not included on the test boat. We were quite happy perching on the gunwales and enjoyed the extra fishing space. 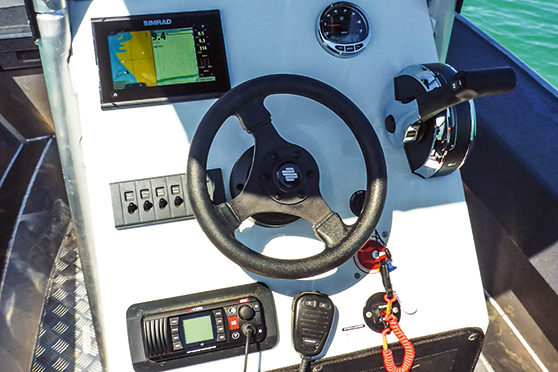 Electronics, steering and controls are mounted on the console.

The transom has been built in on this model, as mentioned. It features three hatch entries to handy stowage space and mounts a removable bait station which features a tow point for water toys. 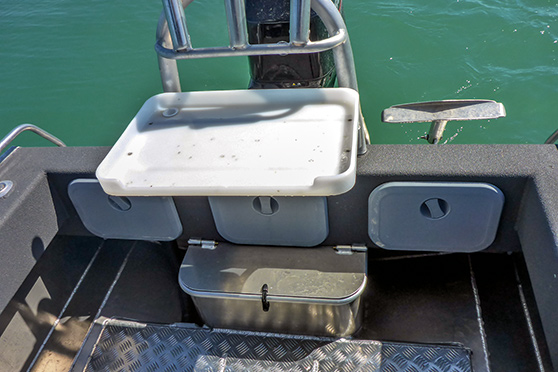 The bait board is removable for cleaning.

Over the transom is a treadplate boarding platform with grab rails and a fold-down T ladder on the port side. Underwater mounting brackets are fitted so items like intakes or trim tabs can be added without having to drill holes in the hull. 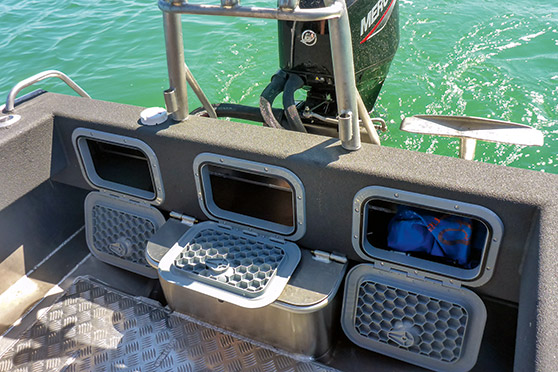 Many of these features are optional extras on this highly spec’d rig and there are plenty more on offer if required.

A boat of this size and configuration is ideal for coastal sportfishing. As is becoming increasingly common, the FC 465 was fitted with an electric outboard in addition to the main engine. The electric outboard of choice is a Minn Kota Terrova, a 12V model with 55lb of thrust, a 54” shaft, GPS i-Pilot remote control and ‘Spot Lock’ feature that will hold the boat in position at the push of a button. The Minn Kota has a Mastervolt AGM battery and the start battery is a conventional marine lead acid type. They are connected via a BEP automatic charging relay to help top up the AGM when underway. After a big day on the Minn Kota, it is recommended to recharge the AGM with a smart charger overnight.

This is a useful device for freshwater trolling or cast fishing with lures around shallow reefs. In this case Ross and I did a bit of soft-baiting around some of the mussel farms in the area. A considerable work-up provided us with a bunch of kahawai action, and later the Spot Lock feature proved ideal for holding us in position inside the farm so we could cast lures without worrying about drifting into the mussel lines. A couple of hours produced a nice catch of snapper to about four kilos, along with the odd gurnard.

Other fishing fittings on the boat are three through-gunwale rod holders along each side; a four-position rocket launcher on the T-top and another three positions on the bait station on the transom for a total of 13 rod holders. Centrally under the transom is a livebait tank that is free flow to the sea by removal of a bung. We used it to store the catch, keeping it fresh in the cool water without the need for a chilly bin. The livebait tank under the transom wall was used to store the catch.

FC Boats sources its trailers from fellow Hamilton company, Voyager. Ross had the design stripped back to reduce weight while retaining strength. It is not called a ‘Low Rider’ for nothing and the low, cradle design makes for easy loading. Rollers are mounted on the stern and sides, suspension is zinc protected leaf springs and the frame is galvanised box section, fitted with the usual wind-down jockey wheel, submersible LED lights and manual winch, along with a spare tire. Tow weight is 590kg.

It is a real trick to build a centre console with a T-top of this size and still maintain its stability and ride, but Ross and son Max Christensen have turned the trick. FC Boats make some great products and the FC465 CC is no exception with its many clever and practical features. A great coastal sportfisher; a big little boat.