On-Line II, an Extreme 745 Centre Console, is a project boat for NZ Fishing Media, publishers of NZ Fishing News magazine and New Zealand’s leading fishing website, fishing.net.nz. As you would expect, it is packed full of features, as John Eichelsheim discovered…

On-Line II is NZ Fishing Media’s Managing Director Grant Blair’s baby. He’s driven the project and worked closely with the boat builder and the many suppliers who made the project possible.

Centre console configurations are growing in popularity among fisherman and it is no surprise that On-Line II is an all-out fishing machine. Blair chose this model because of its outstanding fishability and went with Extreme Boats because of Fishing Media’s great working relationship with the Whakatane boat manufacturer.

Fishing Media has had a variety of Extreme project boats over the years. As Blair explained, “They look good and perform well. They’re always ready to help make good ideas happen.”

The 745 is a large, beamy, centre-console design with wide, walk-through side decks providing excellent access to the foredeck. SeaDek is used to good effect on the soles, coamings, foredeck and swim platforms. Easy on the feet, warm to the touch and smart looking, it adds a touch of luxury to an otherwise utilitarian vessel.

What isn’t purely utilitarian is the Extreme’s build quality, finish and attention to detail, all of which are first rate. The 745 Centre Console is a standard model in the Extreme range but On-Line II has many custom features and is also extremely well spec’d.

Standard fishing features include the casting platform in the bow – you can also stand on the foredeck to fish – a well-designed bait station on the transom, live bait tank under the port-side transom step-through, tuna tubes, a concealed swim-step berley pot, through-coaming rod holders with sinker cups, a rocket launcher on the back of the T-top and additional vertical rod storage either side of the console. 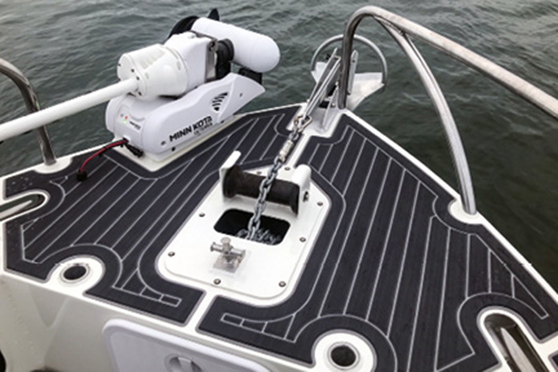 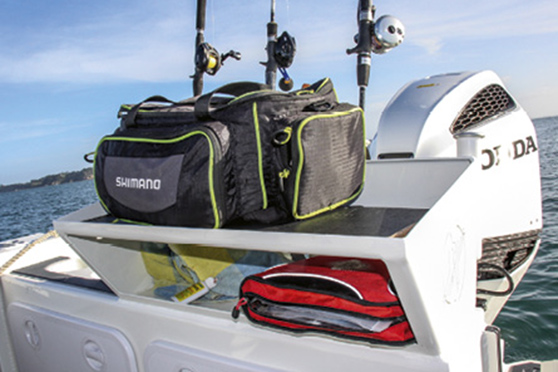 The bait station with its handy storage underneath.

Fishing Media has added a second plumbed live bait tank under the seat in the bow, additional through-coaming rod holders to accommodate game fishing dredges or downriggers, roof-mounted outriggers (to come) and underwater lights on the trim tabs. They’ve also added gunwale gaff and tag pole racks to complement carpet-lined cockpit shelves, which are deep and wide enough for dive bottles, and additional rod holders in the bow. There is no more leaning over the sides to wash those fishy hands – a knee-operated pump activates a flow of saltwater from an outlet just beneath the gunwale line. 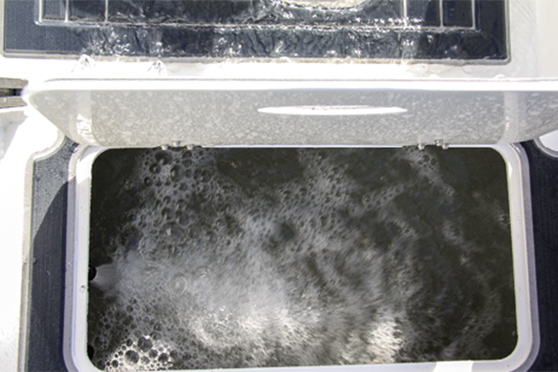 There are two livebait tanks on board - one forward and the other aft. 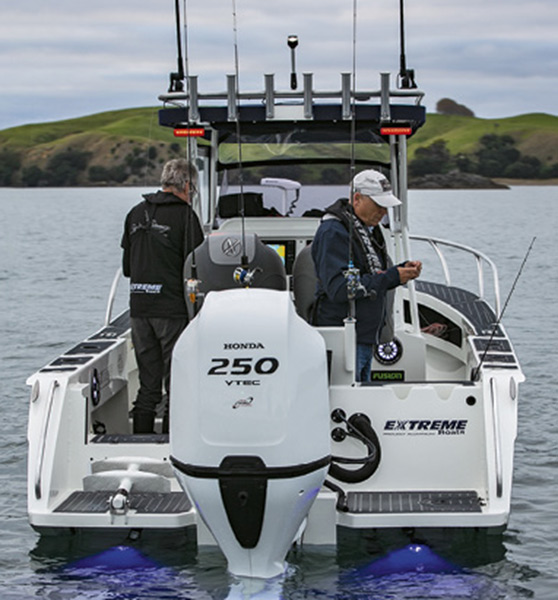 The catch is stored in a 75-litre Icey Tek chilly bin that slides under the helm seat.

The console is a substantial affair that offers good protection for the boat’s occupants, especially when the optional side clears are fitted. The twin bucket seats on sliders are comfortable and supportive, whether sitting or standing up to drive, and vision through the acrylic windscreen is good. Fold-back seat bolsters provide good support, especially when standing on the full-width aluminium footrest, and canvas pockets on the underside of the soft top can store lifejackets, charts and other gear that needs to be close at hand. Lusty and Blundell supplied the vessel’s Raymarine electronics, autopilot and digital switching system, along with a whole lot of other gear, including Ultraflex hydraulic steering, while Hella Marine supplied the LED lighting, which includes floor level cockpit lighting, floodlights and spotlights.

While the console is large, it houses the vessel’s Seakeeper II system, so there’s less space available for storage than would normally be the case. That said, storage is still generous. The seat in front of the console hinges up to provide access to the Seakeeper II and its batteries, the Mini Kota batteries and their mains charging systems, as well as shore power connection and useful dry storage. The vessel’s house and engine start batteries are carried aft and are well protected inside a transom locker. Flexible solar panels on the T-top roof contribute to topping up the batteries via customised switching.

All up, On-Line II has seven batteries, which when added to the weight of the Seakeeper II (188kg) amidships and the MinnKota at the pointy end, has shifted the boat’s balance slightly towards the bow. If anything, the extra weight, most of it low down in the hull, has benefited the boat’s handling. Two solar panels help keep the seven batteries topped up, thanks to a comprehensive switching system.

And its handling and performance are excellent. A Honda 250hp four-stroke outboard in ‘ice-white’ livery provides the motive power. It’s a good match for the hull, providing strong acceleration, quiet operation across the rev range, and a top speed of more than 36 knots with two adults aboard and the boat full of fuel and gear.

The Extreme 745 is soft riding and dry, its deep-vee hull and downturned chine flats doing the work. A flooding keel chamber further enhances stability at rest, but with the Seakeeper II fitted, lateral stability is a given, whether at rest or underway. The effect the Seakeeper II has is dramatic. With the gyro spooled up, turning the stability function on virtually eliminates rock and roll at rest and underway, and greatly reduces heel angle in power turns.

Twin Disc’s Seakeeper II incorporates a computer-controlled gyroscope that eliminates most of the boat’s roll, along with the fatigue, anxiety and seasickness that often accompanies it. Tests revealed the Seakeeper II fitted to On-Line II reduced roll by 93% when the boat is at rest in beam seas.

The gyro takes 15-20 minutes to spin up to its 9800rpm operating speed and up to seven hours to come to a complete stop. Seakeeper units require modest electrical power and can be installed almost anywhere there is space below decks or, in this case, inside the centre console. 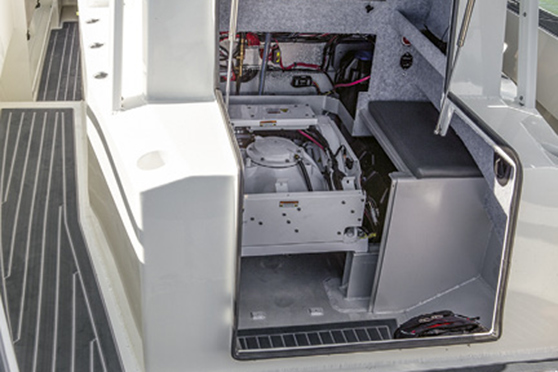 Installed in the console, the Seakeeper 2 reduces boat roll by up to 93 percent.

We had very little sea to contend with on our test run so had to content ourselves with crossing a few ship-wakes to get a feel for the Seakeeper II in action. Even with only a low chop, engaging the Seakeeper reduced the boat’s motion from minimal to rock-steady. Grant Blair demonstrated just how effective the Seakeeper is by climbing onto the side deck, gripping the rocket launcher and leaning outboard with his full weight, setting up an exaggerated rolling motion. I flicked the Seakeeper II on and the roll stopped dead, no matter how much Grant tried to move the boat. Impressive.

On-Line II is the smallest vessel in the world with a Seakeeper II system fitted, but I wouldn’t be surprised if it’s the first of many, especially as Seakeeper II is working on a smaller, more compact model specifically designed for vessels under 10m.

Fitting the Seakeeper II challenged the team at Extreme, because fitting one requires some specialised engineering and additional underfloor structure to cope with huge torsional loads, but they relished the challenge, says Blair. He expects in the future we will see many more Seakeeper II installations in small boats.

In On-Line II the Seakeeper imparts the handling characteristics and stability of a much larger boat. In a centre console design where much of the fishing will be from a drifting boat, often with anglers lined up along one side from bow to stern, enhanced stability is a huge advantage. It’s safer too as there is less chance of shipping a freak wave or upsetting the balance of the vessel.

When the Seakeeper’s engaged, keeping your balance is a cinch, which is particularly noticeable when fishing from the bow. The only negative I can think of is the potentially disruptive noise of the gyro spinning at high speed when fishing in shallow water. It’s not particularly intrusive, but it is easily detectable and probably carries a fair way through the water, so might scare away wary fish.

The noise of the Seakeeper II didn’t seem to affect our fishing one way or the other. We didn’t do well fishing the shallows early on, even after we turned the Seakeeper II off, and had to move deeper to put some fish in the boat. The Minn Kota proved very useful though, allowing us to hold the boat against the wind, move it slowly and silently, and safely navigate some very shallow water with the Honda tilted up out of the water. 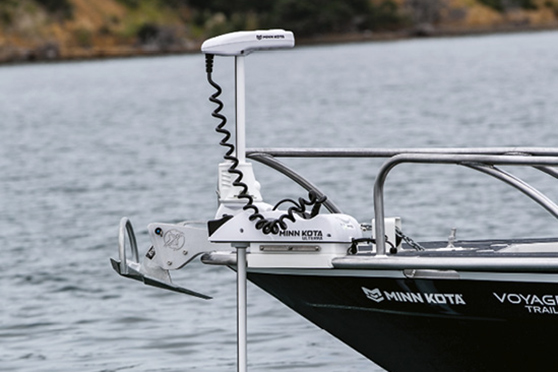 By allowing On-Line II to hold position over a reef, drop-off, bait school or fish marks, the Minn Kota should also be extremely handy when fishing in deep water with bait or jigs. The Raymarine sounder module with its big 1kW transducer should have no trouble detecting such features down to several hundred metres.

On-Line II is carried on a braked Voyager twin-axle trailer fitted with LED lights and a Balex Auto Loader for ease of launching and retrieval. It weighs in at a little under 3000kg on the road. 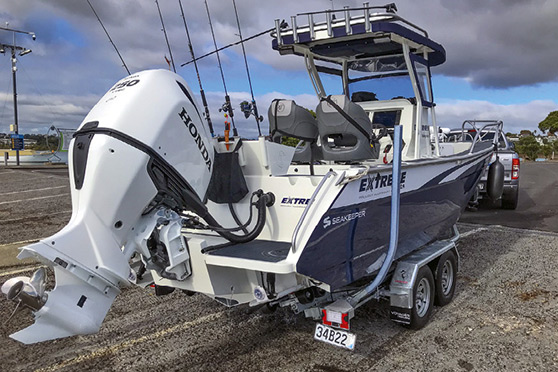 Steady as she goes

Something of an all-rounder, On-Line II will fish both coasts chasing a range of sport fishing species. The Fishing Media team have high hopes for the boat come next summer, when they intend to chase game fish, but On-Line II is already getting a solid workout on snapper and kingfish. Look out for her – On-Line II will be the boat that’s rock-steady when everyone else is rocking and rolling.

Fish Filleting - how the professionals do it January 2020

There’s a lot that we, as recreational fishers, can learn from those who get to fish for a living. Deputy Editor Miah Dixon visited th... more >

Black Magic have just released a range of new products to the local market, and the NZ Fishing News crew have been giving some of them a tri... more > 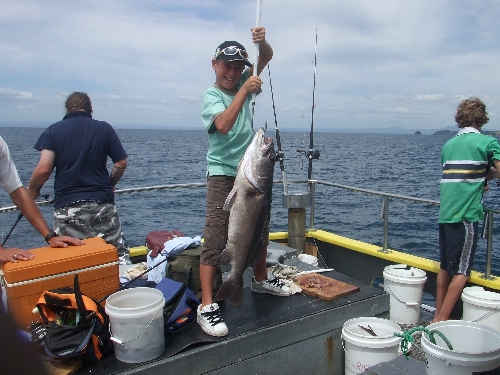 Caught by myself, dad caught piddly ones - Tauranga