Gerry didn’t want to produce yet another ‘superyacht style’ RIB tender, but something a little more practical for the type of activities Kiwis like to use their boats for.

He re-worked an existing spare Buccaneer 530 hull mould, incorporating the flanges that would support the tubes and designed a practical centre-console with lots of storage space and with help from Manta Marine, created a solid bimini strong enough to tow a wakeboarder from.

In early January I met Gerry and wife Jenny, along with members of their family, in the Bay of Islands. They were making their annual pilgrimage to camp on Urupukapuka Island – the family were in the DoC camp and Jerry and Jenny were aboard their Formula 54 launch Blackbeard.

The Enforcer 550 was being used as both a tender and for family fishing, diving and water toys fun – exactly what Gerry had envisaged it for.

Picking me up at Rawhiti, Gerry, with grandson Fin Watson on board, headed out into the middle of the bay for a quick fish. The action was a little slow, but we ended up with a nice snapper for dinner and Fin was given a workout on a kingfish that didn’t quite make the grade and was released.

I had a short scrap with what was likely a big snapper that ran me to ground, breaking through my light 20lb trace – but if you don’t weigh it, don’t say it!

A couple of hours on board working soft-baits gave me an excellent feel for the boat. With the way the hull flange design locates two-thirds of the tubes outside the gunwale line, there was plenty of internal space – something not always evident on RIBs of this size.

There was good ‘toe space’ at the rear of the boat too, enabling the angler to get to grips with a decent fish. There was plenty of space for the three of us to fish unimpeded – Fin worked the bow area while Gerry and I fished out of the back. The tubes are great to sit on and fish from and the Burnsco double helm seat has a reversible back, providing comfortable seating regardless of which way you are facing.

An 70-litre Engel chilly bin in the cockpit didn’t impinge on the anglers’ space. As we were lure fishing, Gerry had removed the bait board which, when in place, is fixed to the ski tow-frame. It was stowed in the forward compartment of the centre console.

There is a remarkable amount of storage aboard for a centre-console vessel of this size. The helm position has been slightly offset to starboard, leaving space on the port side for three vertical, open storage areas which are well protected by the custom Sandbrook screen, as well as a set of clears which have still to be added. A fire extinguisher, small tackle box, cellphone and odds and ends occupied these spaces – all stuff you need close at hand but also kept out of the elements.

There is a large storage area under the double helm seat where the fenders and drogue were placed, and a further three compartments set into the transom, accessed via hatches. One contains the batteries and isolating switch, the other the washdown hose and the third is for general storage.

Under the cockpit floor is space for a 22-litre tote tank and on the test boat there was a 100-litre underfloor fuel tank. The tote tank space looked as though it would hold a couple of dive bottles along with weight belts.

In the forward section of the centre console is another large storage space, the lift-up hatch for which incorporates an upholstered seat.

Gerry says it would be possible to fit a small chemical toilet there as required. Underfloor in the forward section is room for the anchor, chain and warp with another small storage area under the step-up access to the fairlead.

There is plenty of rod storage. Four holders are set into the transom with more in the bimini – a good number given the intended multiple use of this rig. The bimini folds down for storage.

The deck is clad in U-Dek and offers good grip. There are several handholds placed strategically around the vessel. LED courtesy lights illuminate the deck space at night.

Electronics wise, a nine-inch Lowrance Elite sounder/chart-plotter dominates the helm station and there is room for up to 14-inch screens. A GME stereo and G-Com VHF also feature and there are both standard 12-volt and USB sockets, along with a battery status indicator. Interestingly, the throttle/gear shift is located on the outside of the centre console pod.

For divers and swimmers, there is a ladder on the transom and a small swim step to make getting back on board easier.

The Enforcer 550 is powered by a Mercury 90hp four-stroke outboard. Gerry ran the boat at a comfortable cruising speed of 25mph, the tachometer showing just under 4000rpm. A quick burst of throttle saw the speed jump to 35mph at just over 5000rpm. No fuel figures were available, but with potentially 122 litres on board, the boat is going to have a huge range.

Gerry’s grandkids are right into their wake-boarding. The Enforcer 550 is a good tow boat with the rope run off the rear of the bimini, providing as much height as possible.

The vessel is a dry one. While the day was mirror-calm, we took on multiple wakes created by large launches and the Enforcer handled these well, with very little – if any – spray thrown up.

It is also easy to keep the fishing space clean. Blood from one of the fish had splattered around the cockpit area but a quick hose out with the washdown flushed away the blood and water via a scupper into the bilge where the bilge pump sent it overboard.

The pontoons, given the way they are attached with more of their diameter outboard than inboard, deflect much of the spray. Created by Southern Pacific, Gerry likes the fact they are made from PVC and the seams are fully welded rather than glued. Hypalon tubes are another option.

All boating is all about compromise. The Enforcer 550 is a practical dive/fish rig, but still able to cater for water sports, whether wake-boarding, skiing or towing toys.

I was impressed by the stability of the boat. It was comfortable to fish from and the bimini provides an element of shade. In meeting Gerry’s criteria of an all-rounder, it well and truly ticks the boxes. 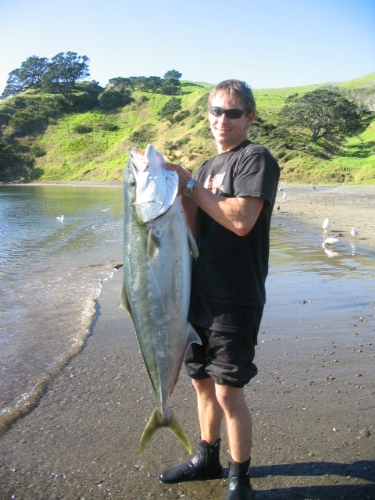