Convenience is key to the recently released FC635 HT amphibious version according to its new owner Brian King. Grant Blair reviewed the latest offering from FC Boats at Opito Bay on the day it was handed over.

I like what FC Boats have done with the amphibious version of their FC635 HT – its finely styled lines are melded with the game-changing practicality of wheels. So not only does this rig look superb, it really delivers on all fronts. Brian King, the new owner of Kingy, confirmed what I’d suspected all along: the rig ticks the most important box, convenience, which translates to more fishing and diving.

Opito Bay has traditionally been a tractor/trailer launch spot, but an amphibious craft removes the effort and angst from both ends of a fishing adventure. It means getting into the water without fuss, wet feet or the surf smashing fragile limbs on immovable objects such as trailers. It also means that quick trip for a fresh seafood dinner is back on the table when previously it’s been in the too-hard basket. Being able to quickly launch and retrieve for those spur of the moment trips was one of the key factors for Brian King when deciding on a new boat for his Opito Bay base.

Essentially this is the standard FC635 hull with an extended stern to accommodate the rear wheels and provide support for around 450kg of amphibious componentry. The design has been carefully thought through and engineered for strength, durability and safety, but importantly, there’s no difference in floor-space or fishing room. There’s no big engine box crammed in the middle of the cockpit – the Orion engine sits under the passenger seat and is out of the way.

The additional weight appears to be well distributed fore and aft and while I hadn’t ridden in or driven a standard hull, the rig performed well. Adding or reducing weight undoubtedly changes the handling profile of any boat so it’s always prudent to sea-trial vessels when you’re reviewing options. The 225hp Mercury delivered all the power you’d need and the custom colour-match on the engine is a nice touch. The Mercury 225 V6 has a customised colour panel on the cowling, which can be matched to the boat's livery.

Getting in and out of the water is a breeze. It’s no more difficult than driving a car and the interchange between propellor and wheels is simple, seamless and just so easy, even for a newbie.

The dash is set out to make the transition between the outboard and the wheels as easy as possible, with the outboard throttle on the right and the main Orion controls to the left. As you come into the beach, your right hand controls the outboard throttle and trim, your left the steering. It’s then easy to swap hands as you run through the process of starting the Orion engine, trimming and turning off the outboard after dropping the legs, and finally running it up on the beach. The steering is hydraulic and responsive thanks to a sensor from the outboard providing a signal to the NMEA network to move the front wheel, which tucks up neatly under the bowsprit when retracted. The practical helm has all the controls at the skipper's fingertips on both water and land.

There’s plenty of fishing room in the uncluttered cockpit, along with reasonable access to the foredeck. The side-skins align with the cabin so the decks extend further than what might be standard on many hulls. This means that getting to the sharp end is not like walking a tight-rope as it can be on some hulls. A MinnKota is fitted and runs diagonally across the foredeck – a practical option compared to the usual fore/aft layout. With the MinnKota deployed, casting from the foredeck is an option in reasonable conditions, increasing the overall fishing room – and there’s also no shortage of rod-holders.

For divers, the rear wheels can be lowered to the optimal level to provide a comfortable and convenient entry/exit platform. 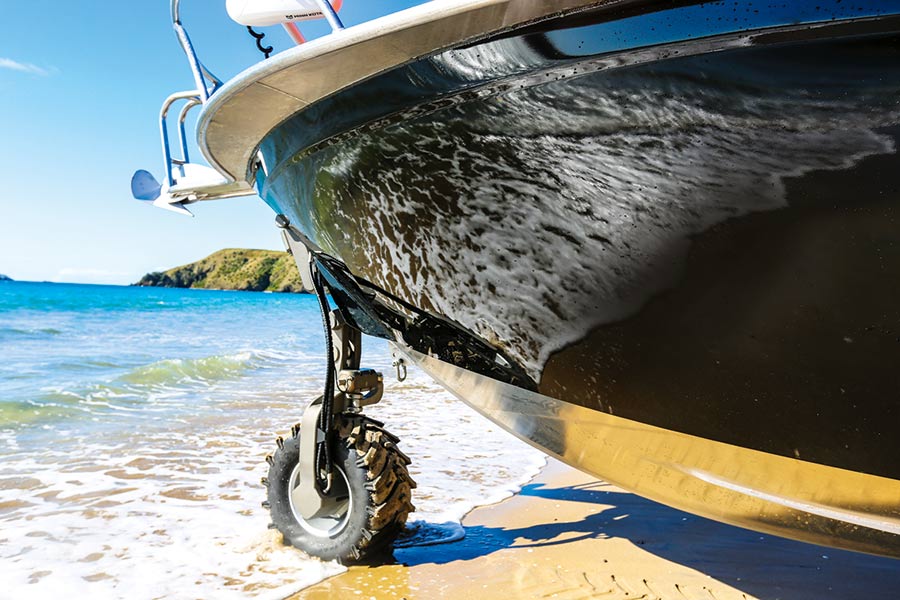 The side-skins align with the cabin so the decks extend further than what might be standard on many hulls.

The transom has been skilfully engineered to maximise the available space and ensure optimal spacing of the components. There’s room for two Zipwakes which are pushed to the edge and tapered so the rear wheels are as close to the edge of the transom as possible to provide maximum stability on land.

There’s plenty of storage right throughout the hull with various handy side-pockets and a large dash. Lifting the cabin seats revealed two removable aluminium bins which was a nice idea.

The cabin has an in-fill option for over-night stays and FC Boats are always receptive to requests for customisation to meet a specific customer’s needs. The only sign of any additional appendage on the bow from within the cabin is two small pieces of 8mm plate which you’d probably miss on a boy’s look. The hatch provides easy access to the drum winch and foredeck.

Sitting behind the instrument panel is an easily accessible fuse-board. The wiring looms were immaculate and indicative of the attention to detail that’s evident from bow to stern on this vessel. 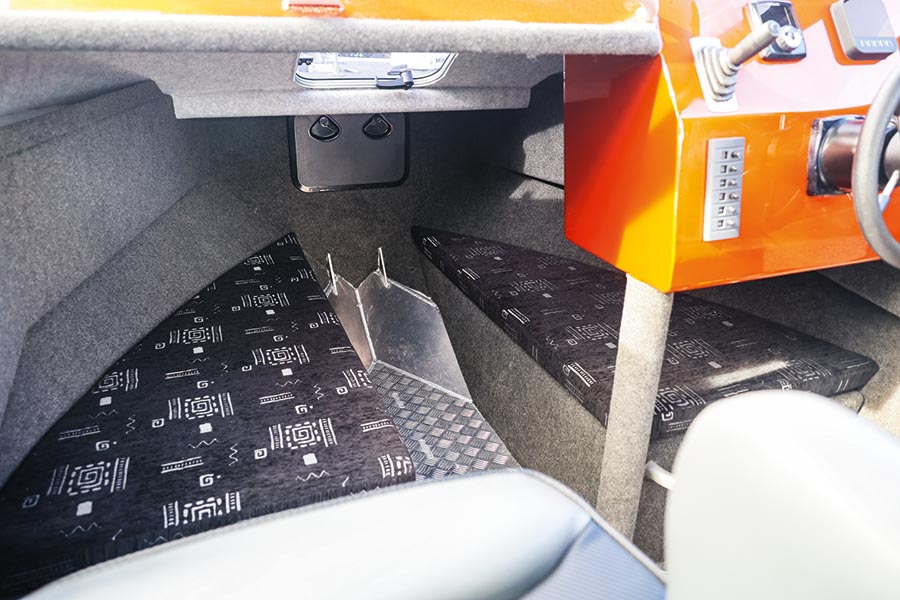 There is space for storage bins under the squabs which can be extended to create two bunks for overnighting.

Mounting the transducer on any boat requires a level of skill to ensure interference is minimal. The value of picking up those small bait schools or uncharted areas of foul when underway is not to be under-estimated. This FC 635 has a specially constructed pod for the transducer to ensure a good clean signal to the 12” MFD and with a bit of juggling, there would be room for a 16” screen.

A V-twin 40Hp petrol Briggs & Stratton petrol engine drives the hydraulics for the wheels with controls managed by a central CPU with custom software. With the motor off, or in neutral, the brakes are automatically applied which is a good safety feature. The engine cover simply unclips, providing easy access for any maintenance or regular checking. Large cooling fans fore and aft manage the operating temperature. The engine exhaust exits below the waterline at the stern and a specially constructed pipe with air lock/water-trap prevents any backflow into the engine, irrespective of conditions. The Orion system made short work of the soft sand on the beach.

Amphibious boats are head and shoulders above a traditional trailer option when you’re close to the water, and are destined to become the norm in places like Opito Bay. Convenience drives frequency of use, and with no trailer to park, no risk of getting a wave in the boot of the new Ranger and not needing an extra couple of hands to launch/retrieve, an amphibious boat could be life-changing for any owner.

With the technology now available to a wide range of boat manufacturers, we can expect to see a lot more makes and models sprouting wheels.Specifications

• Chequer-plate flooring throughout with EVA in key areas.

• Batteries well out of any range of water damage.

• Handy live-bait well under bait-board – a standard feature on an FC Boat.

• Wet storage area for dive gear/bottles which could also function as a fish-bin.

• King and Queen seating with Orion leg engine on the passenger side.

• Minn Kota batteries on starboard and fuel filler/breather high on starboard outside, making filling up a simple exercise.

• Two handwash units are connected to the washdown circuit with a relay and diodes so they switch off after running.

• Fold down cleats – nothing to get that trophy fish tangled on.

Tomorrow, Saturday 21st we're having an in store 'How To' session on catching gurnard at Franklin Hunting & Fishing in Pukekohe from 9am. We're busy preparing...

I have a hankering for nostalgia.  Has anyone reshaped and sharpened one of the old fashioned bone handled table knives as a fillet knife?  Most that...

You'll be fine. Towing for only a couple of miles each way....easy. Ramp traction would be your only issue, decent set of tyres  and go for...

in Fishing Reports
4 hours ago

Hi banana, we will be there from 9.00am. Be good to catch up. We'll stay until the interest wanes, so about 5 mins . No seriously we'll...

Port Whangarei has a high profile advocate by the name of Wayne Brown behind it.He seems to get a disproportionate amount of air time for his...