Sam Boothroyd suggests spearing a kingfish is a benchmark for all Kiwi freedivers. He recently reached this mark and just like his first crayfish, it came after a long learning curve…

Kingfish are a species that I’ve spent hours, days and months daydreaming about. The difficulty of finding kingfish, let alone shooting one, is far greater than I could have imagined. The learning curve to reach this point was steep and taught me a lot.

My first encounter was intense and disappointing. I was diving in the Coromandel along a weed line with a fair bit of swell and current pumping. There was lots of life, including some large shoals of skittish mackerel – and where there’s bait, bigger predatory fish will usually be nearby.

As the saying goes, ‘don’t leave fish to find fish’, and how true that is! I was busy breathing up when a huge kingfish stormed in, almost touching me, to check the situation out. This fish was inquisitive and hung around, even after I screamed at Dad for the gun.

Squeezing off a shot, I hit the fish high in the back. It immediately swam straight into the weed a few metres down where I watched in dismay as it tore the spear from its back and disappeared into the blue. The only consolation was that this fish would most likely survive.

There were lots of lessons to be learned from the experience, the main one being not to let Dad have my gun! The next related to the power of my gun. It only had a single weak rubber, and this, I realised, wouldn’t do nearly enough damage to a big kingfish to be effective. I added another rubber and felt reassured that I could put in a shot that mattered on my next opportunity.

I also learnt that kingfish are unbelievably powerful, and I needed to gain a lot more respect and knowledge if I was going to be able to take one out. I realised, as well, that current and bait go hand in hand – find the current, find the bait, find the kings!

Another tip is to always be prepared – anything can happen anytime, anywhere. I’ve had two kingfish encounters in which I was completely unprepared. Diving for crays creates a lot of disturbance, particularly since you will be doing little to conceal your presence as crayfish aren’t easily spooked. On both of these dives where I was caught out, my gun had been left sitting in the boat. This was all down to me assuming what species I would find in the area, and I was wrong twice.

On the first occasion I found myself swarmed by mackerel which were being followed by five big kings, all lit up and in hunting mode. While I didn’t shoot one, the experience was still incredible. The second time was so quick it could well have gone unnoticed. As I was pulling a cray out of a hole, a massive kingfish shot past me in murky water. Always be prepared!

During the last moments of our holiday up north before heading back to the Mainland, I was desperate to grab some crays for lunch while I still could. We decided to try a reef just offshore where there was a lot of current from the river mouth nearby. The visibility was comfortable, about two or three metres.

The spot was filled with deep cracks holding big, hard-to-reach crays. I was just dropping down onto a ledge in about six metres when out of the corner of my eye I noticed something huge lurking on the edge of my vision. Initially, I thought ‘shark’ and quickly pulled myself to the surface and grabbed my gun, but by then two massive kingfish were cruising underneath me – their size seemed inconceivable. I had loaded my gun without even realising it.

My first mistake. The stress and speed of it all resulted in me only loading just one rubber to the lowest notch! One of the two kingfish pulled away and as it swam directly under me, I aimed perfectly at its head. My heart was beating out of my chest as everything had been leading up to this moment. I pulled the trigger.

Eventually I managed to unlock my gun, but the fish were now at the end of my range and moving away quickly. Dropping to the bottom, I chased after them and pulled the trigger. This time the spear shot from the gun and stuck straight into the spine of one of the monster fish. I waited for it to go mental, but nothing… huh? This seemed too easy.

I started to pull the line in and felt the weight of this amazing fish and then suddenly, it was gone. Diving down, I spotted it writhing in the weeds, and so the next part of the adventure began. The shot had essentially paralysed it, and a 10-minute underwater chase ensued. Dad and I hounded the fish at full speed, going up to the surface for air and down to the reef time and time again in hot pursuit, until eventually I managed to get my hands around its incredibly thick tail. Together, we wrestled it out from the weeds. My arms were wrapped around it in a bear-hug the whole way up, and somehow, I managed to finish off the job. This is a true testament to the power of these incredible animals – even with a severed spine it put up the biggest fight I had ever experienced.

I swam for the shore as hard as I could; there was no way I was losing this trophy. I was in awe of this giant, stunned at the pure aura that seemed to surround the fish, and didn’t stop grinning for weeks to come.

After some quick photos, we shot back to camp and put it on ice. News travelled quick and we soon had people coming up to the tent asking about this kingfish they had heard about. At 111 centimetres long, we estimated it to weigh about 22kg. It was a beast of a fish and a huge first kingfish for me. That night we had kingfish sushi, ceviche and steaks, and as I write this two months later, we still have a hunk of prime kingfish steak sitting in the freezer awaiting an invitation to dinner.

The learning process and extensive time in the water made this incredible experience all the more fulfilling. I hope the lessons I have learnt will help you in your kingfish hunting. Dive safe, aim big.

• Be diving fit – you may have to chase your quarry hard.

• Find the bait and kingfish won’t be too far away.

• Be sure of your shot for a clean kill.

• Don’t panic, you have more time than you realise.

• Kingfish are curious – they may even come and check you out. 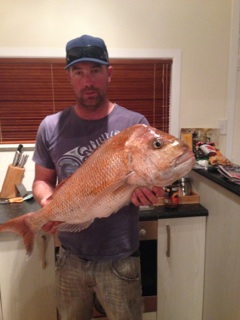