Spearfishing in Niue: A Bluewater Adventure

When it comes to spearfishing opportunities, Niue is close to peerless. Dan Westerkamp reports on his recent trip to this unique island paradise...

Just over 2400km northeast of New Zealand lies a large coral atoll. Only 65 kilometers in circumference and withits highest point just 60m above sea level, Niue is the rock of the Pacific. Standing alone between Tonga, Samoa and the Cook Islands, and with no rivers on the island, underwater visibility exceeds 70 metres most days and can often reach over 100 metres. With its year-round tropical water, live corals, drop offs, walls and healthy fishery, Niue is an excellent option for blue water spearfishing adventures. The steep drop-offs and coral formations around Niue make it the ultimate bluewater spearing destination.

Niue is unique in the fact that, unlike many Polynesian cultures, there is no history of spearfishing. With little understanding of this fishing technique and after a small disagreement with a group of visiting spearos, spearfishing was originally banned on the island. However, after many years of work with villages, the government and fishing operators, spearfishing is now an accepted activity in Niue, and how lucky that is because, as we were about to find out, “the rock” is one of the best spearfishing locations in the South Pacific.

What makes this little island such a great place to spearfish is its tightly regulated fishing industry. Due to the regulations put in place to protect the reefs and the local fishermen’s livelihoods, you are only permitted to dive with a local charter boat and there is no spearfishing from the shore. This has created one of the healthiest inshore reef systems I have ever seen. Niue is a whale sanctuary and the song of humpbacks can be heard and felt continually throughout your dives.

With Niue being so dependent on tourist dollars, it only seems fair that you support local businesses and go out with the many charters on offer. For how incredible the diving and spearfishing is, this is a small price to pay. Jumping in the water here, it is easy to see how well these regulations have worked in protecting the fisheries, particularly when compared to other areas in the Pacific. With this in mind, we enlisted the help of local skipper BJ Rex and his crew at Fish Niue charters, and headed to Niue to see what spearfishing the rock had to offer.

On arrival, we made our way to the famous Falalafa Cafe to meet our skipper and formulate a plan for the trip. After discussing recent fishing reports and the latest weather forecast, we developed a rough plan which would see us hunting giant dogtooth tuna in the far corners of the island before heading out wide to the offshore FADs (Fish Aggregating Devices) to target the island’s most prized bluewater fish, wahoo.

Dogtooth tuna are one of the toughest, dirtiest fighting fish around. We had heard that to get ready for the power and speed of a dogtooth we should stand on the side of the road, lassoo a car and then try stop it. We knew we were going up against some powerful fish so would need some serious gear if we were to land one of these powerhouses. Equipped with 130cm triple rubber guns with coated cable and heavy 8mm shafts all rigged as breakaway rigs, the plan was that, should we hit one of these fish, our gear would rocket past us and our 30m hardline and multiple floats would hopefully stop the fish before it could get down into the coral.

On the morning of the dogtooth hunt we were up early and quickly on our way to a deep drop-off which was said to be teeming with tuna. Arriving at this top-secret location with the sun just coming up, we worked our flasher while the boat drifted past, cubing chunks of tuna and rainbow runner over the side. Our third diver was the nominated shooter and should a target species turn up, it was their job to put a spear in it. With everyone doing their bit, it wasn’t long before the first tuna arrived in the trail. Lurking well out of diving range, we worked the flasher tirelessly, slowly coaxing it towards the surface. Unfortunately, it turned out be a pup of only a few kilos and although a target species, was not what we were here for. They say to shoot a 20 kilo fish you have to had let a 10 kilo one swim past, and that’s what we did for the next hour as we let fish between five and 25 kilos go by in peace. Although tempting, shooting one of these would more than likely end our chances of shooting a bigger one so we controlled our itchy trigger fingers.

Although the action was heating up, it was only a matter of time before the sun rose too high and the dogtooth would descend back down into the depths. It was at this point that our perseverance and patience paid off as a fish of what looked to be around 30 kilos came into the berley. We worked the flasher and dropped chunks. The fish slowly gained confidence and came out of the inky blue depths. Waiting for the tuna to come into diving range was a slow and agonising process, but eventually the fish came into range and our designated shooter breathed up and descended 28m to the bottom of the flasher. Unable to resist the temptation, the tuna came in for a look and a perfectly aimed shot to the brain meant it was lights out. Back on land the tuna pushed the scales out to 45 kilos – a fish of a lifetime and a great way to start the trip. 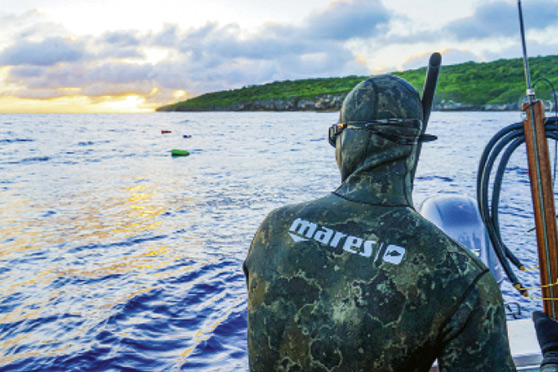 Sunrise and sunset are the best times for chasing dogtooth tuna as this when they come out of the depths to feed.

The other option for spearos in Niue is heading to FADs, which are found far offshore. These fish attracting devices create little ecosystems in the middle of the ocean which fish of all sizes and variety congregate to feed on. Hopping in at one of these is really exciting – you never know what may turn up. From billfish and tuna to wahoo and sharks, every day at the FADS is different.

We rigged up our bungees and floats, and then patiently waited in the small queue of fishing boats. Each morning the charters head out with clients and troll around the FADS a couple of times. If there’s no hook-ups, they move a few miles up the coast to the next one. Once the fishing boats are done with the FAD, the spearos have it all to themselves.

As with chasing dogtooth, a little luck is required as you drift around in thousands of metres of water with a flasher waiting for target species to show up. With rainbow runner, mackerel, the odd silky shark, whale songs vibrating through your body and crystal clear blue water as far as the eye can see, the FADs are an amazing and peaceful place to dive. However, all that is forgotten when the packs of large mahimahi, a prized table fish, swim past. They are usually fairly inquisitive so are an ideal target for beginner spearos. They are great fun to shoot as they light up bright green and yellow and then proceed to jump out of the water or swim in circles, generally causing a huge mess of your gear. They are a fantastic fish to target on your first bluewater trip.

Wahoo are the main reason fisherman and spearos travel to Niue year after year. With wahoo weighing between 20-40 kilos caught daily, they are the island’s most prized sportfish and are great fun to target with the spear. They require a lot of patience and some skill to shoot so getting one in the boat is a very rewarding feeling. 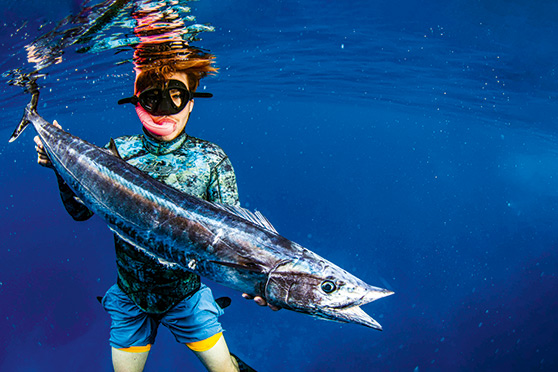 Brayden with a nice wahoo.

With crystal clear blue water and no way to measure distance, many spearos get quickly frustrated watching their spears go flying over the top of wahoo or falling well short. This is where a good breath hold, and a bit of stealth, comes in handy. I find quietly sinking below the surface, making minimal noise and avoiding eye contact is the best way to coax a wahoo into coming close enough for a shot. My one key tip for shooting wahoo: when you think you’re close enough, get closer.

A 130cm gun with a breakaway rig will give you plenty of range and a 25m bungee with a couple of big floats will ensure the spear doesn’t rip out of the soft flesh when tension comes on. 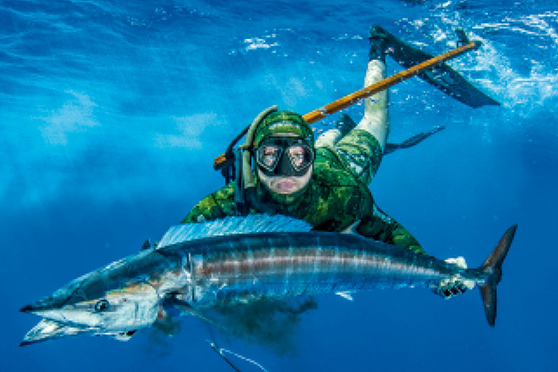 Cam with a solid wahoo on the second day of the trip.

Diving in Niue is unlike anywhere in the world. Niue is leading the way in coral regeneration, humpback whale research and reef preservation. There are few places left in the Pacific where you can swim with large schools of jacks and barracuda, and get up close to huge parrotfish, coral trout and big eye bream. This is all thanks to the rules and regulations put in place to help protect their vulnerable reefs from over fishing.

The incredibly healthy fishery and gin clear water make the trip worthwhile, even if you don’t take the gun. However, if spearfishing is your thing, book a charter and head out with a local skipper. They have the knowledge to put you on the fish and you can feel great about supporting the people of Niue. Just remember to respect the local laws so that this amazing spearfishing destination can be enjoyed for many years to come. Thanks to BJ from Fish Niue Charters for putting us on the fish – be sure to contact him to book a Niuean spearfishing adventure! 80 metres from the club - plimmerton