According to Darren Shields, the beauty of free diving and spearfishing is that they’re activities which can be done at all ages. On a recent trip that was special for a number of reasons, he got the opportunity to see first-hand how little age needs to be a limitation…

Earlier this year, an old teacher of mine asked if he could join me with three of his friends on a trip to Fiordland. Ron Morgan taught me in form two in 1978, 42 years ago. I have fond memories of his class and sporting ability back then. Ron was bringing along his crew of Tak, Blink and Tug. With nick names like that, I don’t think I need to say any more other than that they were absolute legends to fish with.

I was also taking a father and son team of Wiremu and Mark Gavin, my old mate Grub McKenzie (a diving legend from the north), plus Matt Parkinson, brother of my great old dive mate Paul Parkinson who unfortunately passed away on a dive at Little Barrier several years ago.

Matt wanted to share in his brother’s experiences, so catching himself a monster red cray and spearing his first fish were top of the list. This year, all things considered, was a very special one for me.

Our flight in was one of the best weather-wise I have ever experienced. All the team were blown away. We flew in tandem through the mountains with two choppers – those who have done this will know the thrill! 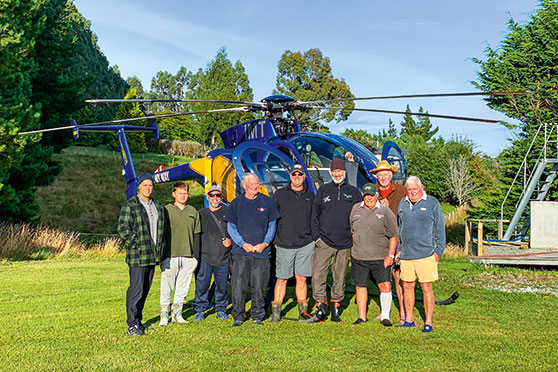 The team assemble for what was to be a fantastic ride in with two helicopters.

Ron and his team were all about fishing, and Grub, Matt, Wiremu, Mark and I were the dive team. Scallops were first up, and we found these quickly at the head of a sound, gathering just enough for a small entrée that evening.

Crays were next. I knew of a bay that I had never been able to dive previously, but the sea looked flat enough to finally get in there. We weren’t disappointed. Big crays were everywhere, as were paua you only dream of when you live at the top end of the country.

All the boys nailed some beauties and the chatter on the boat after the first day was so good to listen to.

Back at the mothership, the fishing team had done well and were also full of stories. For northerners, coming south and leaving behind their beloved snapper to chase the much-touted blue cod is an adventure in itself!

The week went on as the first day had: lots of excitement, fun and adventure. But one thing that needed to be done was for me to get my teacher from 42 years ago into a wetsuit and teach him how to grab a crayfish and spear a fish.

When we were nearly done for the week, we decided it was now or never. Out came some spare gear and with plenty of banter and laughter, there stood my old teacher ready to let himself loose on some underwater game.

I chose a spot that is gentle on a new diver. It has nice shallow ground out of the swell and loads of sea life.

Ron did not hesitate. At 72-years-old, he flung himself out of the boat with the same enthusiasm he taught with back in the day.

I let him slowly get accustomed to the surroundings without putting too much pressure on him to grab something.

We spent around two hours swimming a short stretch of coast and Ron did incredibly well. His first catch was a nice cray. Once he locked on to its horns, he was determined to drag it out, and after several attempts he did just that.

With one box ticked, he now wanted to try a speargun. We called the tender over and drifted over some shallow sand. There were plenty of fish, so we deployed a couple of cracked sea eggs to keep them interested.

A couple of good-sized blue cod couldn’t get into them fast enough. Ron was armed and ready to pounce. A nice thrust forward and down had him hovering over his intended target which he dispatched with ease. 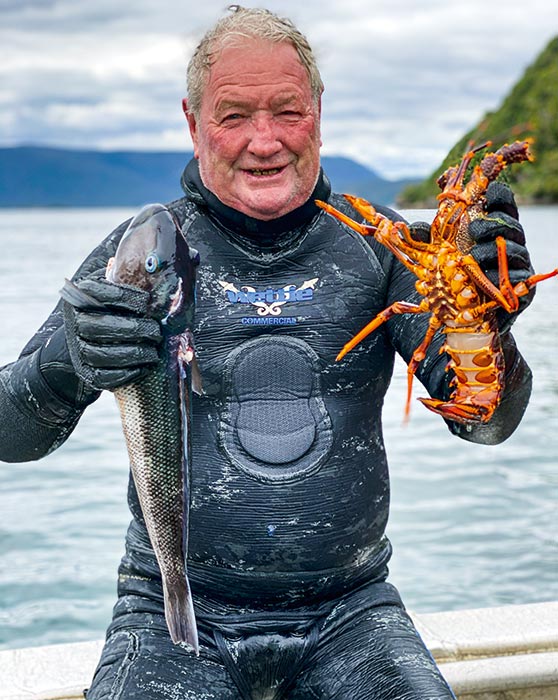 Ron Morgan, the writer's form two teacher from 42 years ago, with his first ever speared fish and caught crayfish.

There was much celebration on the surface. With his first cray and fish under his belt, the trifecta was suggested – could he finish off the grand slam and get a paua as well?

Mark was toiling away with his camera in the shallows not far from us and he let us know that there were paua everywhere.

Ron was now on the home straight, and the story was about to get better.

I knew his mates would be ready to give him a roasting back on the boat if he came back empty handed, but the paua was nailed in no time. Ron was going back to the boat with a kit full of quality kai.

The banter that night as we rolled film of Ron’s dive on the TV (I had filmed the whole process) was so much fun. Ron commentated, and it was hilarious. Robyn, our cook, put tea on hold to be part of the fun – I thought she was going to fall off the chair.

It’s moments like this that make a trip an absolute highlight. Wiremu and Mark diving together (father and son) was also special, as was being able to dive with Matt. We silently knew we were there to celebrate his big brother Paul and what he meant to the both of us. 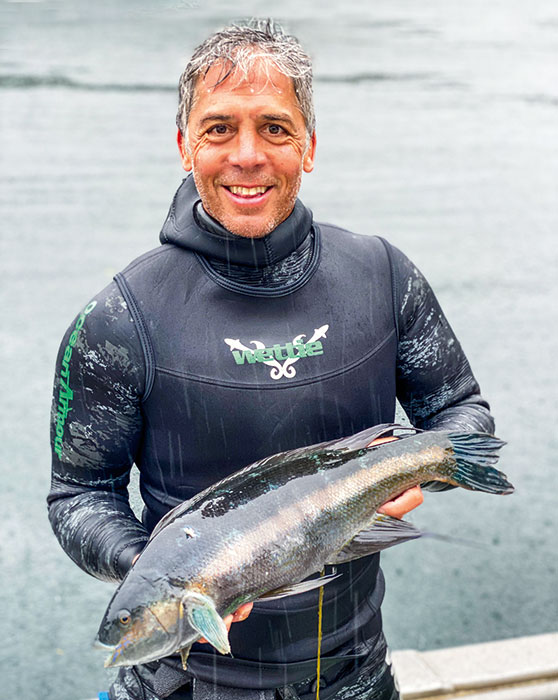 Matt stoked with his first fish on a spear.

Don’t let age be a barrier. If your health and fitness are good, find someone to get you to an exciting place and live life to the fullest. 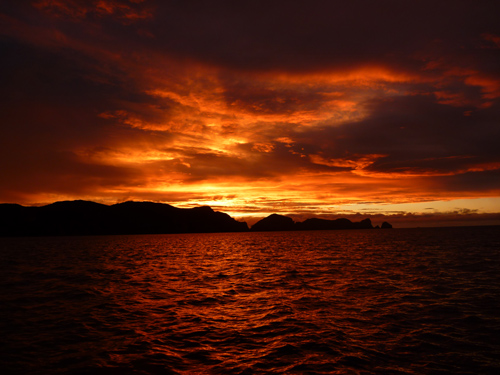