Previously, Renee Taylor contributed a feature on the trials and tribulations of a female getting into spearfishing. Here, she describes the euphoria of finally nailing her first snapper…

Ahhhhhh, finally, a snapper – and a bloody decent one at that! To think that just a few months ago I was writing about how I started my journey into spearfishing, at that stage hardly able to even load my own gun, and here I am now writing about my very first snap – I guess you could say I’ve finally graduated!

I can tell you that spearing this beauty was no easy feat, which probably explains why I haven’t been able to wipe the grin off my face since! My face is actually sore. I’ve dropped the story into pretty much every conversation since that day. I even talked about it to my boss on the Monday after when he offered me a promotion.

“So how is everything going?” he asked, referring to my current job role. I proudly answered with, “so I speared my first snapper yesterday,” to which he replied with a blank stare. I read this stare as him not quite understanding the importance of what I had just told him so naturally I continued to divulge how I executed this amazing achievement. I wonder if I’m still getting the promotion? On second thought, maybe I should have shown him the photos too? 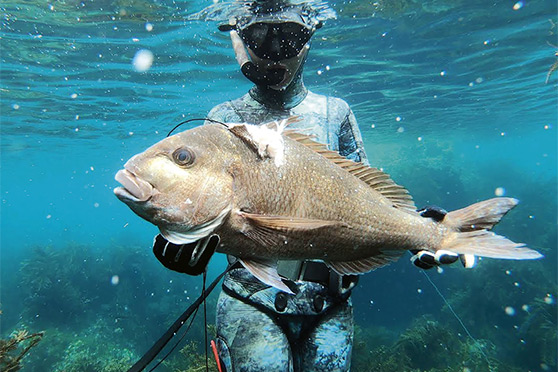 The writer with her first snapper - this spearo just cam of age!

To say I am stoked is an understatement...

I think, for me at least, the achievement is so much more than just about the snapper. The events leading up to it, and most importantly, the adventure that unfolded that fateful day – Father’s Day – made this moment so much more rewarding and memorable.

After a catch like this, it is easy to assume that some new spearo/snorkeler with a gun stumbled across a dumb fish, or had a lot of berley involved and a full set up from their much more advanced dive buddy. In fact, those were the assumptions of most. The number of messages I received asking how much berley I used, who set it up for me, or if I was just “lucky” goes to show the lack of faith in one, a dedicated new spearo; and two, a dedicated new spearWOMAN...

*disclaimer, NO BERLEY was used in the making of this snapper spearo!

So how about we go through what actually unfolded in the months leading up to the catch and then discuss what happened on that day, that glorious day?

Here are three easy steps to graduating from butterfish to snapper – all of which I employed leading up to the big day.

Keep up skills in between ocean time. One way I like to maintain a level of skill is to partake in weekly spearfishing training at the pools with the Learn To Spearfish crew! This not only helps maintain my actual skills in the water but more importantly, the chats about everyones’ trips/experiences add so much to my knowledge bank. Hearing about Jeremy’s trip to the Red Sea and the techniques used there and Haylee’s time up in Hawaii battling strong current and tides was not only interesting but gave me a lot of good information to draw on if I ever need it. Never underestimate the importance of knowledge sharing when trying to improve your own technique and problem solving skills.

Always be prepared to get wet. Jump on any dive mission you can! I don’t own a boat so will put my feelers out most weekends to find a spot on friends’ boats. No boat? No problem. A shore dive is a shore thing and it’s always just as fun of an adventure! The days of wasting away weekends from a hangover are few and far between for me now, opting rather to road trip (usually with my dog in tow) to wherever the conditions are best (and always with a dive buddy). Keep an eye on the weather, or if you’re not quite schooled up in reading weather conditions for diving yet, do what I do and ask your dive buddies what the best options are – thanks Tim and Kent. When you’re out there, watch and observe your buddy – how they move, when they stop, and what they do. Then copy and repeat!

Don’t be disheartened by the amount of snippy-snappers you see tail away. Honestly, I’ve seen countless silvery swishes. I’ve never felt so much rejection before! But remember that even getting to see the swish is improvement enough at the start. I remember the first big snapper I ever spooked. I was almost just as stoked! Every fish that gets away teaches you something new. I, for one, am very distractible so if I see a seal, a swim through, or a nudibranch I’m done. Snooping is over, I’m balls deep exploring. This is probably why snooping ain’t my forte! Persistence pays off though....

If I’d tried, I couldn’t have scripted a better day on the water. Even without the snapper it was the best. I was on the water at 7:00am with old mate Tim from Dutchy’s (if you’re ever in Tairua make sure to stop in and say hi to Tim and Caitlin) and we headed out to the Aldermen Islands where it was calm and sunny, just like summer. I’d told Tim I wanted to get a kingy of the elusive winter variety. Not too much to ask I shouldn’t think? So off we went to a couple of spots. One up, one down, like the good little dive buddies we are – to no avail though. An absolute lack of current combined with average viz had us scratching our heads. 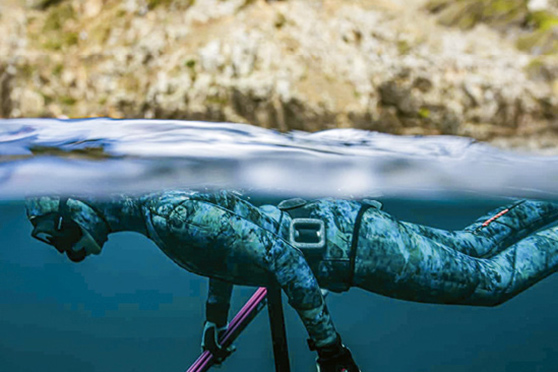 With no luck on the kingy front we decided to have a wee break, meet up with another boat and dabble in some cliff jumping. For a skinny guy, Tim pulls off a mean-as manu, that’s for sure!

Now what though? Try again for a kingfish, or head into the shallows to test our luck for better viz and some snapper. We chose the latter. I think that god of the sea Tangaroa knew that today was snapper day and stopped all currents and deterred every single kingfish in the area. It was a sign!

We went in shallow, and the viz, as hoped, was incredible. Sun rays dancing through the water, 50 shades of blue, flickering off the rocks and kelp, almost pointing out the crays and paua. While I was flapping about going full porpoise mode, Tim was of course off on the hunt.

I soon realised that I would be the reason for scarce snapper so quickly stopped my flapping about and quietly followed in behind Tim like a well-trained border collie. While he snooped, I watched, trying to learn how it’s done. At one point Tim stopped – I didn’t realise but he had seen his prize. We waited patiently, hugging a conveniently shaded rock face. It felt like an hour, and I still didn’t understand what we were waiting for. So I used this time to take advantage of the new hole in my wetsuit to refresh the day’s water situation. It had been a whole day! A gal’s gotta pee ok! And in hindsight I reckon that’s what helped attract the two snapper that eventually cruised in towards us. Pheromones, I’m sure it’s a thing.

I’d never witnessed snapper like this on a dive. They were right in front of us! I really wanted to take a nudge at one but also didn’t want to screw it up for me old mate so instead I opted to watch the master. How was he going get one without them detecting us? Ever so slowly he pointed his gun straight out, still camouflaged by the shade, then boom. Got him.

Now I’d seen the process from beginning to end, the pressure was on me to find my own. We spent the rest of the afternoon picking up a couple of decent sized paua each and a packhorse. I was beginning to get really disheartened, and a little embarrassed to be honest. It was almost 5:00pm and still no snapper... and now I could literally see the boat. The day was coming to an end. I had one last little patch to cover. I did my breathe up and dove down then up over a rock thing and slowly peered over the edge (I’m sure there’s a term for that... snooping is it?).

“Oh my god. Is that a porae? It must be a porae. Holy crap, it’s a snapper and it’s still there. How is it still there? I must be so stealthy. And it’s big… don’t panic, don’t ruin this. Move slowly, so, so slowly.”

I channelled everything I’d learned over the last few months, then pointed, aimed and shot. I got him!!

I wrangled the beautiful beast between my legs, stabbing my thigh in the process.

Tim finally realised what’d happened and swum over to high-five me, mid-wrangle. He was just as shocked as me! After dispatching the fish, almost getting my fingers bitten off and snapping that insta-worthy pic, we headed back home. A grin from ear to ear, and such a full heart – I couldn’t be happier. The icing on the cake was my nephew declaring that I was “so cool” as I walked in the door with a snapper in one hand and my spear gun in the other. 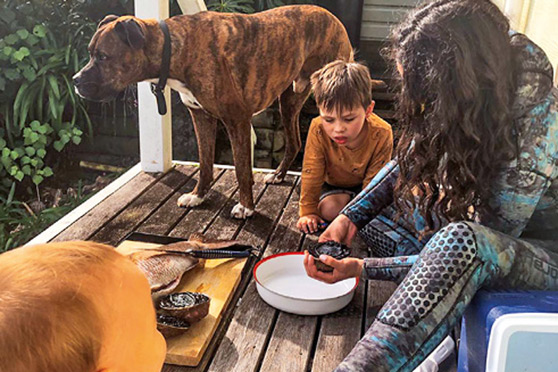 Renee was declared 'cool' by her nephew.

I’m definitely no spearfishing expert, but man am I proud and just can’t get enough! I just hope that my rookie adventures inspire more women into the ocean! 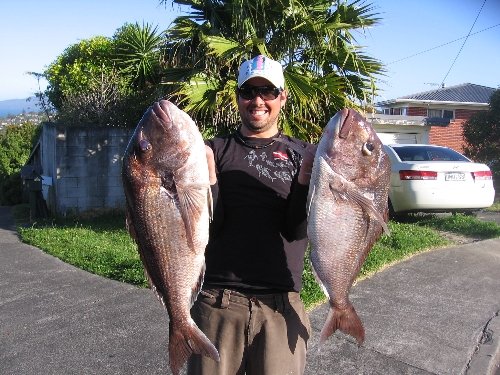