A trip to the Bay of Plenty proved the perfect opportunity for Darren Shields and his family to scope out a wide variety of species..

The Bay of Plenty is generally the first to see the good water at the turn of the year.

I had a couple of weeks late January based at the Mount and the array of underwater habitats between Mayor and White Islands were on the radar. Tuna were being caught close, among other species, so some exciting missions were on the cards.

My first excursion to Mayor was in a big swell with average viz. Fish were there, but the shark issue in dirty water was not great to deal with.

My crew of Tom, Cam and Sam took some quality fish. I managed a nice kingie of around 19kg – a great start to the trip, but I could only hope for more to come.

A few days later I went back and the vis. had got better and the swell was down. A few guys I had with me were hungry for a kingfish so we targeted these first off. I decided to take in a gun I have set up to deter sharks – an old spear with no barb. The purpose is not to kill them, but to sting their tails a little.

On the previous trip out, on almost every dive I had a shark sneak up behind me on one spot. One was so close that when it spun away from me the wash nearly removed my mask!

On the second day, I had Sam and Steve Smith with me. Sam was first into a kingfish and almost immediately three big bronze whalers were on us. I picked the biggest, dived, lined up the very end of its tail and fired. It spun away very fast, taking its mates with it! 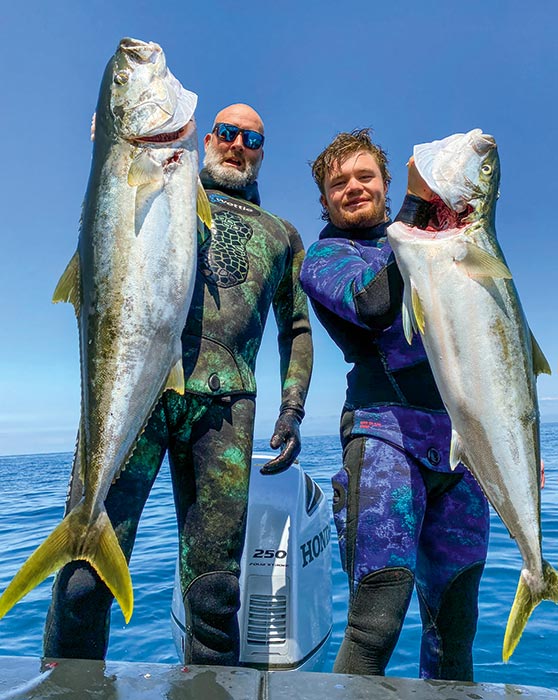 Darren and Sam with their kings taken in dirty water, big swells and lots of sharks.

That was the shark issue over for the rest of the day and when we came back a day or so later, they still seemed to give us a wide berth.

The damage to the shark’s tail was only a very small tear. There was no lasting impact on the fish but it was an indication we were not to be messed with.

I dived among some beautiful fish that day, mostly just swimming with them, taking photos and filming. Sam got a nice king and Steve a good snapper. The viz., while blue for the first ten or so metres, was hazy there on.

My son Jackson and his girlfriend Sophie came down the next day and we headed out with my good mate Paul Marlin and his son Jack. Jack wanted a king and Jacko and Sophie wanted to hunt deep for tarakihi and golden snapper.

Once at anchor, we geared up and all headed off. I worked around a reef with with Jacko and Sophie, looking out for spots where the fish tend to congregate in the current points.

We were seeing schools of kingfish constantly with fish up to an estimated 40kg. We left them alone for Jack but did get plenty of footage.

Jacko started doing deep drops to 30 metres off the edge of the reef. He soon started to find golden snapper. He took a couple, leaving the rest and we kept moving. Sharks were present but respectful it seemed. Jacko had a couple of very big ones move in on him in the deep but the ones I saw couldn’t swim away fast enough. Sophie appeared unphased and pulled some nice fish. 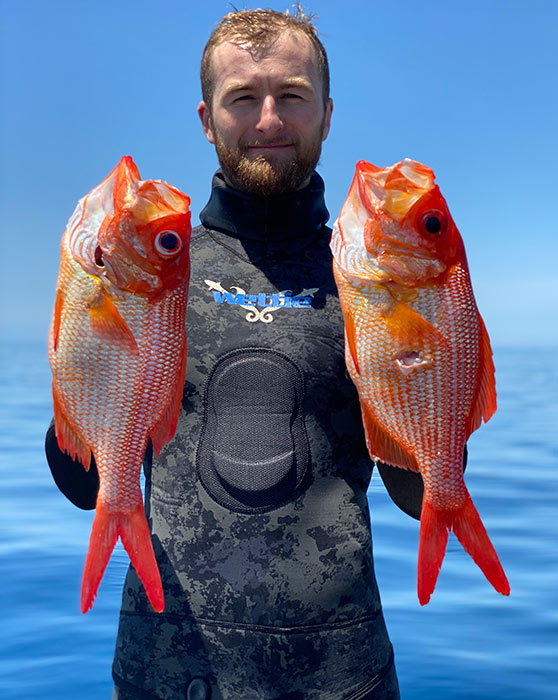 Jacko took these golden snapper off the side of a reef in deep water.

Jack wasn’t having any luck so when I got back to the boat, we moved it to an area where we had seen plenty.

Eventually one kingfish made the fatal mistake of coming in on a koheru I had speared, and Jack took his time nailing it. 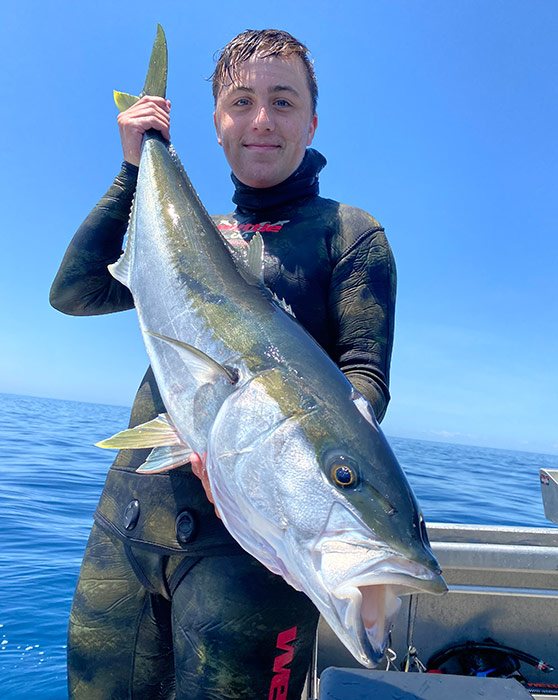 Jack Marlin with his kingfish that was lured in with a shot koheru.

We moved later in the day to dive some weed edges. The visibility today was a lot better and you could see fish on the bottom at close to 18m – it was stunning.

Weed edge diving is much easier when you can make out the edge from the surface as this allows you to dive in the correct spot each time.

Jacko and Sophie worked deep again, finding rocks out on the sand from 25m to 35m. There were boarfish, pink maomao, kingfish and tarakihi – the place was alive. 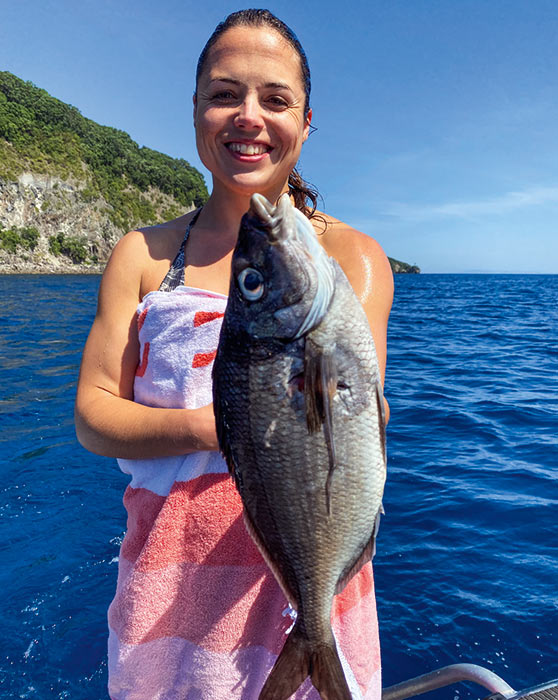 They took some nice footage on these spots and shot a few terakihi before we all decided we’d had enough.

It was some of the more pleasant diving I have had in a long time, and the forecast was for even lighter winds in days to come.

With the tuna schools running out off Whakatane, we would be mad not to explore further south...