Skippies, Kingfish and Whale Sharks: A Spearfishing Trip to Remember

To round off his spearfishing escapade to the Bay of Plenty, Darren Shields turned his attention away from the snapper and kings around Mayor Island to the skippies congregating near Whakatane. The result: a once in a lifetime experience...

The wind forecast was light, the sea reportedly blue and the bar flat – Whakatane here we come. With skippies being reported in good numbers, was there a chance of repeating the glory days when we shot big yellowfin out of meatballs behind Whale Island?

We needed to see.

We’d had some glorious diving at the Mount the last few days and were hoping White Island and the surrounding area would be as good, if not better.

Once over the bar, Jackson, his girlfriend Sophie, Jamie Wilson, my mate Graeme Leitch and I headed to the 70m mark looking for action. On the horizon I could see a big commercial boat with a plane circling above spotting tuna schools, so I didn’t need to think much more about to where to head.

As soon as we got close, I saw skippy schools all over the place. We went straight to the biggest school and after a frantic rush to get geared up, I dropped our team in front of it.

The water was blue down to about fifteen metres, and even further across the surface. You could see the skippies coming in their thousands – a fantastic sight! The hard part was targeting an individual fish. The best thing to do was to point your gun and wait for a fish to swim in front and then track them at the speed they were going (which wasn’t easy). 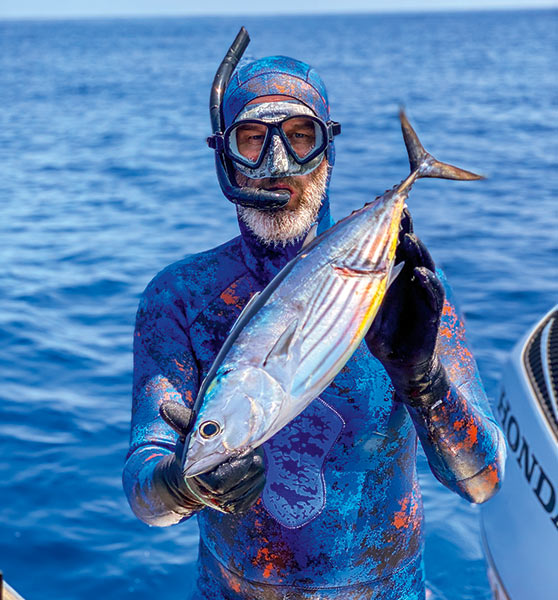 The skippies were not easy targets - the writer aimed for the head and hit the tail!

We ended up with 14 fish between the six of us, plus loads of photos and some great footage. However, there was no sign of any yellowfin or albacore. The skippies were feeding on krill but pilchards would have been better. 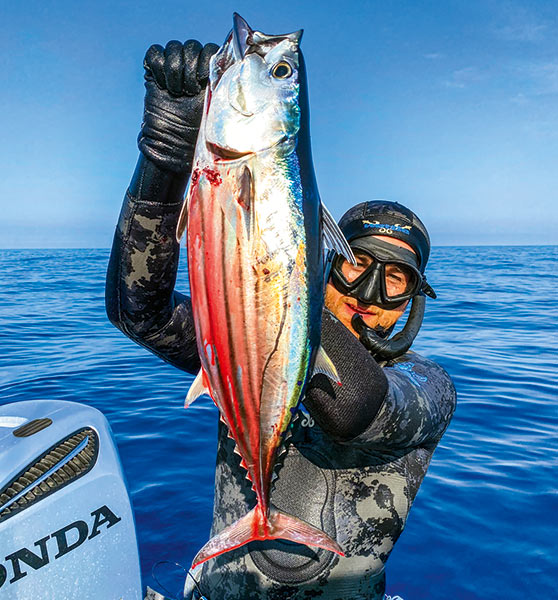 Jacko with a solid skippie.

White Island was sitting on the horizon, and we were keen to see how good the visibility and fishing were there. The sea was mirror flat, and after about 35 minutes, we glided to a stop a kilometre away from where the tragic events unfolded in December last year. We sat for a few minutes in silence. It was hard to imagine what the victims of the eruption went through on a day like today; all was semi-normal on the island. It was hard for the crew to contemplate the horror of what went on a few months previous at this island.

Eventually, we moved outside the ash cloud that surrounds the volcano and dived the top of a pinnacle that rises from very deep to a few metres below the surface. There were loads of fish and Jackson went deep straight away. He took one nice kingfish, and his accurate shot with his reel gun meant it gave him very little fight. Jamie, not to be outdone, took a nice one as well.

Jacko put his one on the boat then went back for another look down deep. On his first dive, one of the biggest kingfish he has ever seen came point blank to the end of his gun. He rolled film and got some great footage – we had enough kingfish for the day. Sophie worked deep and took a nice trevally, my favourite eating fish. This kingfish was taken off a deep pin by Jacko just off White Island.

I was keen to check out the Volkners, a group of rocks that a marine reserve was placed around. The last time I dived it, you could spear fish there. In 1999 I found a small hapuku which I filmed until he slipped off – maybe we could find another.

The visibility here was exceptional and the first thing we saw was a large bronze whaler followed by plenty of kingfish. We swam to a golden snapper gutter and you could see them outside the hole at 18m milling around – it was magnificent. Big bronze whalers glided in to check us out, kingfish drifted through the schools of koheru and blue and pink mao mao were everywhere. This was dream diving!

We swam for an hour, mesmerised, then jumped back on board, buzzing from the experience.

Moving further out wide, away from the reserve, we found schools of fish all over the surface. After using our Lowrance chart plotter to make sure we were outside the reserve, Jackson and Sophie jumped into a school of fish to see what was there.

Jackson shot a trevally over 5kg but as he did, a very large fin appeared about 100m away and was heading in their direction quite fast. I got quite a fright – was this a very big white shark?

I started the boat and moved between the shark and the two in the water, yelling, “Jump on!” As they did, the dark shape came right up to the boat and a big whale shark materialised. Wow! What a sight! It glided down the side of my boat, and even rubbed itself against the hull. Jackson and Sophie piled back in with GoPros and recorded the encounter. It was a first for me here or anywhere I have travelled overseas – a privilege, and an experience I will never forget.

To say we had a good day was an understatement! It was one of our best. 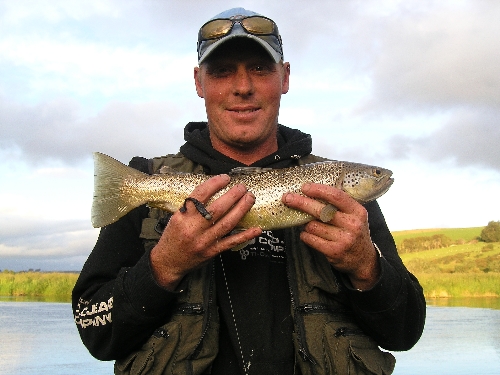 Smiles all round - Secret Spot - Back Country Stream