Over time, Darren Shields has noticed a steady decline some of the fish stocks that divers target.

Red crayfish in Area 2 are almost extinct according to scientists, and most days I don’t even bother targeting them. When I do – if I find any – they are generally small and need measuring.

On a positive note, I have noticed an increase of packhorse crayfish in some areas. Once upon a time this species was abundant and massive but with stories of commercial trawlers targeting them when on the march, and, I guess, recreational divers taking too many as well, the numbers have likely declined.

I have heard stories from my father’s era of massive packhorse being caught up to 15kg. One story I remember fondly was of Dad’s friend swimming out through the surf on the outside of Great Barrier Island in the 60s to be greeted by a mob of huge packhorse crays just standing all over the sand. They were so big he was too scared to grab one – they were nearly as big as him, was how he described it!

In all my years diving I haven’t seen very many packhorse that compare with reds. I did find one back in the early 80s that went 7kg but big numbers were a rarity. About four years ago, however, a few of us found a patch of them on a winter dive.

They were down on a weed edge sitting all over some boulders and in cracks. We filmed and photographed them, amazed at what we had found! We took only a few between us, leaving the rest. It was such a thrill to see so many in one area, particularly an area I had swum many times before without such luck.

Since then we have gone back each year at a similar time and they have still been there, plus more.

This year we found them again, but the numbers were much larger. In fact, they were in their hundreds, right up into less than three metres of water. There were many sitting right out in the open and we even found one hiding up in the top of the kelp fronds swaying side to side with the wave motion. There were packhorse on top of packhorse, cracks jammed full and sandy areas at the base of rocks with packhorse sitting all over them – it was amazing!

There were also lots of discarded shells in the same area – these crays were obviously here to malt. This meant we encountered plenty of packhorse with soft shells. The biggest we saw were approximately around 5kg. It kept six of us entertained for a couple of hours, marveling that in this day and age of depletion, there finally seemed to be an increase in something! 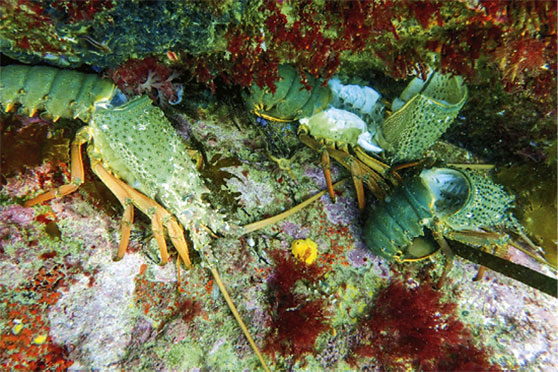 Discarded shells all over the place from the malt.

People have asked me, “Why the increase?” but I have no definitive answer. Scientists will probably have a theory but all I can think is that maybe when red cray numbers are high, the big reds target the young packhorse crayfish and kill them out to protect territory.

We took four between the six of us, leaving the rest to carry on with whatever it is they do. 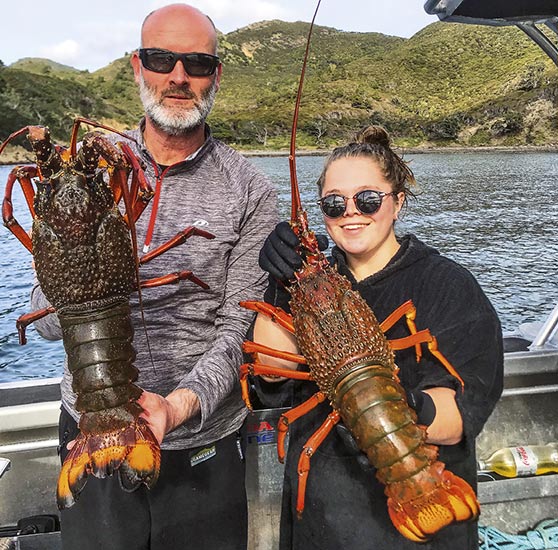 Darren and Cam with two of the four packies taken.

I want to keep going back each year to record what I find. It will be interesting to see how their numbers go. If you find spots like this I urge you not to clean them out. If the crays are big, you don’t need more than one or two for a big feed. It would be great to see them really flourish and their numbers return to how they were years ago.

Packhorse, while very nice to eat, don’t have the very rich flavour of red crayfish, but the right seafood sauce can be used to enhance their eating qualities.

The other thing to note is that packhorse crayfish are measured by the length of their tail and not their width like red crayfish are, and a packhorse has to be much bigger than a red crayfish to be legal. Make sure you understand the rules around this before catching one.

Like red crayfish, they also can’t be taken when their shell is soft or when they’re carrying eggs. It’s important we all take an active role to ensure our fishery is handed on to the next generation in a better state than it was in when we started fishing.

Wouldn’t it be great to once again see those monster 15kg packies marching out on the sand? Imagine the pot needed to cook one that big! 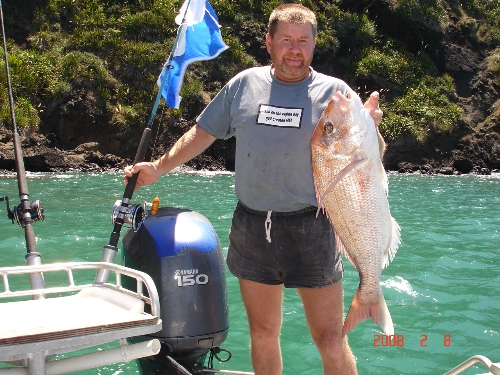