Stag hunting in the Wanaka region 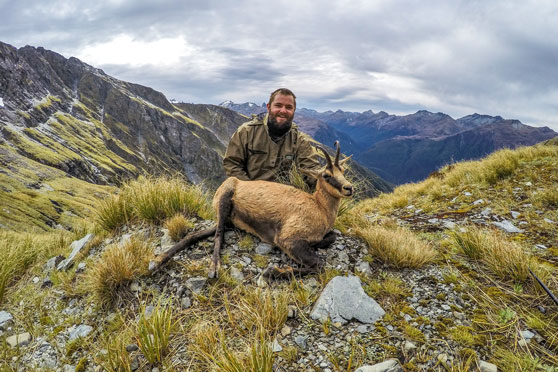 After leaving the big smoke, I flew down and caught up with my hunting mate Todd, based in Wanaka. However, upon showing him where I wanted to go, he looked at me a bit sideways and suggested we try getting around a third of my proposed route.

There would still be some kilometres to cover though, so we dumped all the extra comforts and unnecessary weight and set about getting there.

Winds to 150kmph and heavy rain were forecast for the walk in, but it was meant to dry up by lunchtime the next day. “Ah well, at least we’ll be the only idiots up there!” I said as we drove past Lake Wanaka, looking up to our hunting grounds. It wasn’t inviting to say the least. Leaving the truck, we started our trudge up the valley, and it wasn’t long before we were wet through to the bone. Five hours of undulating beech forest had now passed, and we were starting to drop back down to the main river when we finally saw our first bit of sign, an old game trail, giving us hope.

By this stage the rain had set in, and the track that ran next to the river was well and truly underwater. So, after some sliding and negotiating of mossy boulders, we reached a junction that not only halted any idea of heading further upstream, but acted as the marker for the ridge we hoped offered the easiest route to reach the tops.

After a quick pow-wow, muesli bar and water, we set about getting up to the scrub line and setting up camp before dark. Pretty optimistic, considering it was now around 5pm and the ridge was south-facing!

We had moments of progress along with ‘moments’, when thick bush lead to matagouri, followed by clambering through a large windfall, as well as ankle-breaking tree roots that swallowed our legs every few paces. This made for slow travel, especially with a big pack. It was also a bit mindboggling to have gone from open beech to windfall to climbing – and it did this for around 700m of elevation!

By the time the light had faded, we were still a couple of hundred metres from the scrub line, but tucked out of the wind in the bush was going to be as good as any place to park up for the night.

After a short search and some excavation, we managed to make somewhere to camp, then pitched the tent, dug out some trenches for the water to pass, and got the billy on.

The rain was still tipping down at this point, so off with all the kit and into the tent for the main meal, with Country Meals providing the goods.

Todd’s gear-sheading saw him without a Thermarest for the trip, but our moss excavation provided some relief – until it turned into a water bed!

Next morning the rain had eased, and we were up at the crack of dawn … not! It was gentleman’s hours before left the tent, slipped into our sodden, wet gear and threw some oats down the hatch. Then, with the tent folded and gear packed, we headed off and in a couple of hours broke through the bush line and into the tussock.

Better still, the sky was starting to clear. By this stage we were in full hunting mode, and figured the animals would be doing the same as us: getting any sun they could to dry out.

So we glassed the immediate area, but saw nothing. The terrace where the bush met the scrub looked ideal, but there was no bedding, droppings or sign of animals. We started to doubt this spot. Maybe WARO (Wild Animal Recovery Operations) had been here before us? Bugger, this might be a proper flop!

We continued to climb, aiming for the main ridge at 1800m, glassing the ground ahead of us as we went, before sticking out like a sore thumb clambering the ridgeline.

Upon reaching the top, we combed the north-facing slopes with our binos for several hours, but didn’t see a dicky bird, so climbed up and over to look up another branch.

While the clouds were still brewing, the sun was starting to break out now, and sitting in the tussock warming up and drying off felt bloody marvellous.

Another few hours passed before I finally saw a living animal with four legs.

“Chamois!” I called out to Todd. 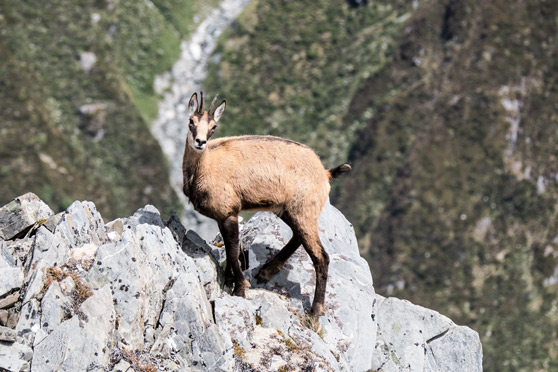 It was a good kilometre away, but I could tell it was reasonable size animal, as I thought it was a young deer at first. Their summer coat and white backside can fool you at that distance.

As we were after stags, I decided to head back up to the main ridge and keep working our way until we saw more animals. If the place had been harassed by helicopters, then our best chance was to get a good vantage point above the bush line and wait there until dark to see what emerged. Several more chamois had been seen, but still no deer.

With the day nearly over, we set our sights on a likely-looking campsite that featured a decent tarn. Then having set up camp and with dinner down the hatch, we went to our vantage point. Sure enough, just on dark a hind and its yearling started feeding up towards us. The yearling was looking mighty tasty, but was not what we were after. They fed to within a 150m of us before the light fully faded and we headed back to camp.

It was now day three, and after an early-morning glass on the neighbouring bush edges, still no stags!

Todd and I agreed that the last night was really our best crack at seeing some antlers, so with good chamois numbers about, we turned our focus to finding a decent buck as Todd hadn’t shot many before.

So we headed back up the ridge we’d come down the night before, and after some sketchy knife-edge pitches, we got to a saddle – and up popped a buck. It had not seen us, so I whipped out my camera and Todd set up his rifle. After a close look, Todd was keen to take him. So I filmed as the buck got close and closer. At 200m distance he turned broadside, everything on cue; the trigger was squeezed, all four legs of the chamois folded, and down it went, clean as a whistle. A wry grin from Todd – he was secretly stoked. 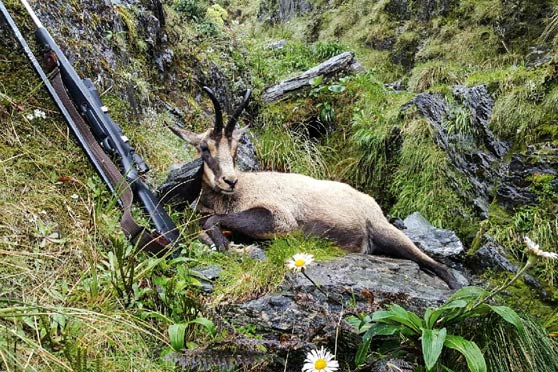 After a quick dressing and harvest, we decided to check out the next catchment. By now we were right up on the tops, which dipped between 1800-2000m – and the views were spectacular!

But this view was about to get better: tucked out of the wind, we started bumping into chamois in all sorts of nooks and crannies. As we were above them, they would get a glimpse of us and curiosity would see them walk up to check us out. Chamois don’t often see danger from above.

Relaxed about our approach to them, we literally stumbled across a young buck 20m away. While I sat back and got my camera out, Todd headed further along to get some shots with his phone. Neither of us could have predicted what was going to happen next.

First, the animal fed to within 10m of me before heading towards Todd, still feeding to within just five metres of him – to the point Todd could almost touch him. However, the chamois finally caught wind and jolted up, while letting out a whistle.

A short Mexican standoff occurred, with the chamois and Todd remaining dead still for several long seconds, before the animal finally bolted. 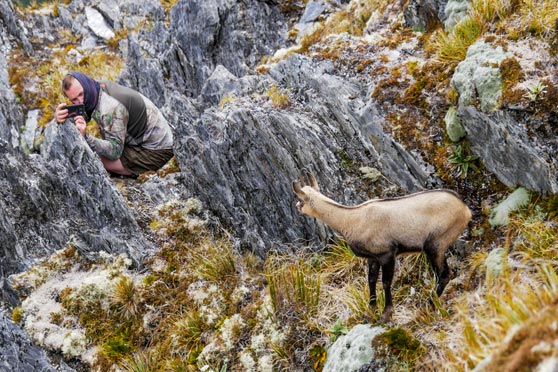 What an experience! We were rapt that it’s possible to experience nature that up-close and personal.

Our descent began, and looking at the map we could see a suitable spot above the bush line to give us another crack at any stag showing itself.

That night we glassed and continued to see chamois in good numbers. But when the wind started to howl, we went back to camp early and put a feed on. Then the wind turned to sleet and the sleet turned to snow – not great so early in February. A few more pegs and boulders were placed to hold the tent steady before hitting the sack.

We got up for an early glass as our last-ditch effort. Todd went to the open side and I positioned myself above the bush edge. An hour into the crisp morning, a loud crack broke the silence.

Eager to see what he had harvested, I stayed put for an hour longer before heading over to check it out: a nice buck, with big horn bases and 10 inches in length – what a cracker way to finish the trip!

Typically, after loading up, the rain set in as we started our 1200m descent to the road end, with a 15km walk back to the truck completing the trek. Relief – four wheels and a soft seat! It was great trip – but I’m looking forward to the roar now!

in The Boat Shed
38 minutes ago

in The Captain Morgan Briny Bar
5 hours ago

thats a goody, my beefsteaks are around 250 ,doing a lot of tangy relish,ideal for winter,yum....

Those weâ€™re great days. Remember thinking Iâ€™d beaten the old fellas one day with snapper of around 7lb caught surfcasting at Hamiltonâ€™s gap, only to find...