We have all mistakenly called something as a game animal at some point in our hunting life, although not many of us will admit it. It might have been a rock that looked like a rabbit, or the rear of a calf sticking out from behind a tree that appeared to be a deer, or even a branch you’ve had to take a second look at. For anyone who has done a decent amount of bush hunting, the one that gets us is the fern that looks like a deer’s body or back.

In virtually every case, it’s the second look that confirms it’s a case of mistaken identity for most of us.

So many people tell me I’m wrong and that there is no way they have ever made such mistakes. These people generally struggle with admitting being wrong in life. How many times have you seen a car coming the other way, thought it was your mate, and waved out?

It’s an example of ‘mis-identification’ – and it’s fine because no one was hurt, injured or killed – it was just a bonus wave received by a bemused stranger. But hunting is much less forgiving.

Here is a story I have not shared with many people. I just want people to be aware that the issue can, and unfortunately does, happen out there. A few years ago I was hunting in the South Island on a block of private native bush that backed onto a reserve. I was walking a ridge when something below caught my eye: movement through the scrub and brown in colour.

I dropped down to my knee and watched it move through the scrub. I could see what looked like a deer, but it wasn’t moving naturally – something was not right. So I watched a bit longer, and my first thought completely left my head as too much was wrong. So I called out, and a guy got a hell of a fright and yelled back!

I went down and yakked to him and asked him why he was in our private block. His answer was he was taking a shortcut through the farm. Bad decision – this was during the roar; he was wearing an oilskin with the hood up over his head, and carrying the hindquarters of a young stag over his shoulders!

While it might sound as if I am justifying the thought processes that allowed my mind to get so far in the first place, I’m actually just painting a picture of what goes on and can happen. I have even heard sobering stories of a guy who heard another hunter’s bolt close down, prompting him to call out.

Such experiences and stories mean I make even more of an effort to watch potential targets and identify them beyond all doubt before coming close to loading a round in the chamber and shouldering the rifle. After all, it may well make the difference between going home, having enjoyed your trip, or making that one disastrous mistake that destroys a family and your own life, too. So make it a point not to be wrong this year – if in doubt, shout! 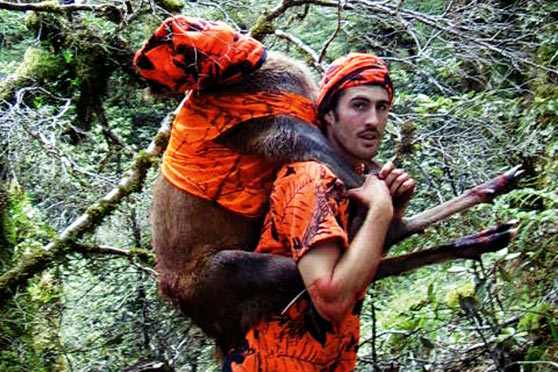 Being seen is very important if you want to help avoid being shot. I still meet people who believe if they wear camo, they won’t be seen by deer or hunters. These people are lacking a bit of IQ; if you spend enough time hunting, you learn to pick up on movement just as well as colour and sound.

Okay, now you have had the safety lecture, let’s get into it. The following tips will get you closer to that red stag this roar, involving methods and techniques that work for me, but which few books cover.

Get off the road

I recommend getting away from the roads and right in amongst it all. Get a ‘chopper in or just stretch those legs. It’s enjoyable being in an area that has low foot traffic. I have been hunting in the roar since I was 16, and it is by far the most exciting time to hunt, especially if you like the sound of a red stag giving away his position.

It’s a great feeling to be deep in the bush and have a young stag come running in, because you’re probably the first person he has ever seen. There are not many places along the roadside where they act like that.

I like to walk the ridges and listen in to different catchments and gullies, roaring along the way and hoping for a reply. It pays to be ready for a reply closer than you expect, so ensure you have a decent field of view around you. There is nothing worse than getting a reply only 30 metres away, but the bush is so thick you can’t see a thing, only listen, as he walks around and catches your scent. Gone.

There are so many options out there – everything from electronic callers to plastic moulded callers and cow horns. I personally use cow horns, because I think they sound good with my capabilities (but to be honest, red deer are not the smartest when roaring). Some people swear by rubber piping and others vacuum-cleaner hose – I have even cut plastic milk bottles – they all work.

I believe the trumpet style has its place if trying to get greater distance, but most of my roaring is close and low. If you are not confident, go with electronic callers. They have a good sound, so you only need to push a button to be in with a good chance. Just make sure it’s on the right species: a Jap [sika] roar doesn’t gain too many replies if you’re in the heart of the Ureweras!

Something that gets overlooked is the outside of the horn, or where it’s carried on your body. You don’t want it swinging around and knocking on things like buttons, zips or knives when walking.

We all stink after a few days in the bush, so be aware of the wind’s direction. It can change so quickly, but as long as the stag doesn’t get the wind going his way, you’re fine.

Nothing is going to let a stag know you’re nearby more than your scent. So, when walking ridges, be sure to look in low saddles. This is one of my favourite places to find animals. I like to stay just up out of the saddle with a view of its lower section and just wait. Look at your watch and give it 10 minutes staying still. Then roar – I try to throw my roar from left to right, so it’s harder for him to pinpoint me. Then I wait another five minutes. If there’s no movement or replies I carry on.

It’s worth learning about up-draughts, back winds, and how the wind travels in gullies. When I first started out, I often used to blame failure on the wind changing direction, but a lot of the time it was actually me not understanding the wind’s movement at the bottom of a valley as opposed to up at the ridge.

Try to minimise your profile. I personally like to lean on a tree or shelter behind it, peering around the side. It is good to break up your outline, as nothing looks more obvious to a deer than a person standing out in the open. If you don’t have a tree, just get low and avoid making a silhouette.

A major part of enjoying the roar and making the right decisions involves having a good sleep. Ear plugs can make all the difference between a good sleep and a bad one.

If fly camping or in a tent, it can be really hard to go to sleep with the stags roaring and keeping you awake all night. However, if you are in a hut, the mouse in the wall or a mate snoring like a chainsaw about to blow a piston will keep you awake. In both situations, ear plugs are invaluable.

If you become sleep deprived, it’s sometimes worth having half an hour’s sleep at lunchtime. A good rest can recharge the batteries amazingly well and give you the energy to get over that next hill. Good meals help, too.

Red stags are very active during the roar and will cover plenty of ground. If you come across a tree with evidence of rubbing, don’t park up and wait. Just slow down, keep your eyes open, and look for more sign. Some of the rubbing you see on trees could be from when they were stripping velvet a few months back, rather than marking the area.

If you want to know what the true situation is, crouch down by the tree or look for a bare patch at the base – I call these pads. If the pad smells pungent, it’s probably a marking tree. Should the latter be the case, I normally back out of it a few metres and find a good spot to wait. I then let out a low roar and wait for about 10 minutes. Keep your ears sharp though, as they like to sneak around the back of you in this kind of situation and get your wind without giving away their position.

Wallows are also worth waiting by at this time of year. These can be anything from a small mud patch to a large tarn in the tops, or maybe a backwater on the side of a lake or pond. When you come across one that has been used a lot, sit back off it and watch for a while, then give a short, low roar. Again, I normally turn my head while roaring so it’s tricky for him to pinpoint me. Deer have good eyesight, so stay still and watch.

There are many things you can read about becoming a better hunter, but my advice is to just get out there and learn. Above all, though, stay safe, because if you do, you get to hunt the roar again next year and for many years to come.

in The Captain Morgan Briny Bar
4 minutes ago

in The Captain Morgan Briny Bar
19 minutes ago

About to start building a 5.2 mtr x 3.6 mtr timber green housein the back yard, just ordered 20 x Dutch Buckets and Nft rails and...

in The Boat Shed
2 hours ago